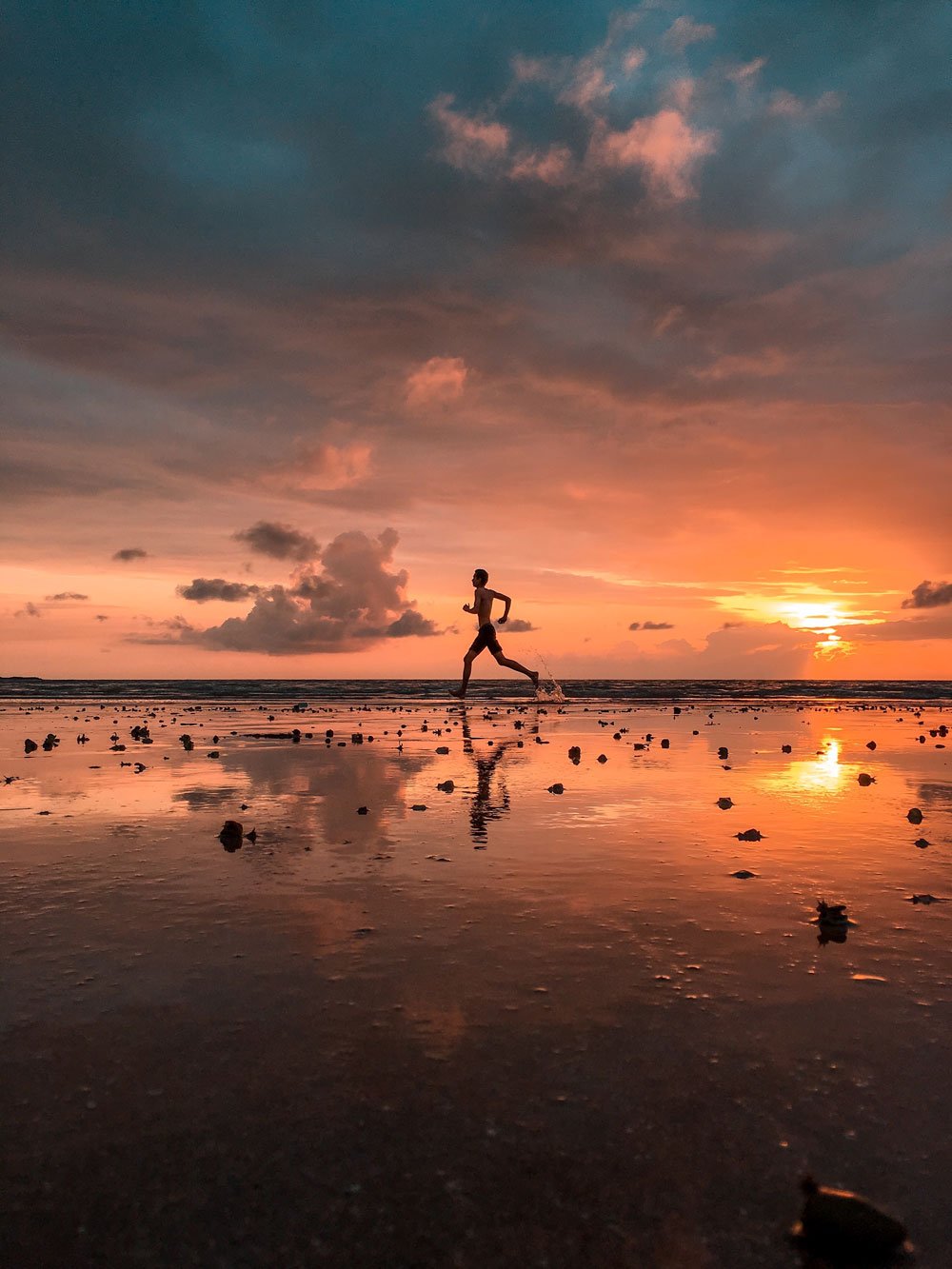 Today’s guest post is a bit of a tear-jerker. Theodora blogs over at Preppy Runner (and is also a running coach!) She’s run 7 marathons (+ over 30 halfs!) Today she is sharing her (very personal) story of how fitness (in her case, running) helped her to cope with one of the hardest times in her life. I wasn’t prepared for how emotional the post would make me – I found myself crying at my desk as I sat down to edit it. Thanks Theodora, for sharing your story with us… I for one, found it incredibly inspiring.

Like so many young women, I started working out for vain reasons. I wanted to look good in a bikini. I was 26 and a bridesmaid in a friend’s wedding in Aruba, and I was sick and tired of being the fat-but-funny one, hiding under my cover-up on the beach.

I hired a trainer to lose those 50 pounds, and I remember him saying at the time “one day, working out will be just like brushing your teeth for you. Just be a thing you do; you won’t think about it.” I rolled my eyes at him, mid-lunge. “Oh, OK, Joel…”

But, he was right. As time went on, I grew to crave those endorphins and needed my fix every day, especially when I had a bad day.

It’s that addiction to endorphins that helped me survive the worst year of my life, 2017. (In addition to lots of wine, therapy and crying on friends’ shoulders.) In the span of five months, I had to give up my dog, I lost my mom to ovarian cancer, my summer fling dumped me (just six weeks after my mom died), and finally, I was laid off.

My mom lived close enough to me that I was able to attend many of her doctor’s appointments and chemo sessions with her. In her last few months, she stayed in the hospital nearly more nights than not as her body slowly shut down. My dad and I sat by her side, holding her hand, distracting her and running to the nurse’s station to do whatever we could to keep her comfortable.

Watching your mother slip away as cancer ravages her body, taking with it her dignity and independence, is devastating. It’s sad, it’s gruesome and it’s scary. I hated the lack of power I had over the situation and the barrage of emotions I felt. The only power I had was how I reacted to the situation. That metaphor about the oxygen mask and needing to take care of yourself so you can take care of others is so true.

At 34, I was becoming a caretaker to the woman who had taken care of me for 34 years. A role I never imagined I’d need to face in my 30s. I jumped into it without thinking: asking her doctor the hard questions and then making difficult decisions with my dad like whether or not to put her on hospice, and eventually, the details of her funeral.

I wanted to run away, but that wasn’t an option, so I ran. And ran some more. I ran before every single doctor’s appointment or chemo session I attended with her. I ran so hard the night before she died — after months of feeling everything, I wanted to feel nothing. I ran through the thick fog of my tears the morning after she died, attempting to understand this new order of my world without my mom.

None of those runs did anything to make her better. If they could have, I would have run across the country and back. But at best, they tempered my emotions a bit; at worst, they gave me something to look forward to for me on a tough day. They were something I could control. No matter what happened that day, at least I ran, is what I told myself so many times last year.

And running gave me goals and hope of life moving forward, especially after she died. So much of grief and loss is mourning the past (though it’s also mourning the life you thought you’d have.) Signing up for races kept me present and looking to happy moments in the future, rather than thinking of everything my mom won’t be there for, like if I get married one day.

I’m sort of addicted to putting my name in the NYC Marathon lottery, and I found out in March that I’d gotten in. My mom died July 8, right around when I should have started training. Though I was still running, I couldn’t really count 2-3 milers with cry breaks as training. And on some level, admitting that I was running the marathon meant that my #1 cheerleader really wouldn’t be there, and I didn’t want to face that fear initially.

But I was going to be sad no matter what that day thinking of how she’d been there for five of my six marathons before that. So I might as well get a medal and accomplish something, right? (That combination of runner and grief “logic” is a real special one, I know.) Logging long runs gave me so much: a feeling of familiarity after my world had been upended, time with friends, a sense of accomplishment. It’s so hard not to feel happy and accomplished after running double digits.

And running 26.2 miles through my city was the best day of my 2017. I love the NYC Marathon; I love the cheers and the energy. I ran the entire race with a dear friend by my side, and we just chatted and caught up for 4 hours and 49 minutes. We crossed the finish line holding hands, and I immediately started crying and wrapped her up in a sweaty hug.

Grief takes away so much, but it also leaves a few sweet gifts in its stead, one of them being gratitude. Once you lose someone important to you, you become so acutely aware of how fleeting the good times can be, and you are grateful for all of them.

Crossing that finish line, I was grateful for so much — my own health, the city I love and the millions of spectators, Leah for running the entire thing with me, the friends who cheered me on the day before at my charity team’s brunch. I was so sad that my mom wasn’t waiting to meet me at brunch for a big hug and to tell me how proud she was, but I was so grateful for the times she had been able to do that, and for the friends who were there to attempt to patch up that hole in my heart.