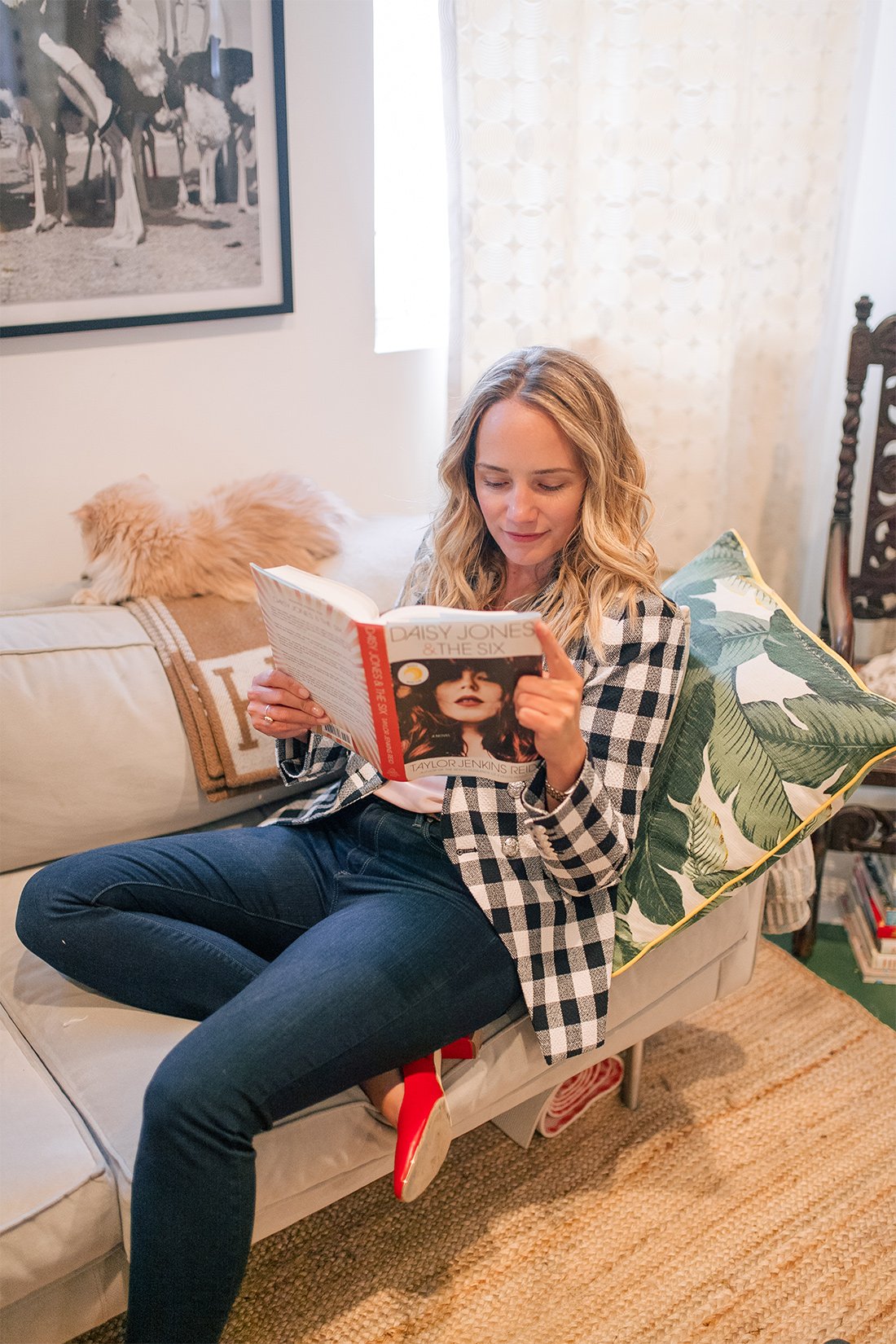 It was a lot of meh this month. A lot of reading (8 books – 3 of which I read during my 3 days in Mexico!) but a lot of meh. I hate saying that but also want to be honest I LOVED The Idea of You so so much. And The Mother-in-Law was surprisingly good. (I only say surprisingly as I hadn’t heard much about it) Everything else ranked in the B range. Not BAD but not knock-your-socks-off great, either.

Last month was definitely a better month of reading if you ask me. I think the other problem was that I just had SUCH high expectations for Daisy Jones and the Six and More Than Words that I ended up feeling a little bit let down by both. It’s hard when you expect so much from a book… it’s almost unfair! They’re both very good books – they just didn’t quite measure up to other books by those authors.

PS – I got a comment about this last month so just wanted to make it very clear – if you listen to a book club episode of our podcast, there WILL BE SPOILERS. I thought this was clear, the point of those podcast episodes is to talk about the book in full and have a discussion about them, but wanted to make it extra clear as I had a reader who didn’t realize this and felt bad about that!

Every month I update it with everything I read – it includes every.single.book I’ve read in the past few years. The best part is that you can filter + search by genre (memoir, light read, historical fiction, thriller, etc!) to find exactly what you’re looking for. I always add whatever it is that I’m currently reading in real time to my Amazon Shop.

I Gave In, and it was AMAZING…

The Idea of You, by Robinne Lee 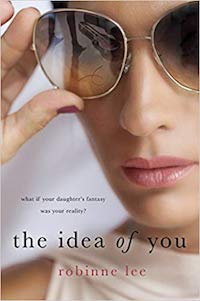 I don’t really know where to begin with this book. Becca and Ashley (Spivey) had raved and raved (and raved!!) about it but it didn’t really sound very interesting to me. (Harry Styles fan fiction!? Hard pass.) After basically being ganged up on (I’m kidding, sort of!) in the Bad on Paper Facebook group, I finally took the plunge and bought it. And oh wow. I got sucked in. It’s as spicy as everyone said it would be, but it’s also very sweet, and surprisingly well written (sorry to the author – but based on reviews I had been thinking it was going to be 50 Shades-ish).

A chic French divorcee takes her daughter to an August Moon (think One Direction) concert and through a series of events, begin a love affair. At first it’s just sex but it quickly turns into more – they legitimately fall in love. I was so (SO!) skeptical about this book but it’s the perfect trash (but still actually good!) beach read… perfect for your next vacation! I was totally enraptured by it and could not put it down. Now, I just want a sequel… UGH. It’s our June podcast book pick so be sure to read it before then! 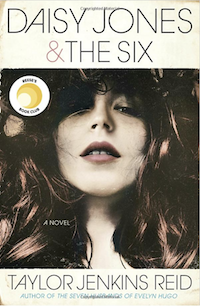 I had been waiting forever for this one. We talked about it on the podcast in this month’s book club episode. Okay first of all, I didn’t love it as much as The Seven Husbands of Evelyn Hugo. But that’s one of my favorite books of all time. That being said, I really really enjoyed it. It’s written as an oral history, so think of an old VH1 Behind the Music video where the band + their team/manager is all reminiscing back over the band’s heyday. It’s set in the seventies and has this Almost Famous kind of vibe to it.

Daisy Jones is this stunningly beautiful singer who winds up working with The Six. We heard it’s based a little bit off of Fleetwood Mac. Daisy has a drug problem, Billy (the lead of The Six) is in recovery… but combined, they make (musical) magic, with a whole lot of sexual tension. I don’t want to give anything away but it’s a really fun read. 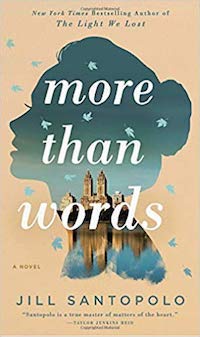 More than Words, by Jill Santopolo.

Okay first of all, I still think about The Light We Lost. In my circle, that book was a little bit polarizing. Some thought it was annoying, other people really related to it. To each their own. I was more meh on this one. Don’t get me wrong – I enjoyed it, but similar to Daisy Jones it didn’t live up quite as well to my high hopes. It’s still worth reading, though! Nina Gregory is a wealthy hotel heiress who always does the right thing. Dates the right guys, does the right thing for her career, etc etc. But when her father passes away (leaving behind a couple massive secrets) her whole world falls apart and she finds herself changing.

She’s torn between her boyfriend Tim (who was also her childhood best friend) and her sexy politician boss Rafael. If you’ve read her other book, you know Santopolo does a love triangle really, really well. It is an enjoyable for sure, but in my opinion fell a little bit flat. I didn’t love the ending and I felt like the characters could have been better developed… but that didn’t stop me from reading it in a single day.

Two That Are Seriously Screwed Up. 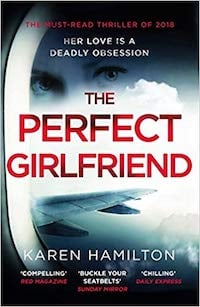 Okay this book is so messed up. Like so messed up. To the point where I wasn’t sure if I liked it as parts were really really implausible. But that didn’t mean I didn’t spend an entire flight tearing through it. It was also fun/weird to read on the plane as so much of it takes part on planes as the two main characters are a flight attendant and a pilot. Elizabeth is dead set on getting her boyfriend back and goes to extremes to do so. Like, a lot of extremes. She has one of those personality types where she fixates on things (friends, boyfriends, etc) and it’s just SUPER creepy and messed up. You cringe and feel secondhand anxiety for her all the while being like “WOW IS THIS REALLY HAPPENING!?” It’s not the best thriller I’ve ever read but it still definitely held my attention. Crazy stuff. 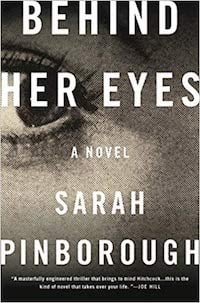 Behind Her Eyes, by Sarah Pinborough

I had put the call out on Instagram stories – asking if anyone had read anything as creepy and disturbing as Verity and several of you recommended this book. I don’t know how I’d missed it, I mean.. Stephen King blurbed it! Julia is struggling – she’s a single mom and a receptionist. Her husband has remarried and nothing is really going her way. But then she’s out one night and meets (who she thinks is) the man of her dreams; only to find out that he is her (married!) boss. So the book gets off to an awkward start. She then meets Adele, and strikes up an unlikely friendship with her.

Adele and her husband are new to the neighborhood and they definitely have secrets. He’s controlling, Adele is always on edge. It has serious Couple Next Door vibes but it’s a completely different book. If you’re looking for something dark and twisty this is your perfect psychological thriller. I will say that it does venture into fantasy territory; something I’d ordinarily love but wasn’t prepared for, especially for a thriller. So the book becomes a bit implausible.

If you have a strained relationship with your Mother in Law! 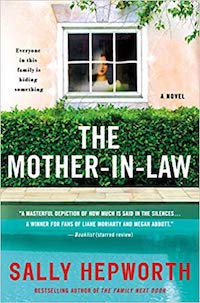 The Mother-in-Law by Sally Hepworth.

Fans of Liane Moriarty are going to love this one. I borrowed it from my friend Kate while on vacation and read it in a day. It’s a fast, fun read with a mysterious twist. Lucy marries Ollie and all she wants is to have a close relationship with her mother-in-law, Diana. But Diana is hard to crack. She’s polite and friendly but not warm and fuzzy, and she definitely has more of a tough-love approach with her kids. Fast forward years later and the mother-in-law is dead. Alternating between past and present it is the story of Lucy and Diana’s complicated relationship and ultimately a murder! What I liked about this book is that both characters come across as very endearing. I actually think that reading this book could be helpful for someone who has a strained relationship with their own mother-in-law. But there is a small twist (and a murder), and though I guessed who the killer was, I still really enjoyed this book, mostly for the complicated family dynamics! 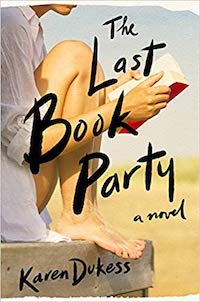 Okay so of course I was intrigued by this one – books, summer, Cape Cod? It sounded right up my alley and it was set in the eighties in Truro, where my family vacationed when I was young! Eve (formerly a secretary for a publishing house) leaves New York and moves into her parents’ summer house in Truro where she takes a job working as a summer assistant for a prestigious author. She’s immersed into a world she’d always dreamed about (Truro’s creative elite) and all sorts of chaos ensues. I don’t want to give too much away but everything sort of explodes and falls apart – it’s an epic catastrophe. For that reason, I could see this translating very well to film. I really enjoyed this but it was a little bit slow for me.

The Second in the Seasonaires Series. 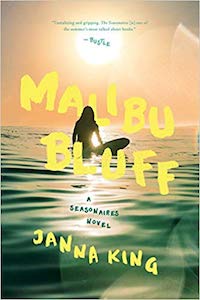 Okay I am not really quite sure why I kept reading this book but I did. Honestly, I had enjoyed the first Seasonaires book but this one fell really really flat. I was simultaneously a little bit bored but also having a hard time keeping track of all the characters. I don’t know why it was so hard (and I didn’t have this problem with the first one, I gave the original a solid B). But this book fell very flat for me. I almost put it down several times but needed to know what happened (whyyyyy).

I was invested in the main character’s story line. So I wanted to know what happened but none of the other characters really appealed to me so I found myself slogging through just to get to the end. I powered through and I liked the ending but I don’t know, this book annoyed me.