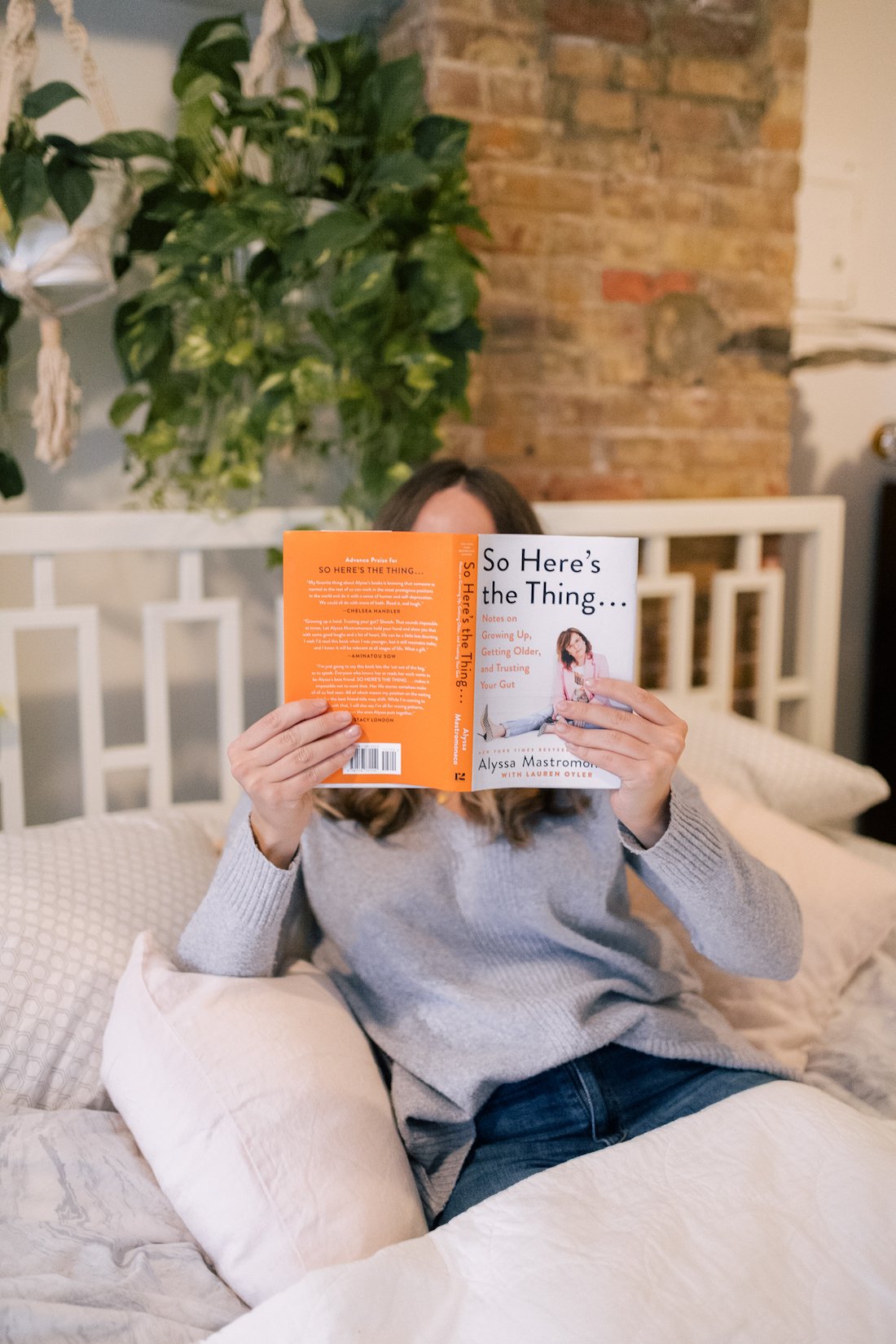 This was a great book of reading (and you can tell I was traveling as I definitely read more than usual!) I still can’t stop thinking about Verity – it left me totally shook! WOW. Colleen Hoover has definitely established herself as one of my favorite authors. And of course Alyssa Mastromonaco’s new book (pictured above!) is an absolute must-read. I read a lot of other fantastic books though – this reading list has it all: thrillers, drama, memoirs, magic, and two great literary reads.

Every month I update it with everything I read – it includes every.single.book I’ve read in the past few years. The best part is that you can filter + search by genre (memoir, light read, historical fiction, thriller, etc!) to find exactly what you’re looking for. I always add whatever it is that I’m currently reading in real time to my Amazon Shop. And, check out last month’s reading list, too. 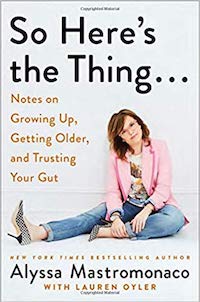 So Here’s The Thing, by Alyssa Mastromonaco.

If you have been reading here a while, you know I LOVED Alyssa’s first book, Who Thought This Was a Good Idea. Like, really loved it, buying copies for several friends. You can read my review of that first book here. If you aren’t familiar with Alyssa, she was Obama’s Deputy Chief of Staff and is now one of the co-hosts of the Hysteria podcast (from Crooked Media). What I love about her is how she manages to be so incredibly accomplished and aspirational; while also being refreshing and relatable. This book of essays covers everything from her friendship with Monica Lewinsky, to IBS, to how Jennifer Aniston got her through a breakup. I think her real message though is that you can be successful, you can be a badass (and work for the president if that’s what you want!) while still being yourself. And that’s a message I think women of all ages could really benefit from… we need more of this! So naturally, I really loved this book. And if you listen to our podcast on Wednesday, she is our guest! (Ep 47!) This book is a must-read for women of all ages – it’s informative and empowering but also hilarious.

A New Favorite Author whose books will you destroy you in the best way. 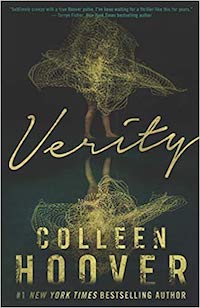 Holy crap. This book. It left me completely paralyzed at the end. I actually had to go out and leave my apartment and have drinks with a friend because I needed to have someone to talk to. Wow. This book. Lowen is a struggling writer who receives the opportunity of a lifetime: to finish Verity Crawford’s best-selling series. Verity has been in a horrible car crash and will likely never recover from her accident. Prior to her accident, the family suffers terrible loss: losing one daughter and then the other. Lowen moves up to the family’s Vermont house to go through Verity’s office and find any material she can use to begin the remaining books. But then she finds Verity’s autobiography; containing horrible secrets. Lowen struggles as she finds herself more and more attracted to Jeremy (Verity’s husband) and contemplating whether she should tell him about the manuscript. I am not going to say anything else as I don’t want to spoil it for you, but there’s a huge twist and then another twist. This book was brilliantly executed and I STILL can’t think about it. Definitely tune into episode 45 of the podcast to hear Becca and I chat about it in greater detail! 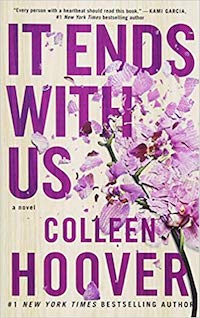 It Ends With Us, by Colleen Hoover.

After reading Verity, I wanted more Colleen Hoover. Cassidy (my old intern) recommended reading It Ends With Us, saying that it destroyed her. (Um why am I such a masochist, WTF!?) I will start by saying that if you have experienced domestic abuse it could be triggering. This is the story of young Lily who grew up in a household with an abusive father. She moves to Boston and becomes immediately successful at just 23; opening her own successful flower shop. Then she meets dreamy, sexy Ryle. He’s a neurosurgeon and complicated – not wanting to be tied down. They ultimately fall in love but then her first love comes back into her life. It’s dramatic and upsetting and I don’t want to talk too much about the specifics of the plot to give anything away but it’s about domestic abuse; and hard to read at times – there are parts where I had to tell myself “Grace, it’s JUST A BOOK.” If you can handle this, I highly recommend it.

The Weird but Beautiful One. 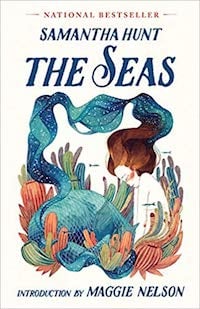 The Seas, by Samantha Hunt.

Okay, I finished this book and was like WHAT DID I JUST READ!?!? How to even describe it. This is a feminist fairytale of sorts; originally released in 2004, a little ahead of its time. It was re-released in 2018. It’s so beautiful. The writing is exquisite, almost like poetry. But also, I couldn’t tell what was real and what was fake. It’s set in a northern coastal fishing town (In envisioned the most northern parts of Maine) and it’s the story of an (unnamed) nineteen year old narrator. She’s a misfit, living at home with her mother and grandfather. When she was young, her father disappeared (walking into the ocean and never returning); but he’s told her that she is a mermaid. She clings to this belief and water is an omnipresent theme throughout. She’s in love with an Iraq war vet, Jude – he’s thirteen years older than her. The romance ultimately lands her in jail. I struggled to understand what was real and what was a dream; and whether she was insane in the real world or sane in a magical one. It’s a little weird but I couldn’t put it down and would definitely recommend it (and would love to hear your thoughts if you’ve read it!!!).

The one about magic. 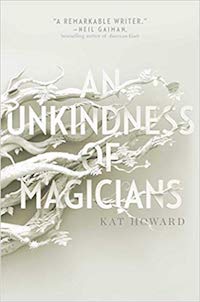 An Unkindness of Magicians, by Kat Howard.

If you’ve read here long, you probably know that I love magic. And this book did not disappoint. I wasn’t sure whether to classify it as YA or not, as it definitely felt more adult (kinda like the Discovery of Witches books.) This is set in modern day New York except there is this whole Harry Potter-like magical world that the “mundanes” cannot see. And every twenty years there is what they call The Turning, where a big tournament (a series of duals) between the magical houses. The Turning comes early this year. Our heroine Sylvia emerges from The Shadows (but you will learn what that is), appointed champion by one of the smaller houses. She’ll face Ian Merlin and Grey Prospero (from two  of the larger, more established houses). Secrets emerge, and Sylvia has quite a score to settle. At first I found it hard to keep up with (so many characters, so many magical terms, but once I settled into a groove with it, I couldn’t put it down!

The buzzy literary one. 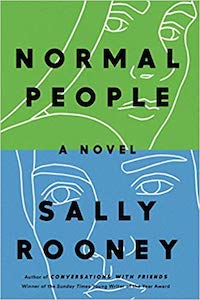 I was lucky to get my hands on this one a bit early as Book of the Month asked me to review it for them (it’s one of April’s picks)! It’s hard to put this book into words but it really just captures friendship and dating (especially those weird relationships where you care deeply about a person but aren’t actually together). This novel is raw and real and also a little bit political. Connell and Marianne meet in high school. Connell is the popular one; Marianne is the outsider – the weird girl that no one wants to be friends with. They develop a secret romance of sorts; you can tell they both care about each other but don’t want to acknowledge it. The book follows them to college where the dynamics shift – suddenly Marianne is the popular one.  Throughout, they try being together and not being together. It’s depressing and sad at times but also so realistic – the characters are so relatable. I really loved it and I won’t spoil the ending but it had me thinking for days afterward! We are discussing this one on the podcast in a couple months and I can’t wait.