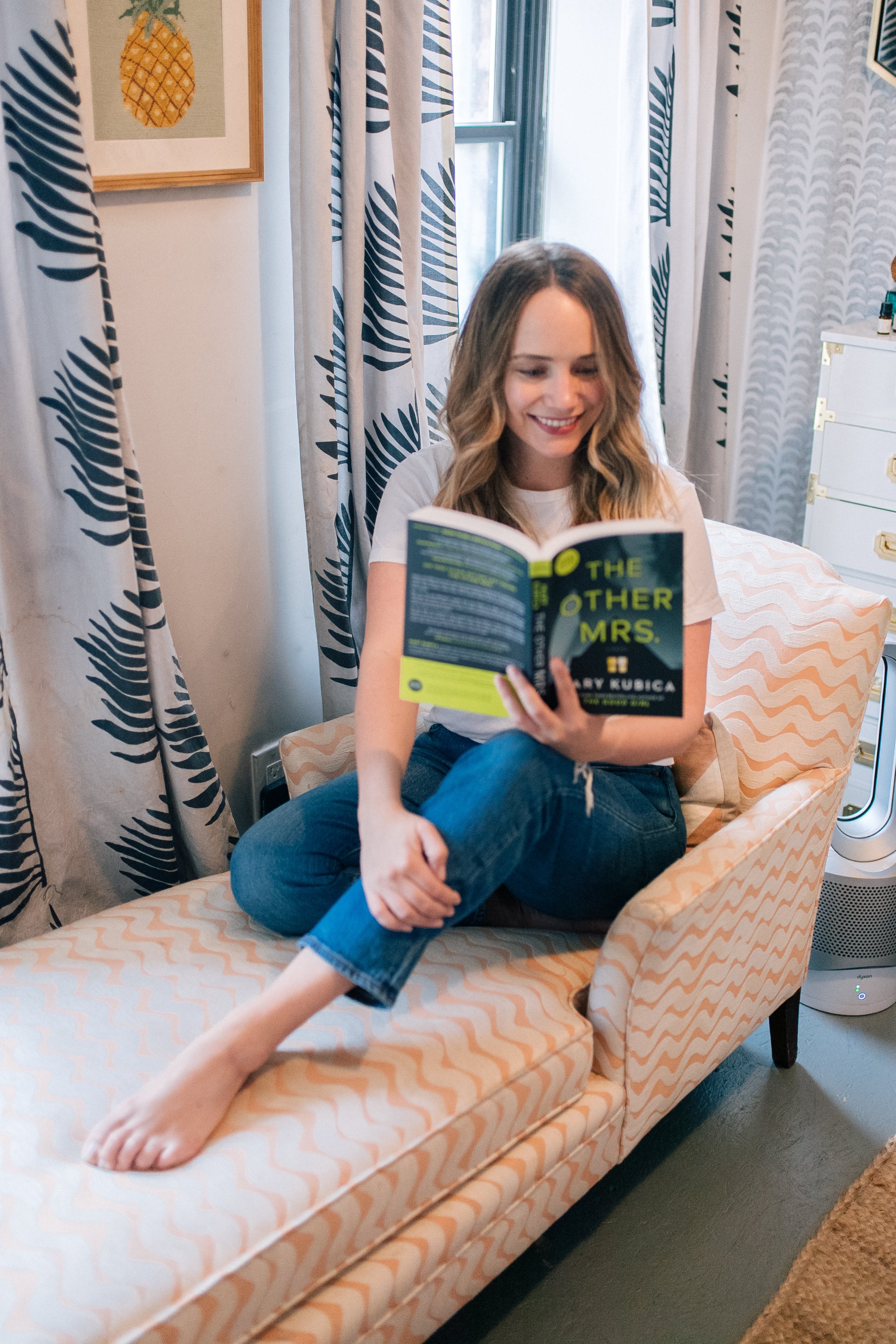 I felt back in the groove with reading this month! January was just a medium month of reading- I read some really fantastic books, but didn’t prioritize reading the way I usually do, and there wasn’t anything that kept me on the edge of my seat / up all night which you know is always my goal!

Everything I Read in February 2020

This month was very different. The new Greer Hendricks + Sarah Pekkanen book (You Are Not Alone) was definitely a standout for me. Not because it’s great literature or is going to win any awards but because it’s exactly what I needed/wanted in terms of a twisty thriller that would keep me up all night. I loved it so much.  Honestly though, everything on this list is pretty great! You know my rating system can be tough… if it gets an A- or above it’s a must read, a B+ it’s still very good, and everything this month was a B+ and above!!!!

TELL ME WHAT YOU ARE READING! I’m always looking for great recommendations… I love reading your comments!

Every month I update it with everything I read – it includes every.single.book I’ve read in the past few years. The best part is that you can filter + search by genre (memoir, light read, historical fiction, thriller, etc!) to find exactly what you’re looking for. I always add whatever it is that I’m currently reading in real-time to my Amazon Shop. If you’re feeling like you need even more book recs, check out last month’s list and everything I read in 2019! 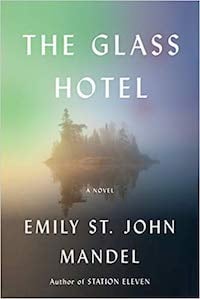 This one was a contender for a book club pick for March or April. We ended up not choosing it because we felt like it wasn’t a conversational enough book (meaning that we’d have a lot to say about it!) but it was still really good. Emily St. John Mandel is such a gifted writer! This one opens at the beginning with a woman falling from a boat to her death. Throughout the book there are a few things at play: a massive Ponzi scheme, the woman’s death, and two half siblings growing up in a small town in Vancouver. It all seems unrelated at first but there is a connection.

My favorite moment of the book was one line, delivered by Jonathan Alkaitas’s wife Suzanne. If you read the book, you will know exactly what I am talking about. It stopped my in my tracks! The storyline was great and I couldn’t put it down but what I loved most about the book is how well the author manages to get into the psyche of each of her characters. They’re all so complex and interesting. Lastly: a lot of people asked if it was as good as Station Eleven and I don’t know! I haven’t read that yet but it’s on my list to eventually read! 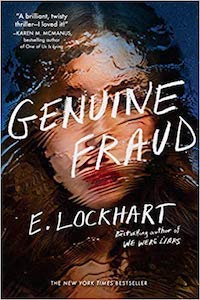 This author writes twisty YA novels that make you think and always leave you a little bit devastated. (I absolutely LOVED We Were Liars, it gutted me!) Without revealing too much, I would compare it to The Talented Mister Ripley, told in reverse. (If you loved Social Creature I think you will really enjoy this.) It’s a quick read at only 288 pages, but it still won’t take you very long to read as you will just NEED to know what happens next!

It opens with Jules, living at a hotel in Mexico. But she’s not going by Jules, she’s going by Imogen, who is supposed to be her best friend. Except where is Immie? And why is Jules on the run? Lena Dunham calls this “an addictive and shocking feminist thriller,” which is the perfect description. And I really loved the way that it was told, starting at the end and working it’s way back to the very beginning. It kept me on the edge of my seat and kept me guessing the whole time. 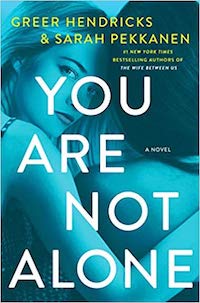 You Are Not Alone, by Greer Hendricks + Sarah Pekkanen

This thriller scratched a BIG itch for something that would keep me up all night, keep me guessing, and so on and so forth. These two also wrote An Anonymous Girl and The Wife Between Us (two FAVS – I couldn’t put either one down) and I had been saving it because I knew it would be good. I was right, it was such a fun thriller, without falling into the more common thriller tropes (I haven’t seen a plot line similar to this one, yet.)

This is the story of lonely Shay – nothing is going right for her. She’s lost her job, she’s unhappily single… she craves closeness but just can’t find it. One day, on her way to an interview, she’s waiting for the train and witnesses a woman committing suicide. She becomes dangerously obsessed with the woman’s story (who is she? what drove her to do this!?) Through her personal investigation into Amanda’s life she meets her two friends, Cassandra and Jane. Cassandra and Jane seem to have everything figured out. They’re smart and glamorous, own their own boutique PR firm, and have a wonderfully close-knit group of girlfriends in the city. She finds herself getting closer and closer to them… but something is amiss. I won’t say anything else but if you love a twisty thriller, this is the book for you!!!! 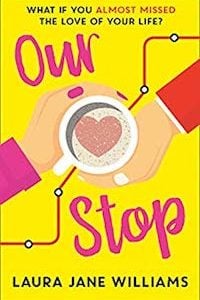 Our Stop, by Laura Jane Williams

Becca convinced me to read this one, and I’m so glad she did! British chick lit is not my usual genre, but this was such a fun read, sort of akin to One Day in December (but a lot more lighthearted- One Day in December got pretty dark at times!) Reading this is like a warm hug.

Nadia takes the 7:30am train every.single. morning. Daniel does not, but when he sees her on the train, he knows that she is “the one.” He places a missed connections ad in the newspaper, which Nadia’s friends send to Nadia. The two begin corresponding through the missed connections section, whilst encountering each other IRL in between… but they keep missing each other (and also getting scared off by misinterpreting certain things). The “will they ever find each other” drama really heightens, with a very satisfying ending. This is a really fun, feel-good read that you can do in a single Sunday. I loved it! 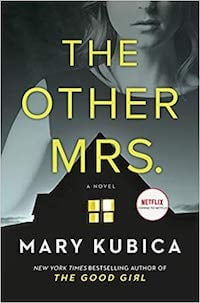 The Other Mrs. by Mary Kubica

This was another fun one that I’d been eagerly anticipating. You might remember Mary Kubica from The Good Girl, which I absolutely loved. This one was not QUITE as good as that, but still very good and still kept me on the edge of my seat of anticipation.

Sadie, her husband Will, and their two sons move from Chicago to rural Maine when Will’s sister commits suicide… leaving behind a big empty house and an angry sixteen year old daughter, Imogen. We know their family life isn’t exactly perfect: Will’s had an affair but swears he’ll change. Meanwhile they are living on a tiny little island where Sadie is a doctor. One day, their across-the-street neighbor Morgan is brutally murdered. No one can explain it and weird things keep happening. Sadie swears she’d never met Morgan, but their neighbors claim to have seen the two women arguing. And so begins a twisty spiral. This has it all: murder, an unreliable protagonist, and lots of twists and turns. I really enjoyed it. AND it’s being developed by Netflix! 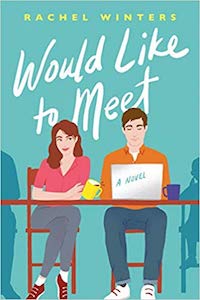 Okay wow, two British chick lit books in one month? I am going to blame Becca for this but I can’t say I’m actually mad about it… these books are so cute and definitely scratch a certain sort of itch.  This one was a contender for our March book club pick for the podcast and while we did not choose it, I definitely recommend reading it as it was very cute.

Evie Summers is a 29 year old assistant to a big time film agent and they’re in a bit of hot water. Their biggest client, Ezra, has committed to writing a rom-com and hasn’t delivered. The whole firm is in danger and Evie is in danger of losing her job, so she makes getting Ezra to write her job. She commits to inspire him by staging her own meet-cutes and writing about them for Ezra. They go through all the rom-com tropes. Will spilling orange juice on a stranger result in true love? What about renting a ramshackle cottage like the one in The Holiday? And so on and so forth. In between she meets Ben and his sweet daughter Anette. It’s a very cute rom-com and a bit rambly and sometimes predictable, but altogether very satisfying and fun. I loved it! 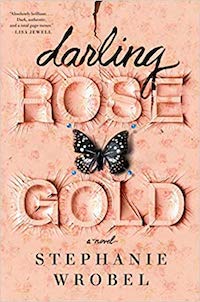 I was really excited about this one as it involves Munchausen by Proxy which I’ve become grotesquely fascinated by after reading We Came Here to Forget and watching The Politician. Trigger warning: hurting a child. Rose Gold grew up thinking she was sick, only to discover later on that her mother Patty had been starving and poisoning her to keep her sick and needing her. After a dramatic court trial, her mother is locked away in jail – still denying that she ever committed any sort of crime. Five years later, her mother is released and Rose Gold agrees to let her stay with her. But there’s a twist. Rose Gold isn’t the weak little girl anymore. She’s stronger now, and she wants revenge.

This book is very twisty and pretty messed up and you are never really quite sure who the true “villain” is, which I loved. I tore through it, starting it on a Saturday night and finishing it Sunday afternoon. It’s definitely a bit upsetting at parts (I don’t want to give anything away but it’s quite disturbing!)

This was my non-fiction pick of the month! I would describe it as writer Marisa Meltzer’s memoirs on her relationship with her body + diet culture interspliced with a biography of Jean Nidetch (the founder of Weight Watchers). I knew it would be interesting, but was a little bit worried that the book would glorify diet culture (something I am not so big on) but was pleasantly surprised.

The book is a really interesting look at Jean Nidetch’s life (she was such a colorful character and impressive woman; though Meltzer doesn’t glorify her but rather looks very honestly at her life and some of the mistakes she’s made. It’s also a very honest, raw account of someone who seems like someone I’d want to be friends with – a cool, funny, feminist woman and her history with her body (she was first put on a diet at age five). What I love most about it is that it doesn’t have all the answers and it isn’t preachy.

It’s a realistic look at what it’s like to be a woman who wants to lose weight in an age where society is simultaneously obsessed with both beauty/thinness AND being body positive. Becca and I have talked on the podcast about how anti-feminist it can feel to admit you have body hangups OR aren’t feeling great about how you look OR  that you want to lose weight. I really like how Marisa Meltzer is so honest; admitting her struggle with this. If you’ve ever felt this way, this is the book for you!

photo of me by Carter Fish!