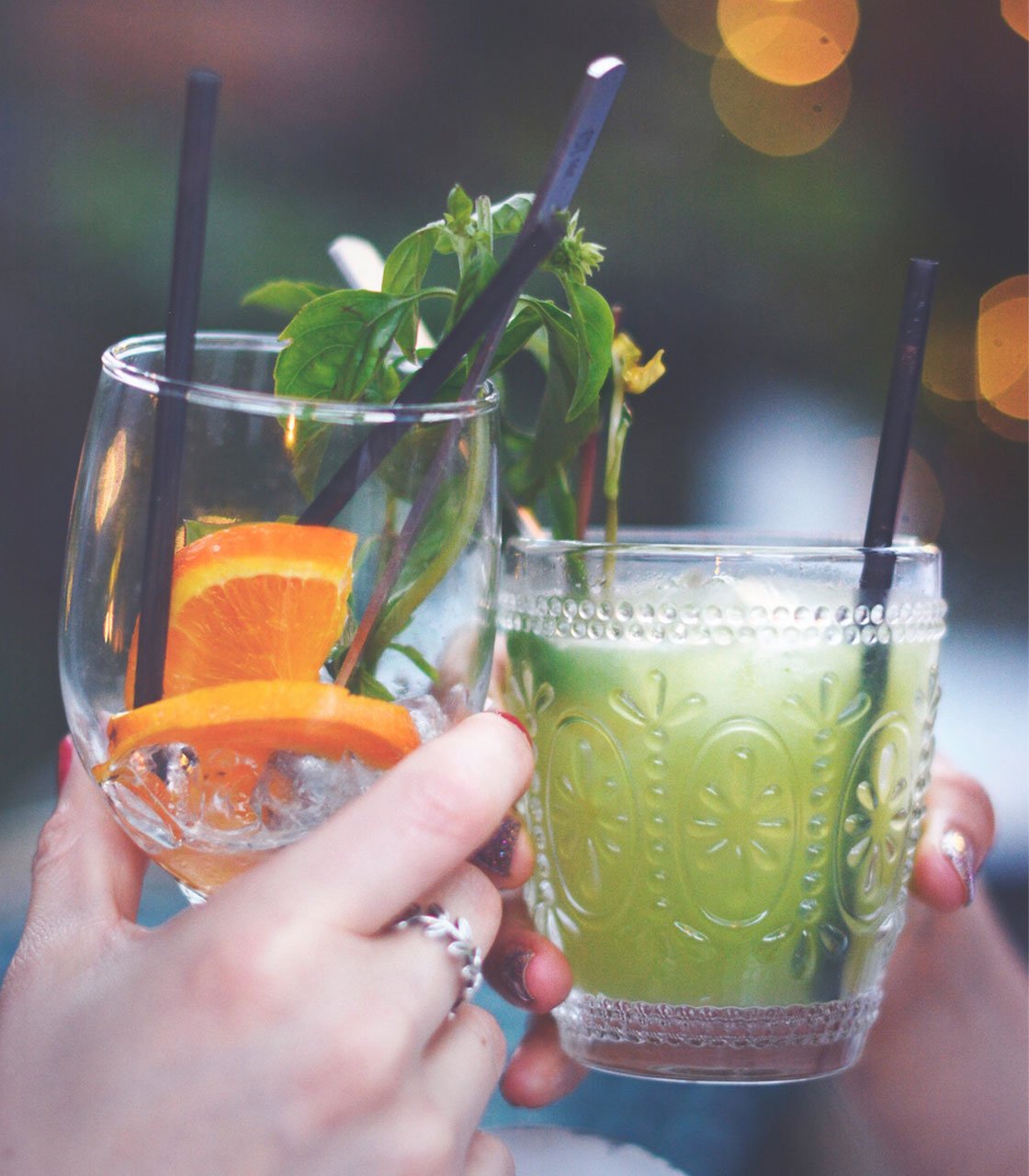 If we’re being honest, I met January 1st with lots of relief, as I knew that a) I was putting together this wellness challenge and would be spending the next three months really committing to my health, and b) I would be taking a full month off from drinking.

Writing about drinking is always a funny thing (and something I typically avoid as it’s like parenting advice, pregnancy advice, etc etc – everyone has an opinion! If you drink too much you have a problem, if you don’t drink you are uptight/not fun.)…  WHATEVER. I’m always totally honest here and am just a regular person (not an expert) just sharing my own personal opinions and experiences. My opinions don’t have to be your opinions… as Amy Poehler said, “Good for her! Not for me!” I guess I get nervous as around this time last year I wrote a post about being healthier and outraged a bunch of people by saying I would never be able to take a month off of drinking.

The thing is, I was just being honest, and at that particular moment in time, taking a month off of drinking sounded totally impossible. That was where I was in life. I was going on dates + blogger events like crazy (and you guys I’m sorry but blogger events are the worst. Everyone is on their phones, no one is talking to each other, I’m always the oldest person in the room.) I can see why I felt like I had to have a drink… maybe I should have just said no to the event… (but that’s something we talked about here. Protect your time, friends!)

My outlook on drinking and dating changed a few months ago, when I went on a really fun date with a guy who was taking a few months off from drinking as he started a new job + got back into shape. We had so much fun. We got coffee and talked for hours and hours. It was probably the best date I went on all year, and it was only a simple coffee and a walk. It made me realize you shouldn’t rely on booze to make a date fun. If you need it, that person is probably not your person. Things didn’t work out with that guy but meeting him definitely brought about this mental switch – it took going on a good sober date to get me there. If you missed it, I’ve since wrote a post about sober dating where I crowd sourced cute date ideas + stories from you guys. All of those ideas are so much more creative and fun than just drinks!

But anyway, I woke up on January first just feeling so relieved to be taking a breather from drinking. The holidays with my family were amazing (but that also involved drinking our way through a LOT of the restaurant’s wine inventory as my parents are kept the restaurant’s wine inventory when they sold the restaurant), and New Year’s Eve was a blast (but I stayed up wayyyy too late and woke up to the most disgusting apartment after playing hostess). My month off was easier than I expected, but some weird/unexpected things happened, which I thought would be fun to share here today.

I didn’t miss it. Like, at all. This was such a shocker. I love playing hostess, and I’ve always been the wine queen. The wine fridge is always stocked, the second a friend comes over they have a full glass in their hand. It took a few weeks to get used to sparkling water or kombucha as my evening “treat,” but once I made that a habit, it just became the norm. There was only one night where I missed it. I still love wine, but I was shocked by how little I missed it.

I became a chocolate fiend. Fiend. I’ve always been more of a savory vs. sweet person, and found myself wanting sweets all the time. I had to really regulate myself (most of the time), for the first two weeks. At the beginning of the month it was really bad, though. I had chocolate almost every night! By the end of the month the chocolate cravings were gone.

For the first half of the month, I was a lot more tired. I found myself going to bed earlier, and wanting naps on the weekends. One of you left an interesting comment on one of the wellness challenges (I couldn’t find it!) saying that this is normal as your body detoxes, but whether that is true or not, I definitely found myself strangely exhausted.

It’s a really good money saver. Okay this is obvious as cocktails, especially in New York, can really add up… but it was fun (to the point where it became a game) seeing how inexpensive going to dinner became! I didn’t just hole up at home because I wasn’t drinking… I probably went out to dinner at least twice a week. Sometimes it was with friends who were also taking a break, sometimes it was with friends who were still drinking. When no one drank, the bill was always so cheap.

I ate a lot more than usual and still lost weight. For the first time in a while, I didn’t really stress about food. I eat pretty healthy/clean on a daily basis, but I pretty much ate what I wanted and still lost weight. (Obviously, I was exercising every day so other things were at play, but still.) I let myself eat things I wouldn’t usually let myself have… like sharing a pizza with girlfriends, or having chocolate a little dessert at night. I will reiterate that I was exercising every day and I wasn’t exactly pigging out, but I definitely let myself eat foods I wouldn’t usually let myself have. Everything in moderation, but this was another realization. For the most part, I think I’d rather eat my calories than drink them.

I’m going to keep this going. Mostly. It really comes down to this. I realized how much better I feel when I don’t drink, and I like feeling good. So is something worth the hangover and/or feeling bloated and groggy the next day? Sometimes it is, most of the time it isn’t. For the foreseeable future at least, drinking is going to be a weekends/special occasions only sort of thing. No more mindless glasses of wine during the week just because I’m tired or stressed. It’s not worth feeling gross the next day, it’s not worth the calories, and so on and so forth.

My skin was better. Everyone said I was glowing which I didn’t really see, but it was definitely more hydrated. My skin is pretty well behaved but it does get really dry (especially my legs and arms), especially in the winter. This could be from a whole bunch of things (working out and sweating more, using a lot of bath oil in the tub) but my skin was noticeably less dry this month and I think not drinking probably played a part in that. I mean it makes sense as alcohol does dehydrate you, but I can’t be 100% sure what was at play.

Overall, I’m really glad I did this. It changed my perspective and made me more aware of bad habits and in turn helped me to jumpstart some healthier habits. If you’ve never done it and/or are feeling like your body needs a little reset I would highly encourage you to try a Dry January or Dry February or whatever… just have sparkling water, kombucha, and lots of good chocolate on hand at first.  😉