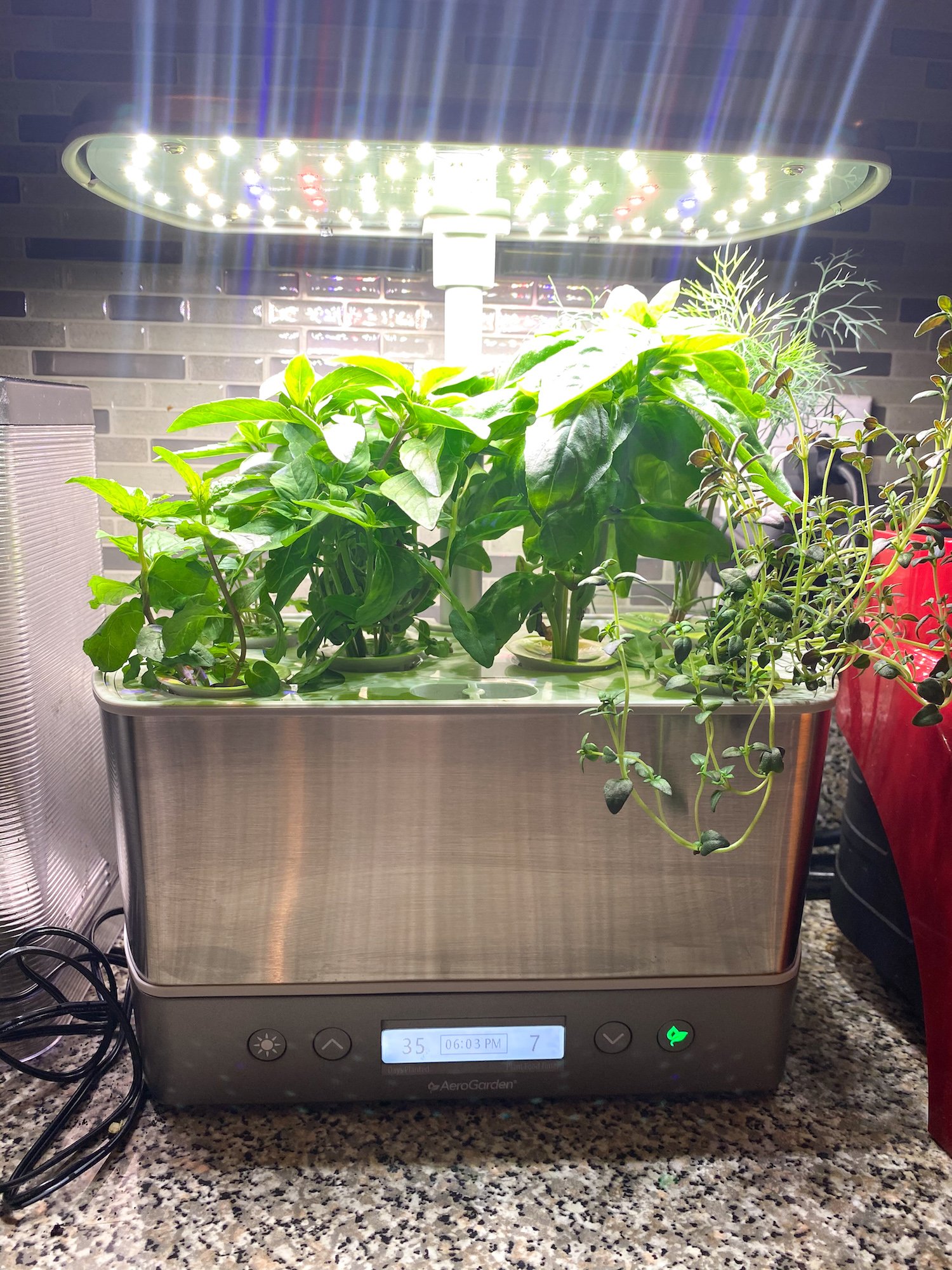 My Aerogarden was one of my favorite purchases of quarantine. Part science experiment, part useful thing I now rely upon for fresh herbs, it’s kept me both entertained and excited… and also well-fed! I was talking about this with a few friends over the weekend. I’ve gotten very into gardening (both indoor + outdoor) this summer and I think it’s because it gives me a sense of control over SOMETHING… anything!!!! (I’m admittedly a bit of a control freak and ever since the beginning of March I’ve felt totally out of control. Over everything. And so… I garden!)

I actually decided to try the Aerogarden based on a conversation in The Stripe’s private Facebook group. There was a thread started by someone looking for an indoor gardening system to grow fresh herbs. So many of you raved about it and were talking about how you were growing herbs, tomatoes, etc. I swear, sometimes you guys influence me more than I influence you! And I was really intrigued by the idea of growing plants 5x faster than with a conventional soil garden.

If you’re not familiar, Aerogarden is a hydroponic system with an LED light system (mine contains 20 watts of white, red and blue LED lights), giving plants the full spectrum they need to thrive and allowing you to grow plants year round, without any sun or soil (or gardening expertise – ha ha!) The LCD control panel makes it super easy to see how long your garden has been growing, and what it needs (water, food, etc.) An automatic timer ensures plants get enough light.

It’s impossible to mess up.

I opted to order it directly from the Aerogarden website vs. Amazon as they had a better selection and were running 20% off. (Sidebar: I’ve since noticed they are pretty much always running 20% off!!! So definitely order directly from them, there always seems to be some sort of a deal going on!) As I thought about what I wanted, the Aerogarden Harvest series appealed to me most as it has six pods. Six pods just felt like the right size for me.

(They also offer make a very cute Aerogarden sprout size which holds 3 pods, the bounty family size (9 pods), or the farm size.) You can grow so many things – tomatoes, lettuces, flowers… but I went with gourmet herbs. I loved the idea of being able to cook with fresh herbs!

I chose the classic Harvest aerogarden model. Honestly, this was more of an aesthetics and what was available decision… all of the Harvest series look nice! I really like the stainless steel one but it comes in a variety of cute colors (the mint green is so cute!). The kit comes with everything you need: seed pods, plant food, etc. With the discount, my garden was $120. 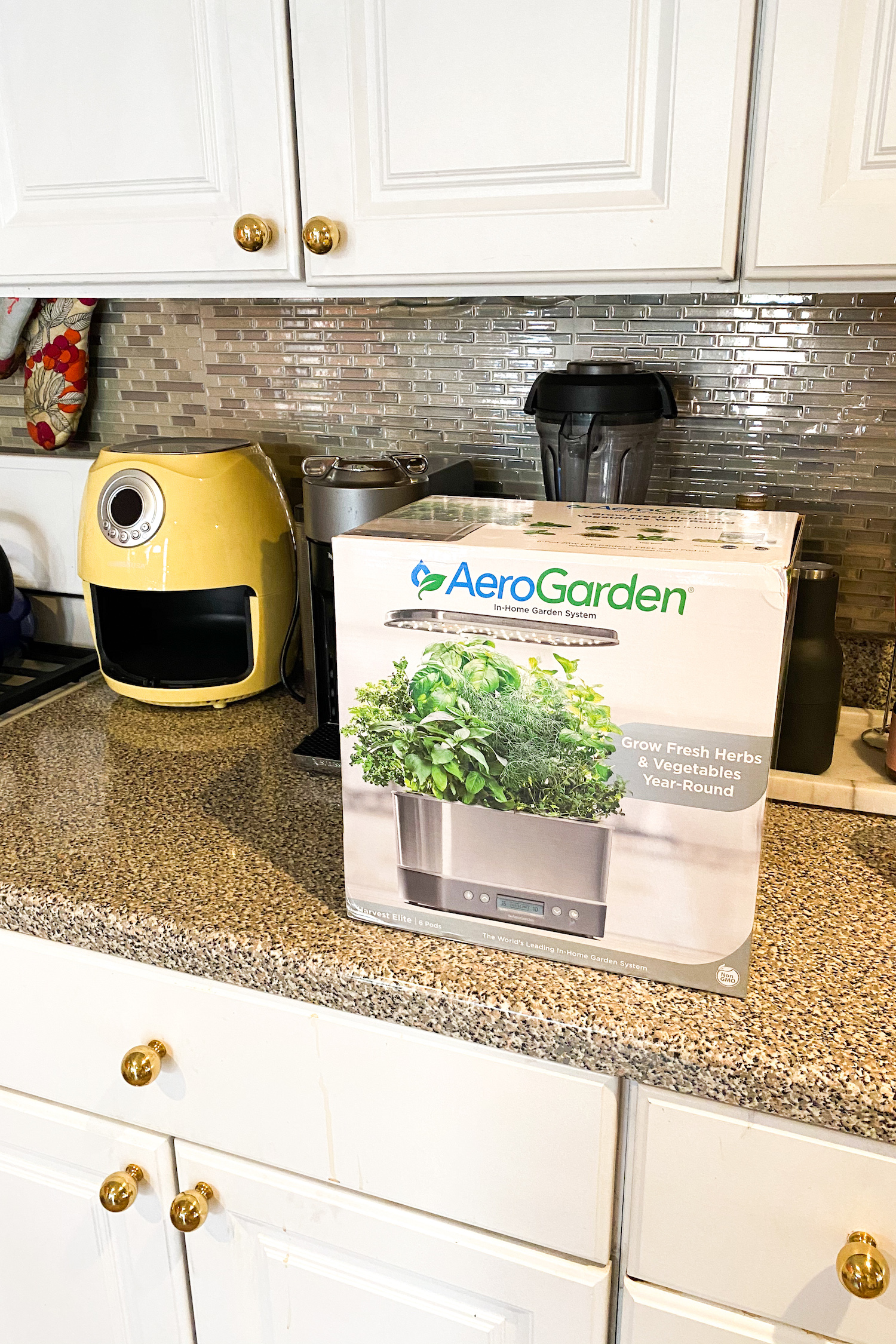 How Does Aerogarden Work?

It’s very low maintenance. Every two weeks, you change the water and add plant food. And every four weeks, you empty and clean out the water basin. All you really have to do in between is add water or nutrients as needed, prune the plants and make sure nothing overtakes the other plants… the basil is wiley and needs to be harvested a lot, especially in the beginning as it can overtake the other plants.

I do want to give a little warning as I know a lot of you also live in small spaces. The LED grow light is BRIGHT, and it needs to be on for 15 hours. It’s fine in my apartment (TBH it’s not great as some of the light still gets into my bedroom at night so I need to sleep with a mask as I prefer to sleep in total darkness), but if I were in a small studio this would be a NO. So just take that into consideration!

It’s also a little bit loud – though in a relaxing way… it doesn’t not really bother me. Now that I’ve had mine for six weeks I barely even notice it but at first it definitely bothered me. When the water is doing its thing I can hear it in my living room (I have mine in my kitchen!). It sounds almost like the faucet is dripping; I’ve had to train myself to remember that no, I did not leave the faucet on!

Is the Aerogarden Healthy?

Yes, very! You are essentially growing your own organic, delicious herbs at home. And because it’s inside you’re less likely to have any pest issues, etc. (I say less likely because a friend of mine did get bugs and had to get rid of hers.)

What grows Best in Aerogarden?

I really like that Aerogarden spells this out for you! They sell seed pod kits in a variety of different things; but they’re all designed to work specifically with the Aerogarden – making it hard to mess up. I went with Gourmet Herbs for my first go-round and will probably keep doing herbs just because I really love the convenience of having all my herbs growing fresh and healthy in my kitchen!  Were I to get a second garden (something I’m considering but don’t have space for…) I would do lettuces, 100%! I love the idea of having fresh salad greens. I’m also very intrigued by shishito peppers.

There are also so many pretty flowering options… even zinnias!

How To Build an Aerogarden

Setup is super simple. You fill the water tank up, add a capful of the Miracle Gro aerogarden plant food, pop in the herb pods, and pop on the growth caps. Maintenance is also very very easy. The growth caps come off once the herbs have grown to touch the top of the cap, and every two weeks you fill the water tank and add plant food (the plant food comes with the kit but you can buy more!). Then, you just empty and clean the whole tank once a month. EASY.

The garden takes care of light (so good if you don’t have a lot of natural light!!) and watering. You could literally leave for two weeks and be fine.

How to Start Seeds in Aerogarden

The seed pods make it so easy. There’s no stress. Literally just (very carefully) pop in the pods. The garden takes care of the rest. They definitely sprout at different times (you’ll see this below, but curly parsley and mint took forever to sprout… though once they did, wow did they GROW!

How to Clean Aerogarden

My trick for cleaning the basin is to fill up a big bowl of water ahead of time. Then lift out the plant tray and balance it on the ledge of the bowl. That way you can clean the basin properly without worrying about disrupting the plants and their roots too much.

I thought it would be helpful to do a little diary. So for five weeks, I took notes and photos to document the growth process. It’s pretty cool to watch the progress!

It was slow going for the first seven days. Both basils sprouted enough so that I could take the growth cap off, and thyme sprouted a tiny bit. The rest of the herbs were NOTHING so I was a little nervous!

Okay, week two is where the magic happened. By Day 14 (above) all 6 plants have sprouted. The Genovese Basil is a monster (well, a mini monster) and I’ve pulled off a few leaves to try them (for the record, home grown herbs definitely taste better, ha ha). The mint and the curly parsley took the longest for me to grow, but they’ve popped up above the soil. The dill will get its growth cap off in a day or two. It’s wild looking at both basils – I can’t believe how much they’ve grown in just a week! 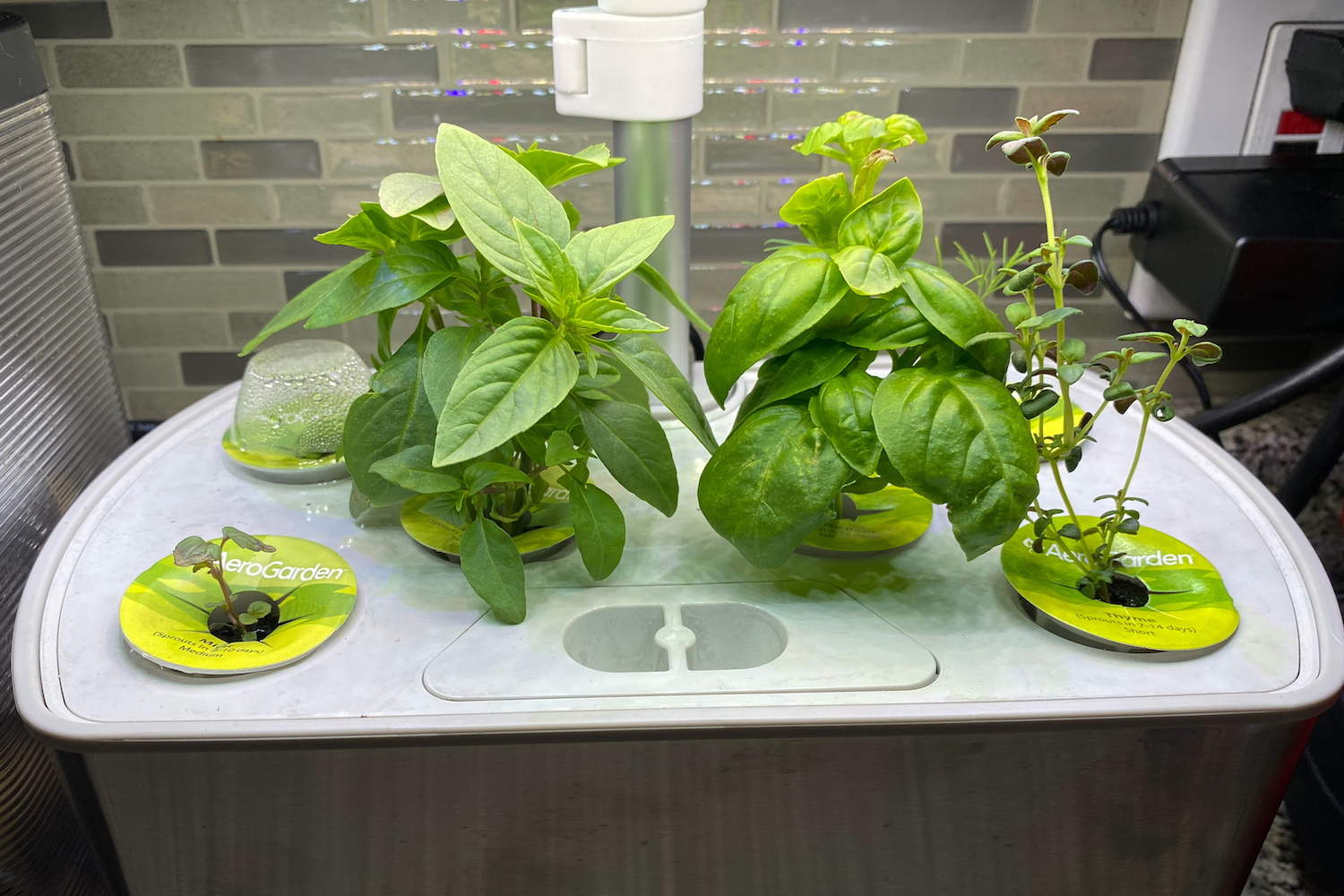 During week three, I had to harvest both basils as they were overtaking the rest of my babies! They’d grown to touch the light, and I didn’t want to raise the light until the rest of the plants had grown. The thyme grew a bunch, the growth cap came off of the dill and the mint… but curly parsley still has its growth cap on! 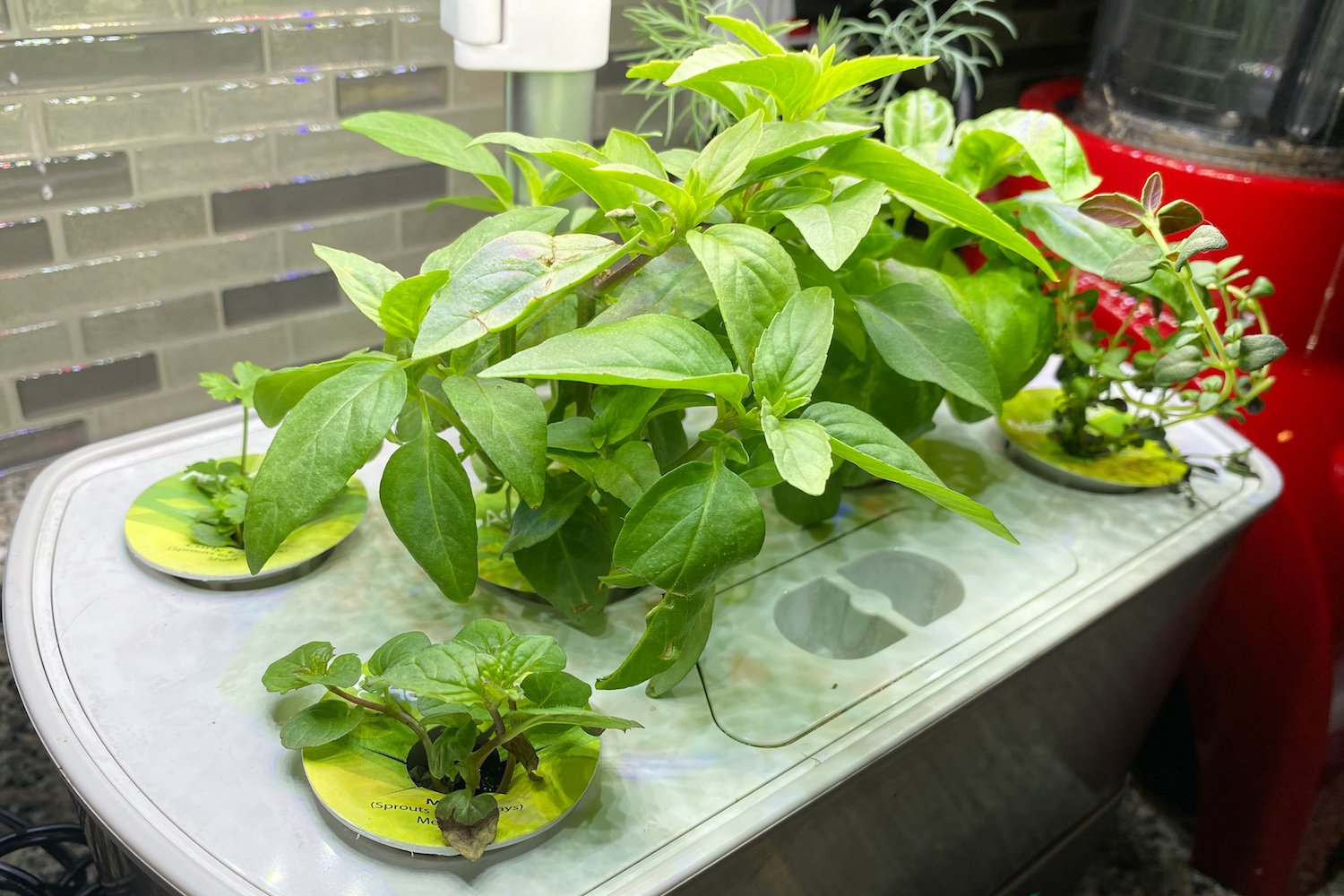 After four weeks (28 days), the growth cap FINALLY came off of the curly parsley! The mint is growing nicely as well. I had to prune the basil every other day as it was growing so quickly – which I was fine with, it was nice to have fresh basil in all of my salads.

My mom had a good tip: as you harvest the basil, if you don’t want to use it, stick it in a jar or tupperware with some olive oil in the fridge and you can make pesto with it when you’re ready. The thyme was growing in a weird direction so I pruned that as well and it’s much happier. I’ve been letting the remaining plants (mint, curly parsley, dill) just do their thing and hopefully catch up to the basil so that I can eventually raise the light and let them all get bigger together! 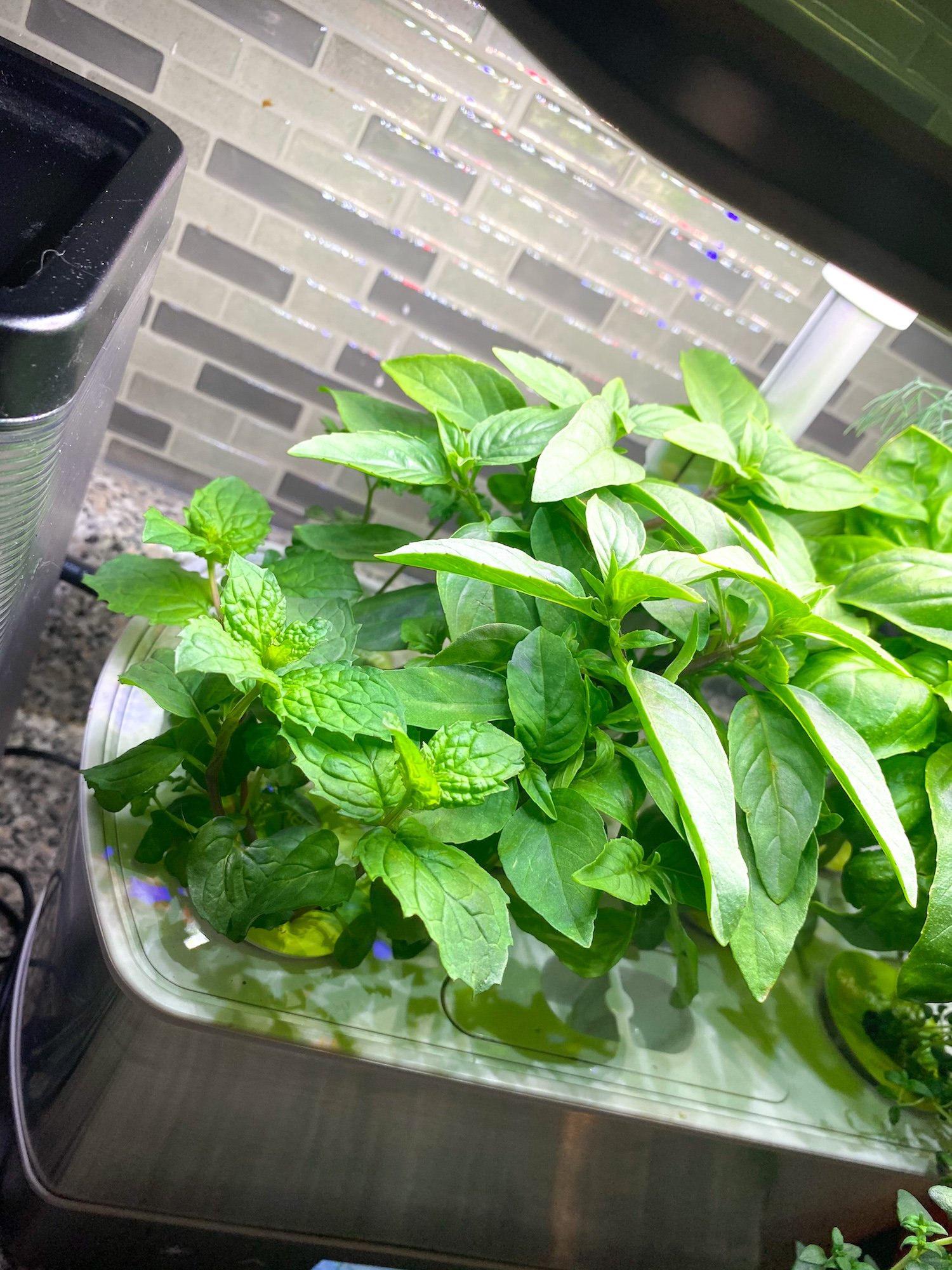 After five weeks (35 days), the Aerogarden was THRIVING. I look at the difference between week 4 and week 5 and I am SHOCKED by how much everything grew. All six plants are growing really well, though I have to watch out for the thai basil as it is shading out the parsley. I raised the LED light a few inches to make room for the plans which are now getting pretty tall! I’m looking forward to the plants all being the same growing height. Curly parsley, I’m rooting for you! (I actually use parsley the least so it’s fine but I don’t want it to die!)

I love my little herb garden! Growing fresh herbs has been really fun… and rewarding.

This post contains affiliate links. If you make a purchase, I may earn a small commission on sales.