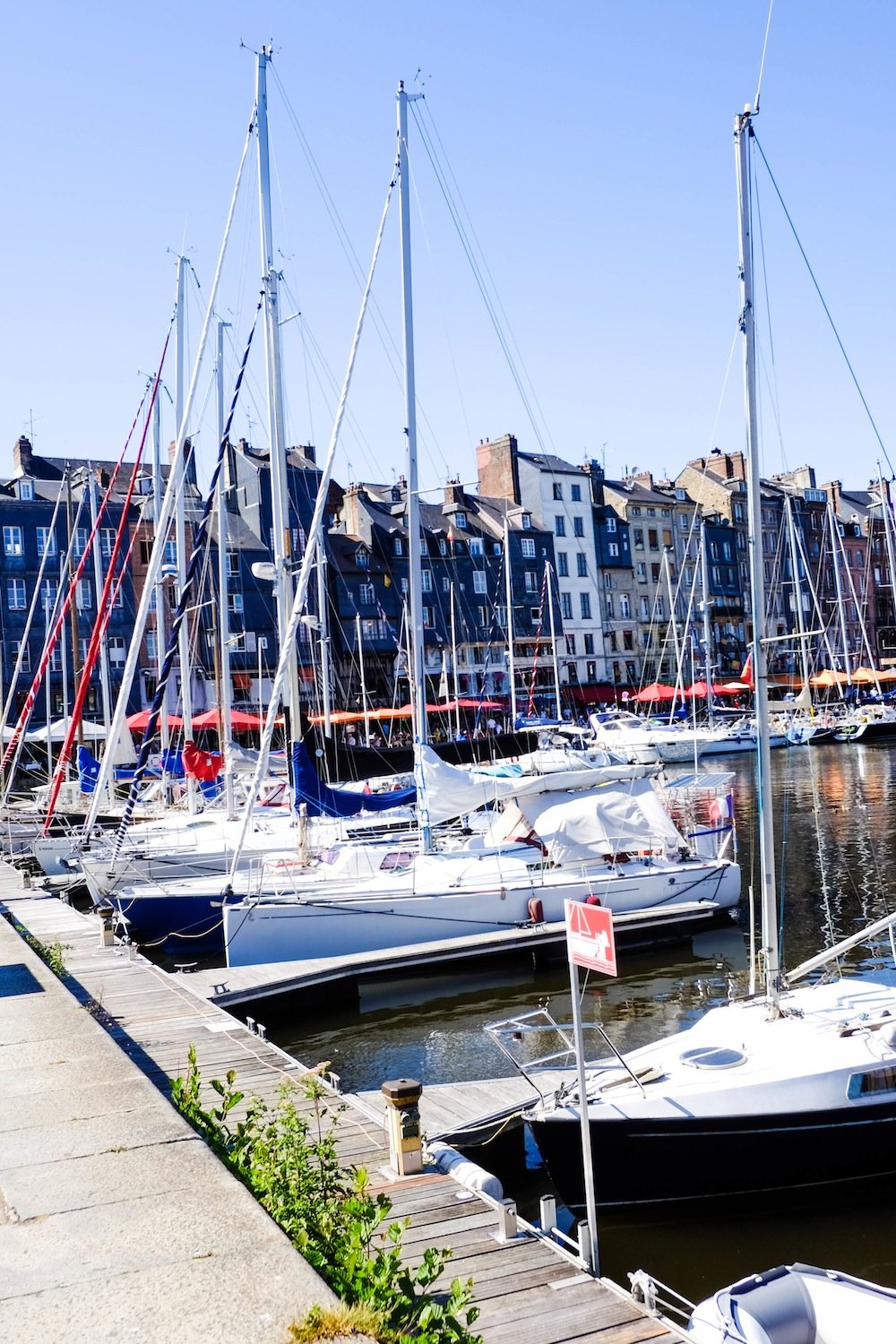 I think it’s taken me so long to finish this post because this trip felt just like a dream. Five days, eight villages… we saw SO much of France. I’ve been back for almost a month now and I’m only now posting this. I think I’m still savoring the memories a bit I guess (and in fairness, I took a LOT of photos and have a lot to tell you)!

Let’s back up. You may remember now that I went on a press trip with Saint James at the end of July. We spent a day at their factory and I already told you what I packed + wore. Today I’m going to share all of the details of what we did, where we went, what we ate, and all that stuff. 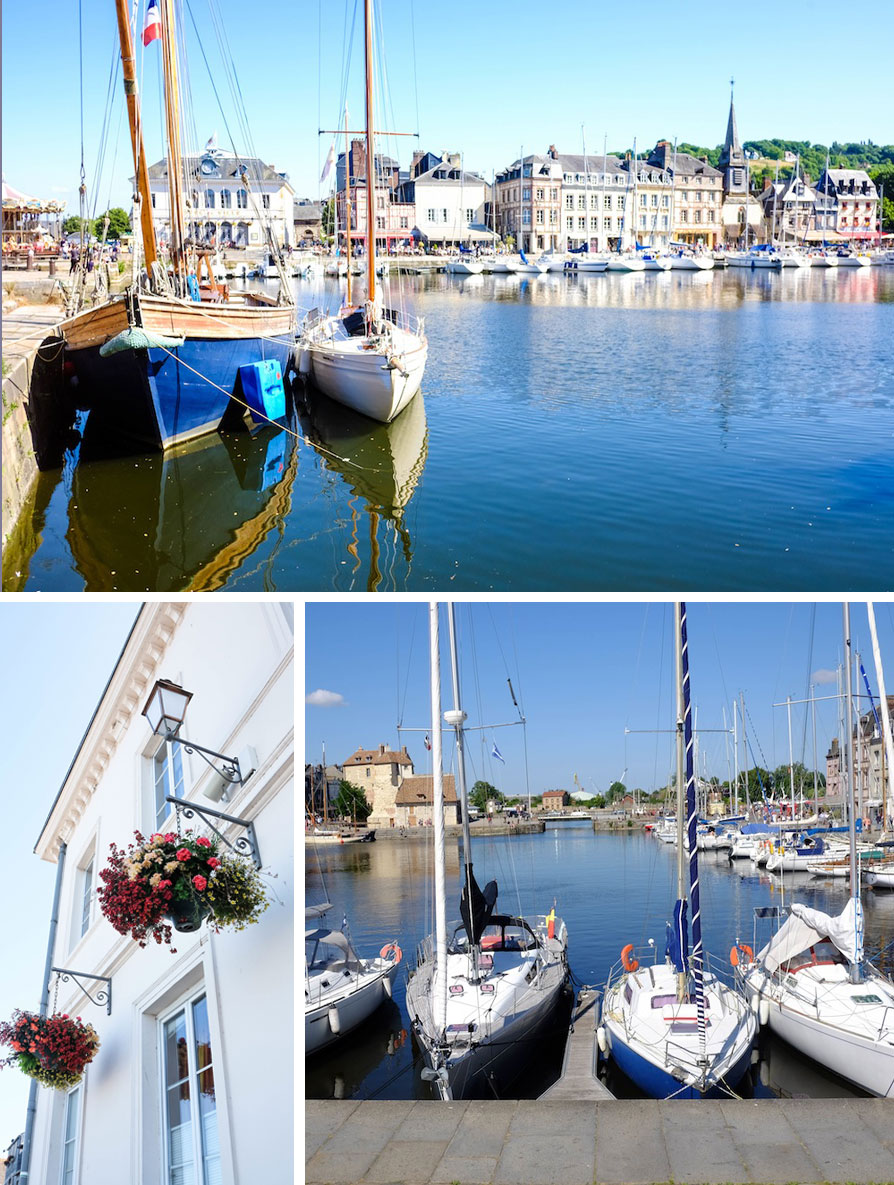 Our first stop was Honfleur. Honfleur is to Paris as the Hamptons are to Manhattan – it’s a charming coastal village where the Parisians go to escape (and get their seafood / rosé fix!) It’s a quiet little fishing town which is really what the heritage of Saint James is built upon. We stopped in, wandered about, before driving to Bayeux where we checked into our hotel for the night.

On our first night, we stayed at the Hotel Churchill. My room was small but cute and tidy. I don’t know if it was just the jet lag, but my bed was so comfortable that I slept like a baby. In the morning, the hotel has a delicious (complimentary breakfast). I had fresh scrambled eggs and they were amazing.

That evening, we dined at La Maison Blanche. I had the most delicious striped bass with vanilla butter. It was that evening that we were introduced to Cavados… a deadly apple brandy! The restaurants in Normandy are funny… the food is exquisite, but the decor at nearly everywhere we ate felt as though it hadn’t been updated since the eighties. 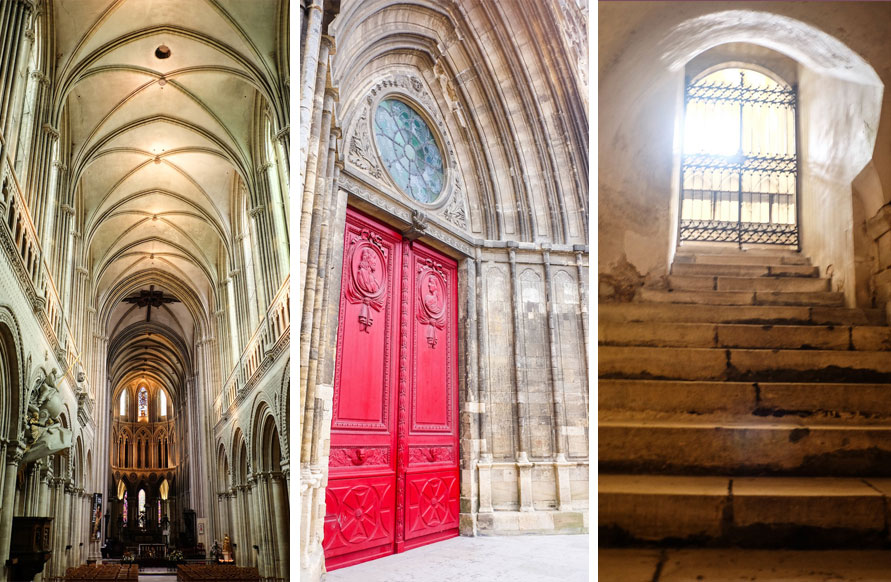 The next morning (after that yummy breakfast), we were off to the Notre Dame Cathedral in Bayeux. As an American (where all of the buildings are just so new in comparison), I am always blown away by European architecture, especially in the cathedrals and churches. This cathedral was built in 1075 and reconstructed in the 15th century. My favorite part was the crypt – it was beautifully eery and felt very Da Vinci Code!

After visiting the Cathedral, we then walked over to La Tapisserie de Bayeux (the Tapestry Museum). On display is just one tapestry – The Bayeux Tapestry, a seventy meter long depiction of the Norman Invasion. We rented headsets and walked the entire tapestry. No photos were allowed, but it was pretty cool to see (and pretty incredible that it’s still in such great shape 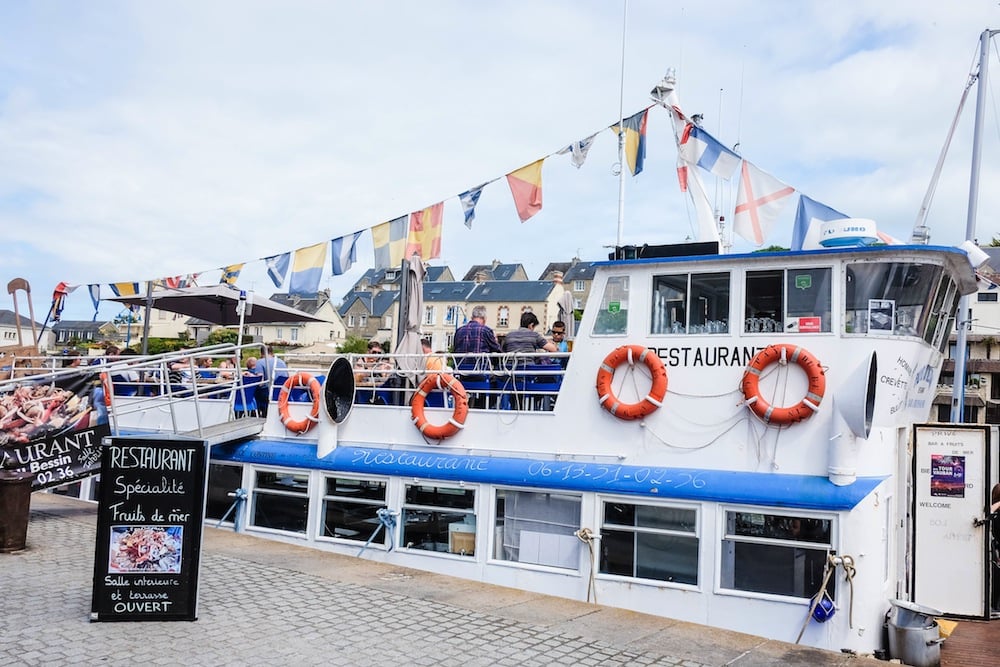 Lunch afterward was a real highlight. We were on a boat! The little boat is called Pays du Bessin and as I was told, is a quintessential Normandy experience. We ate the entire ocean… I was a happy girl. Lobster, spider crab, oysters, clams, shrimp.. all of the things. If you are ever in the area, this is an absolute MUST – so, so amazing and delicious. 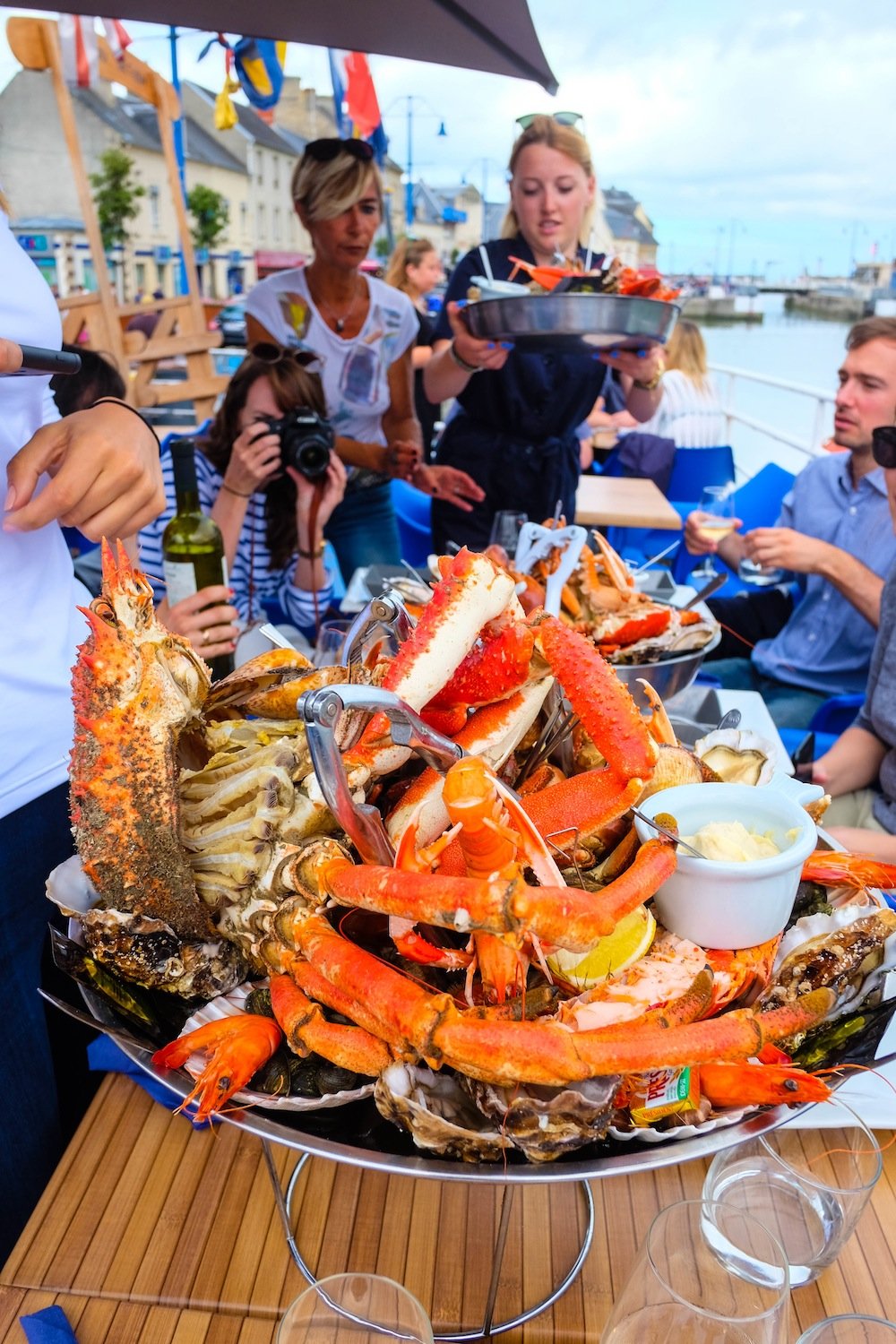 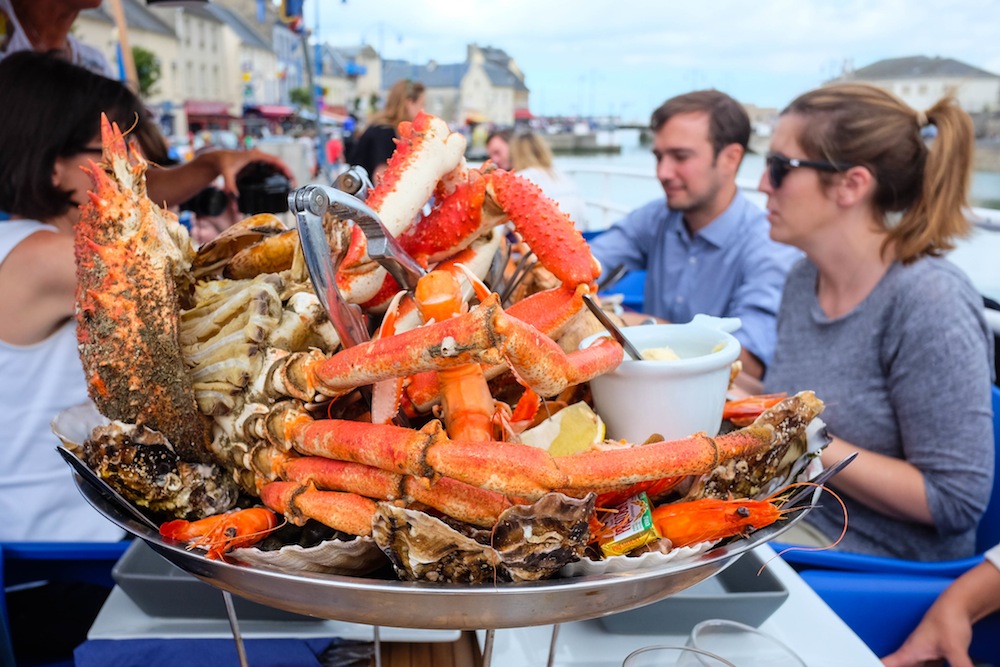 After lunch, we visited the American Cemetary and Memorial at Omaha Beach. This was really beautiful and moving. 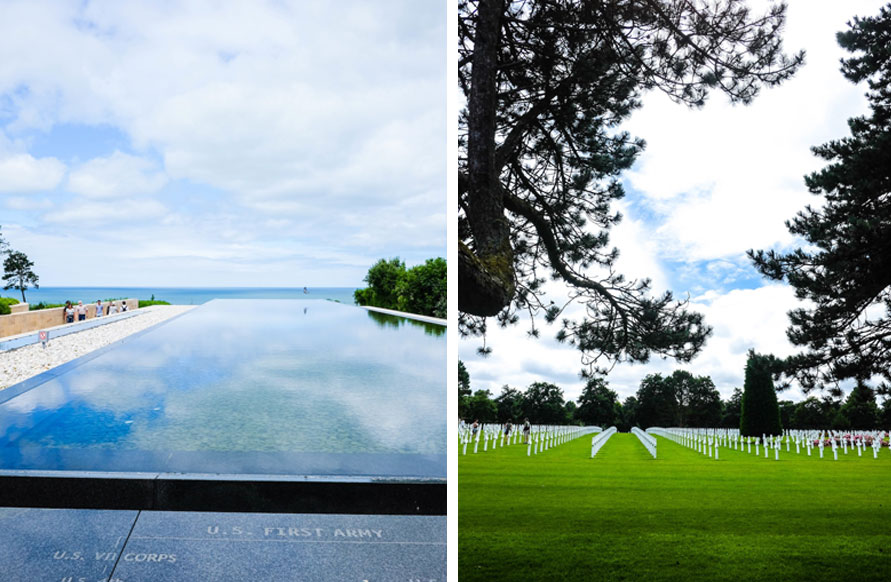 From there, we drove to Mont Saint-Michel where we checked into our hotel for the next two nights: Le Relais du Roy. Dinner that evening was at Le Pre Sale, which was amazing. At dinner we learned that one of the specialties in MSM is the lamb. As the lamb is raised on the salt marsh, it’s a bit saltier in flavor than your typical lamb. It was absolutely delicious… some of the best lamb I’ve ever tasted. 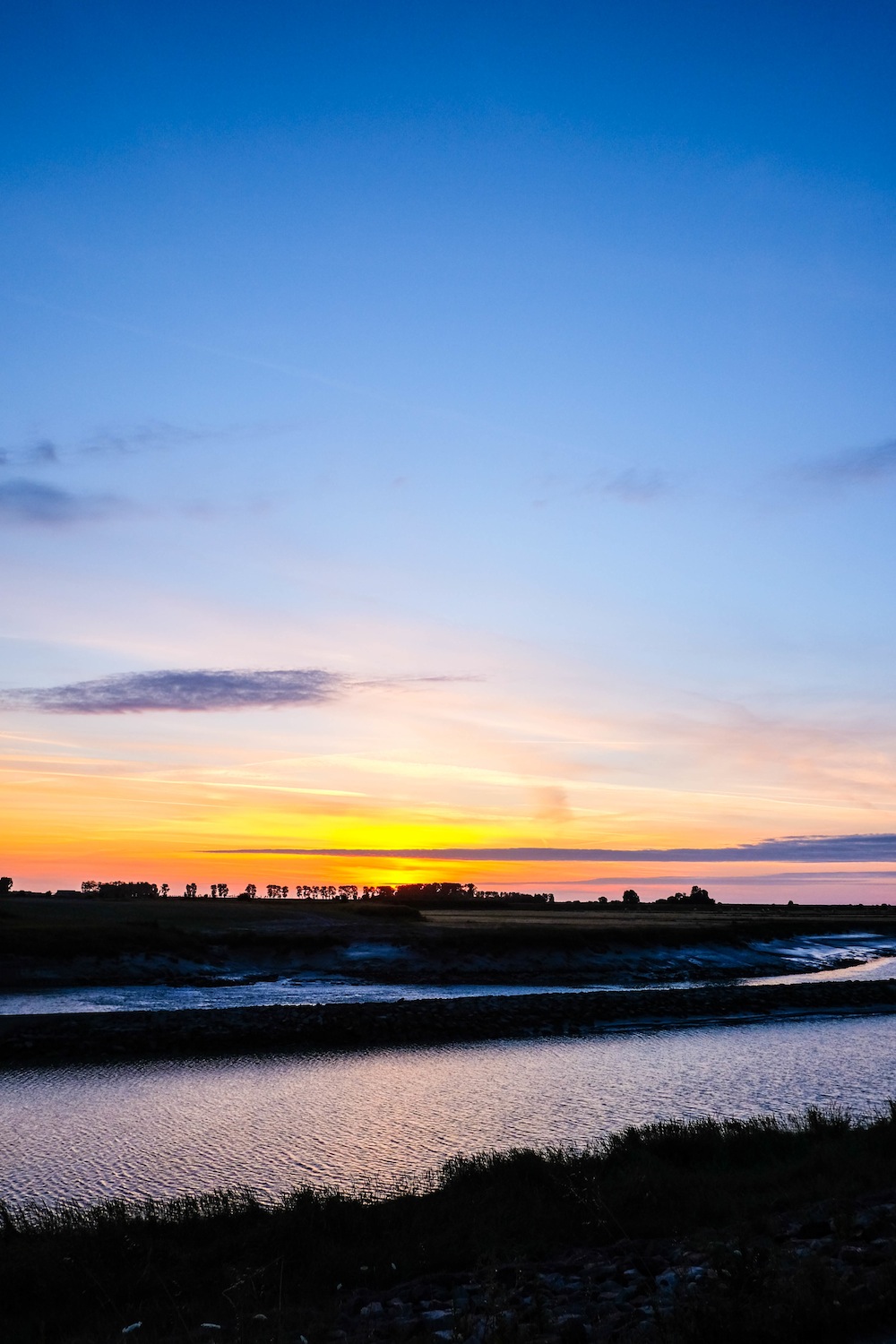 The next morning, we woke and toured Mont Saint Michel! More architectural overload. It’s such an incredibly amazing place. I will nerd out for a minute to tell you that I definitely got a bit of a Harry Potter vibe. The little village before you get to the cathedral reminded me a lot of Diagon Alley. MSM has just seventeen inhabitants total… including seven nuns and four monks.

Mont Saint-Michel is truly such a special place. It was a favorite place of Claude Monet and just totally beautiful. If you are ever able to go, I can’t recommend it enough. 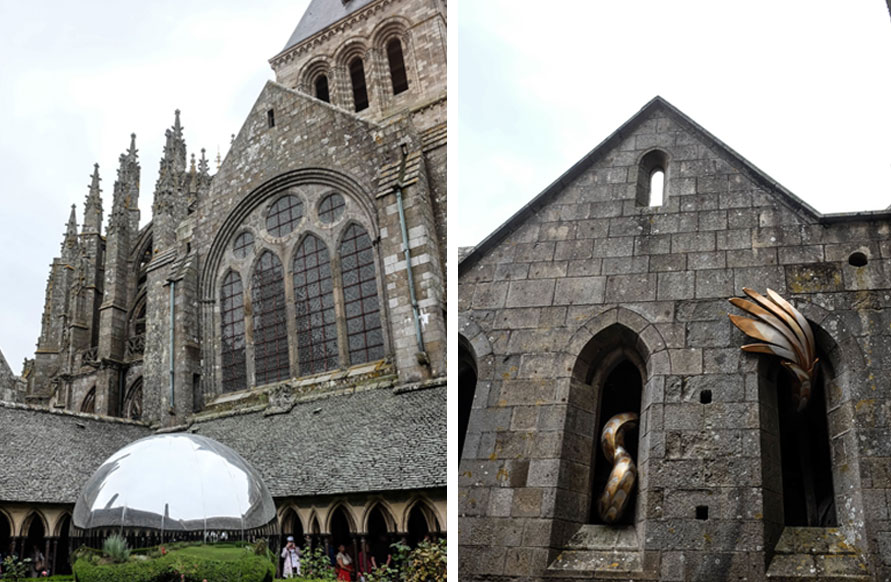 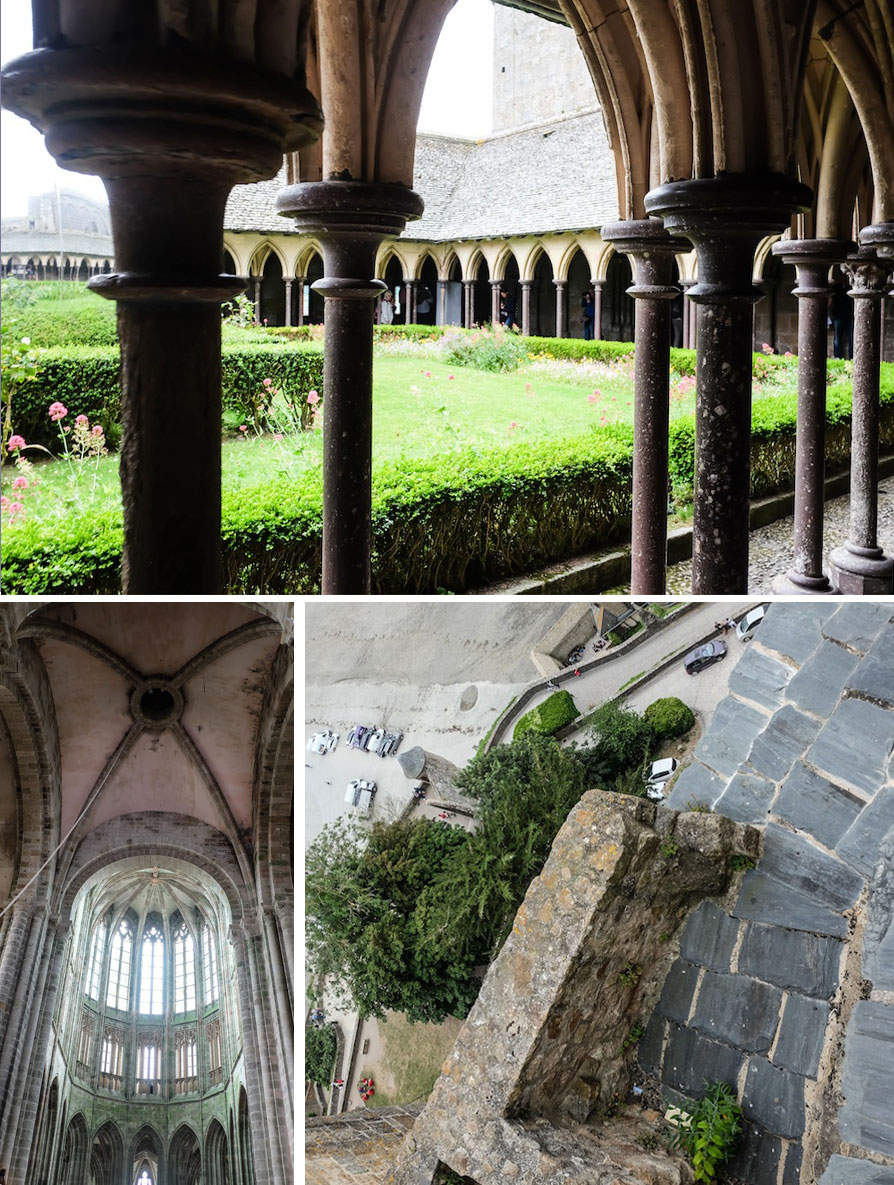 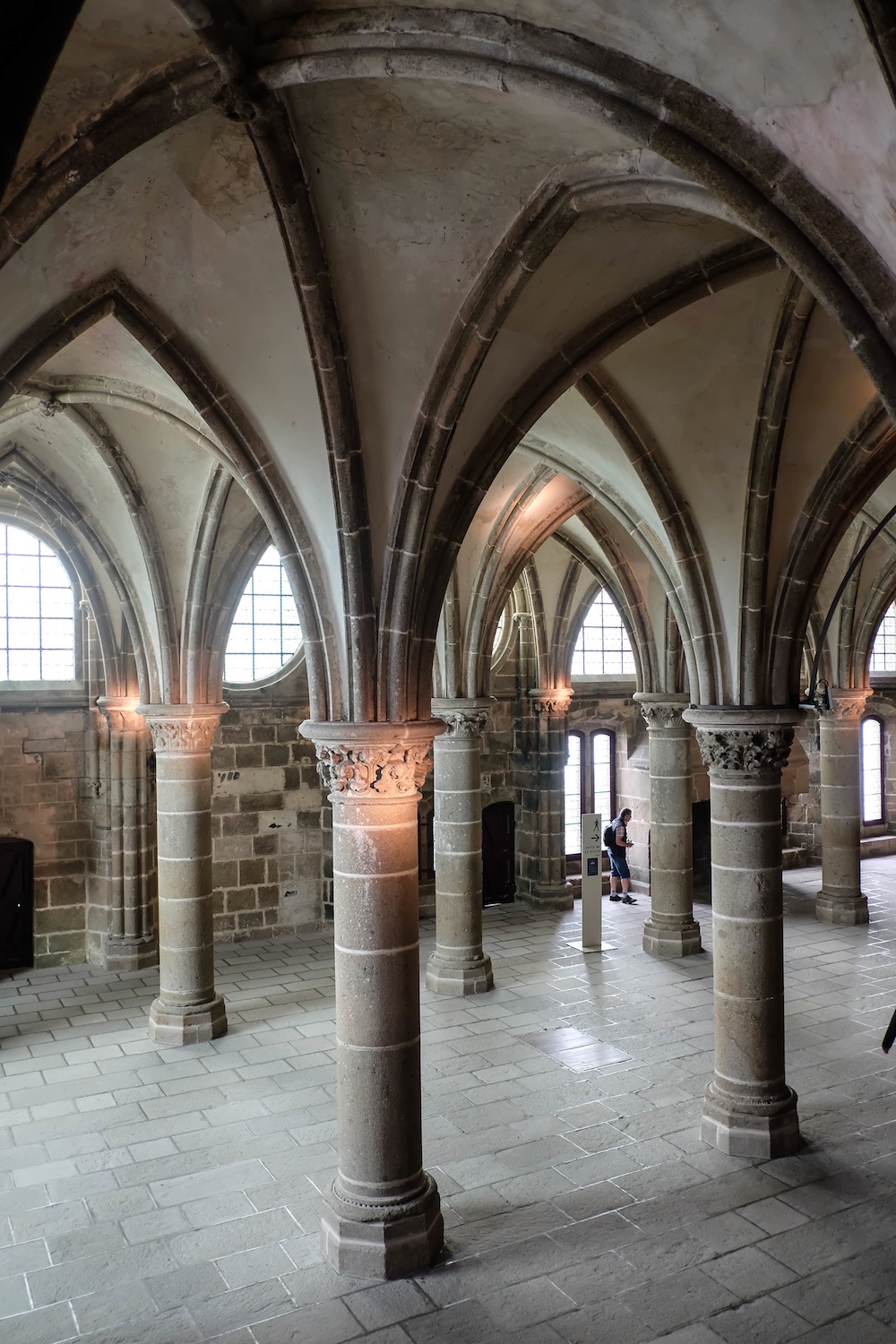 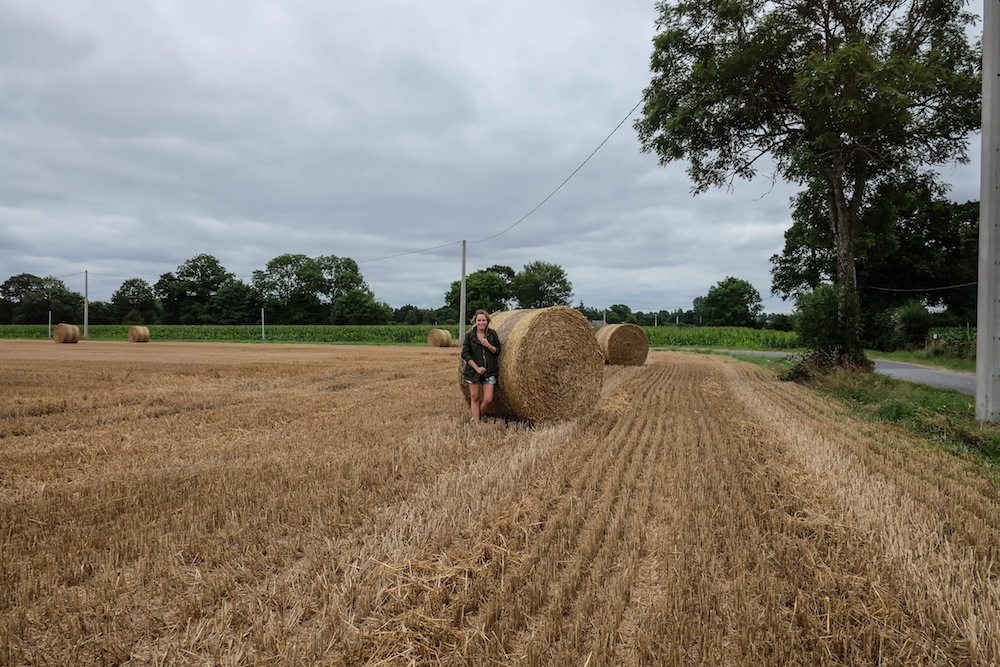 And then we stopped to take a pic with a hay bale. Very important journalism, people. 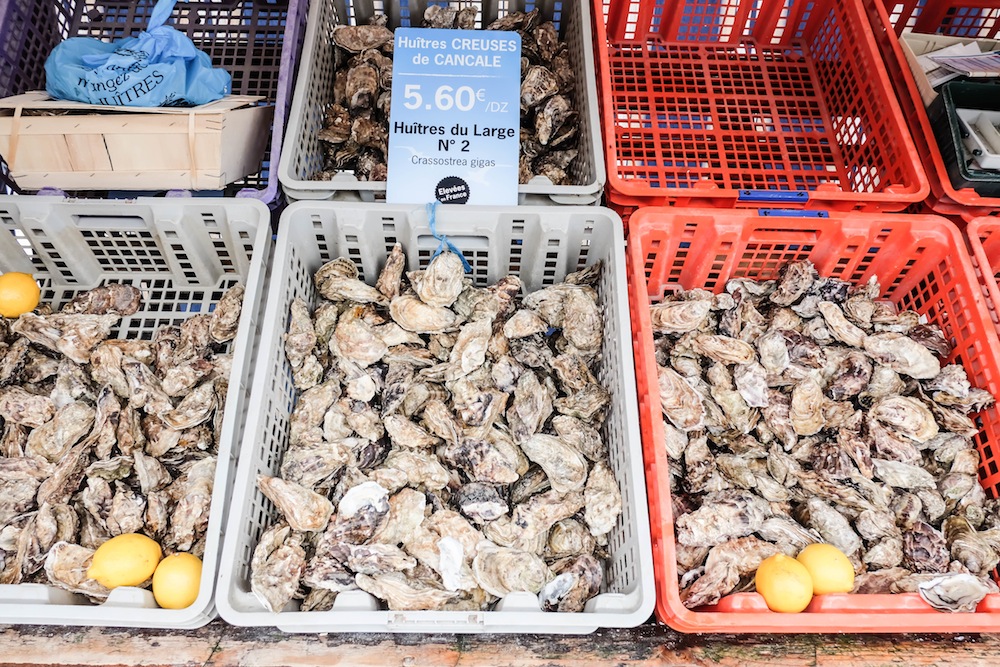 After touring Mont Saint-Michel, we had worked up quite an appetite. And so it was onward… driving to the village of Cancale. Cancale ended up being an unexpected highlight for me. We pulled up to park and the little street was lined with fisherman selling fresh oysters. In case you weren’t aware, I am an oyster fiend. Our lunch was at Breizh Café (they have this in Paris as well) and was one of my favorite meals of the trip. Lots of fresh, local oysters… and the most heavenly crepe with ham, camembert cheese, and greens. 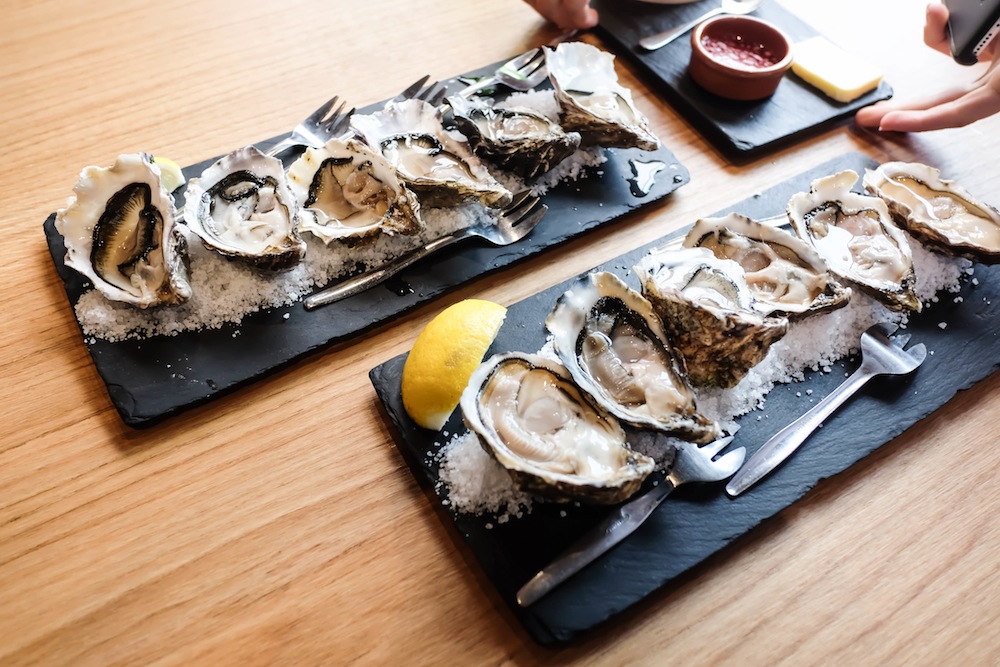 After Cancale, we headed to the walled city of Saint-Malo. We had a bit of a history lesson (we toured the house of a privateer), and then had even more oysters at dinner. 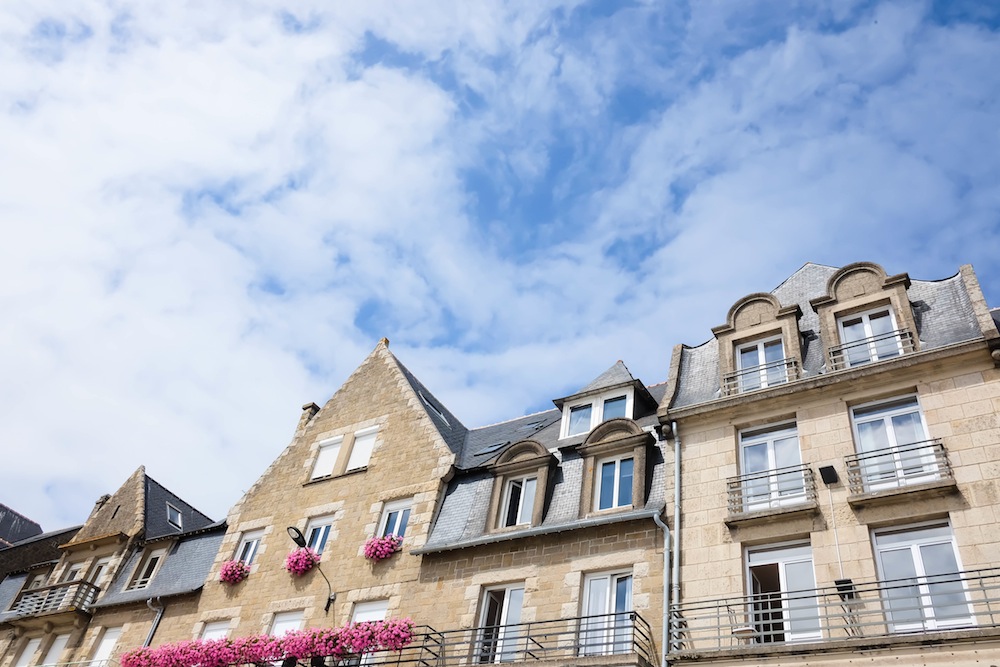 After a long day (and seeing three amazing villages!) it was back into the car where we headed to Rennes. I checked into my room, fell fast asleep, and was up at 5am for our train back to Paris and our subsequent flight home. What a whirlwind!

Thank you to Saint James for an unforgettable experience!