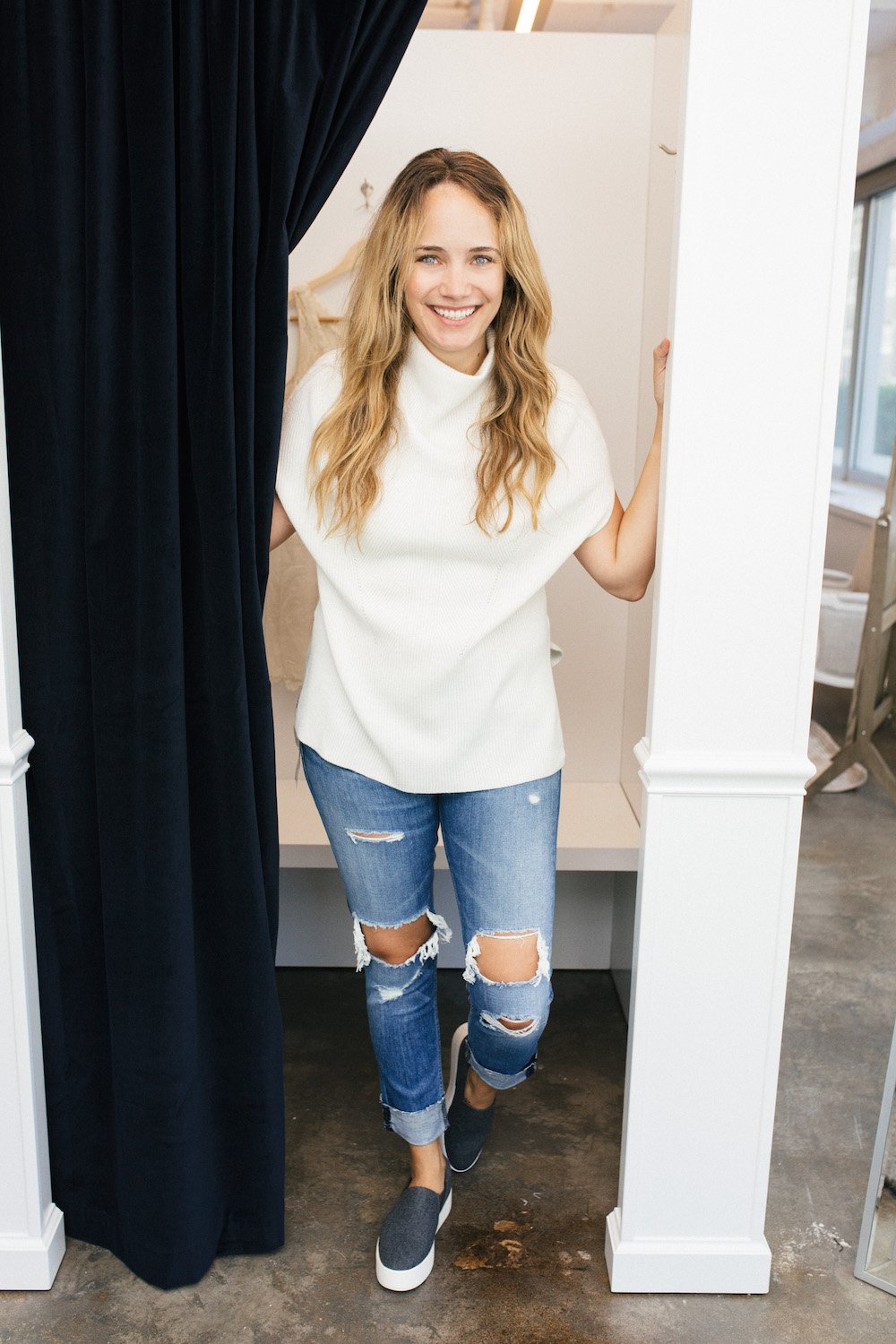 I was so excited when Trunk Club approached me about a partnership. I had already read about them on my friend Liz’s blog here, and oddly a guy I went out with a few months ago had raved and raved about their services, to the point where I thought about just signing up all on my own.

I generally know what I like and what looks good on my body but at the same time I have been feeling as though I was in a bit of a style rut (this always happens to me toward the end of the summer). I wanted to add a few new basics to my closet that would a) feel fresh, b) were not dresses and could easily mix + match with things I already own, c) would be flattering on my body and d) were a little bit less feminine + girly than the pieces I usually choose for myself.

The process is so easy (geared to people who don’t have a lot of time but still want to look great) and to be totally honest, if I were not a blogger where it’s an actual part of my job to be on top of what is in all of the stores, all of the time, I would not shop anywhere else. 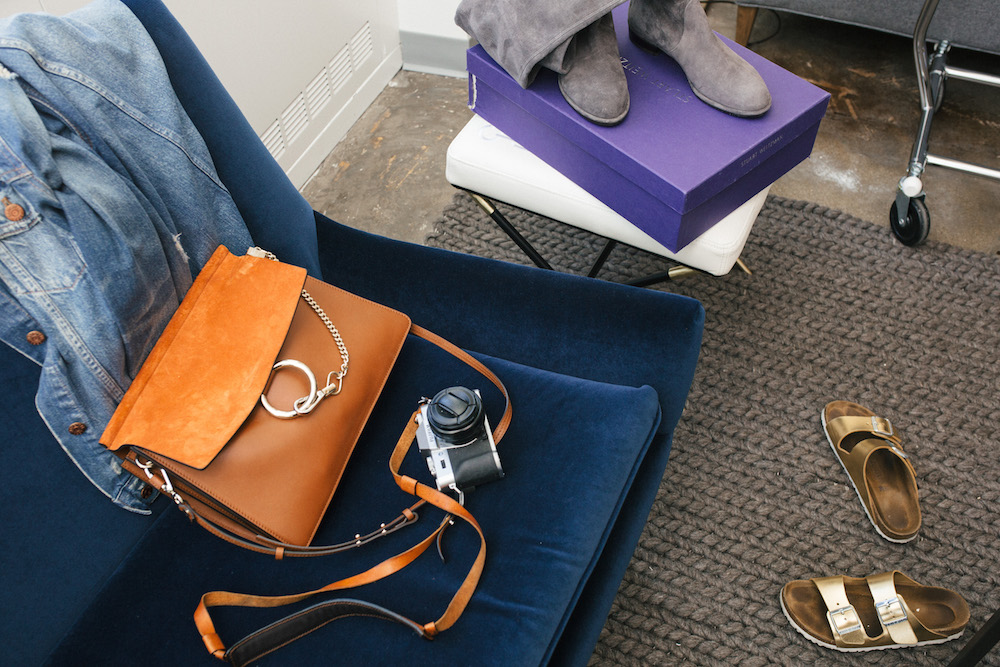 After signing up online + filling out a style profile (I provided them with all of my sizes, favorite designers), I was paired up with Kelsey (below!) She was an absolute dream to work with and we have very similar style (I’m obsessed with the jumpsuit she’s wearing below – sadly, TC does not carry it though!). We chatted for about fifteen minutes on the phone, where I filled her in on what I was looking for, my personal style objectives, body hangups, and so on and so forth. She was so helpful and nice and it was really great to be able to talk to a real person.

After our call, a preview of my trunk arrived! I was able to pick and choose and veto certain things (for example, I said no to a pair of cropped flare jeans which just aren’t my style –  try as I might, I still don’t understand that trend!!!!) 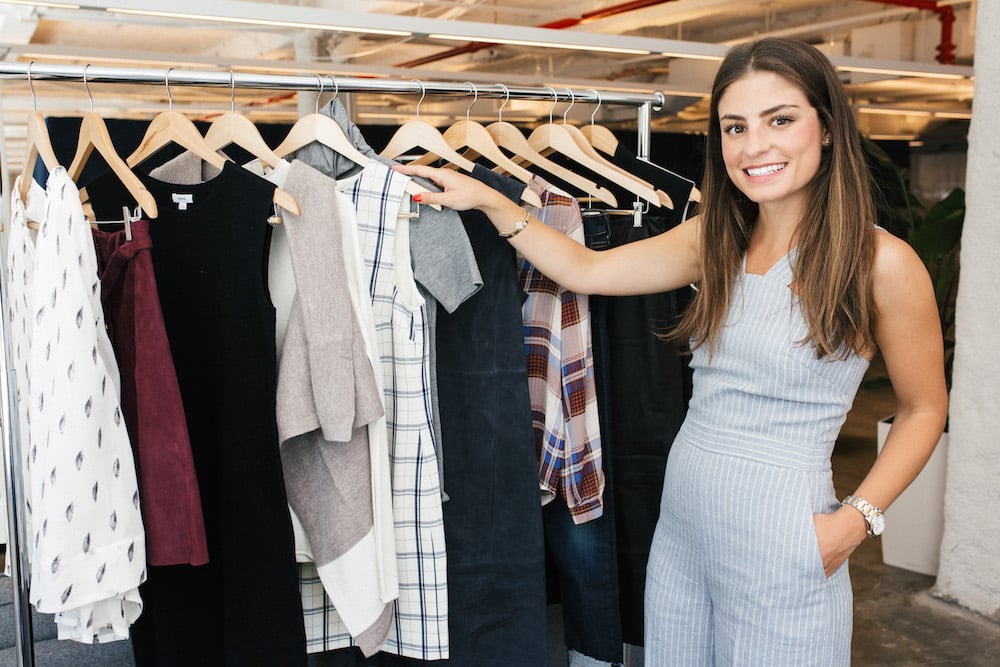 A week or so later, I ventured into the actual Trunk Club clubhouse in midtown for our styling session… and this is why I say that if I weren’t a blogger, I wouldn’t shop anywhere else. It was so nice. I had my own private little lounge (with all of Kelsey’s selections neatly hung up and ready to try on). She had pre-assembled some outfit ideas ahead of time, and offered me a cappuccino. (It was early in the day, but they also have a bar so you can have rosé or even champagne if you’d like… it would be so fun to go with a group of girlfriends!).

The space was brightly lit and quiet – a relaxing shopping experience, which I actually didn’t think was possible (I generally shop online which is annoying as I end up returning so much, but preferable to loud, crowded stores with pushy sales associates). We tried on a LOT. I immediately gravitated to (and put on) these Vince platform sneakers as they were so cute + comfortable.

It was fun, because Kelsey pushed me out of my comfort zone a bit. While I had vetoed the cropped jeans, she did suggest a pair of cropped Theory trousers that I ended up really loving. I also tried on a really cool pair of Theory leather culottes. I liked those a lot but deciding against them as they were pretty expensive for such a trendy item. 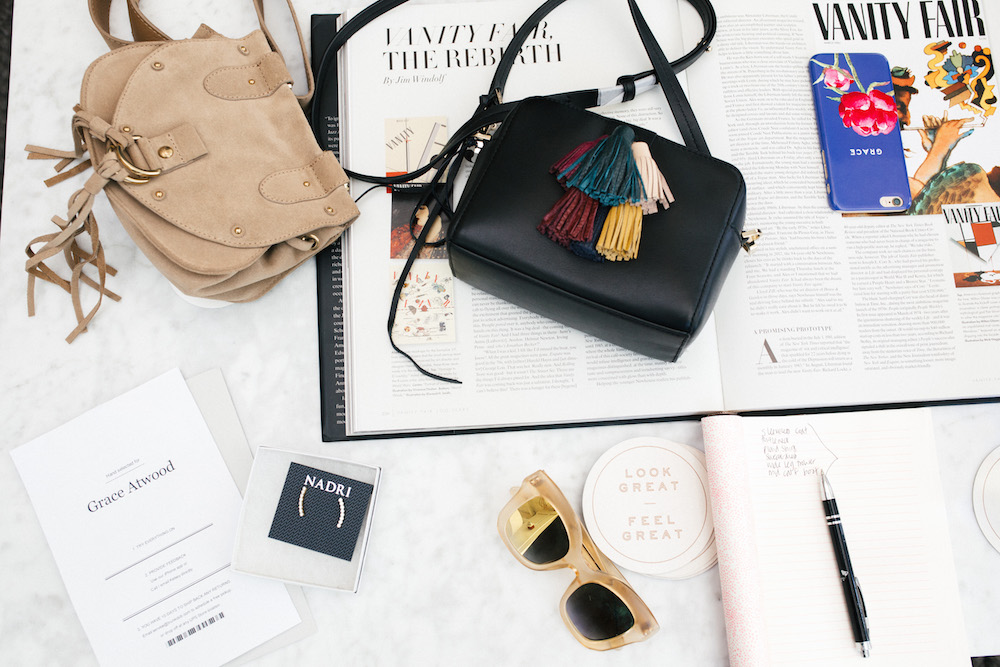 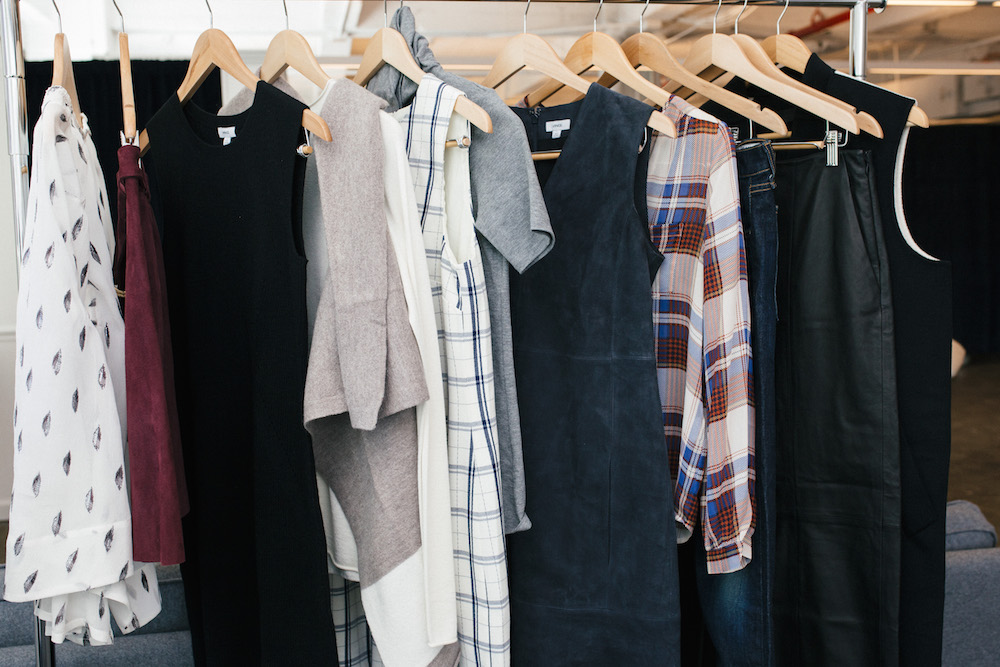 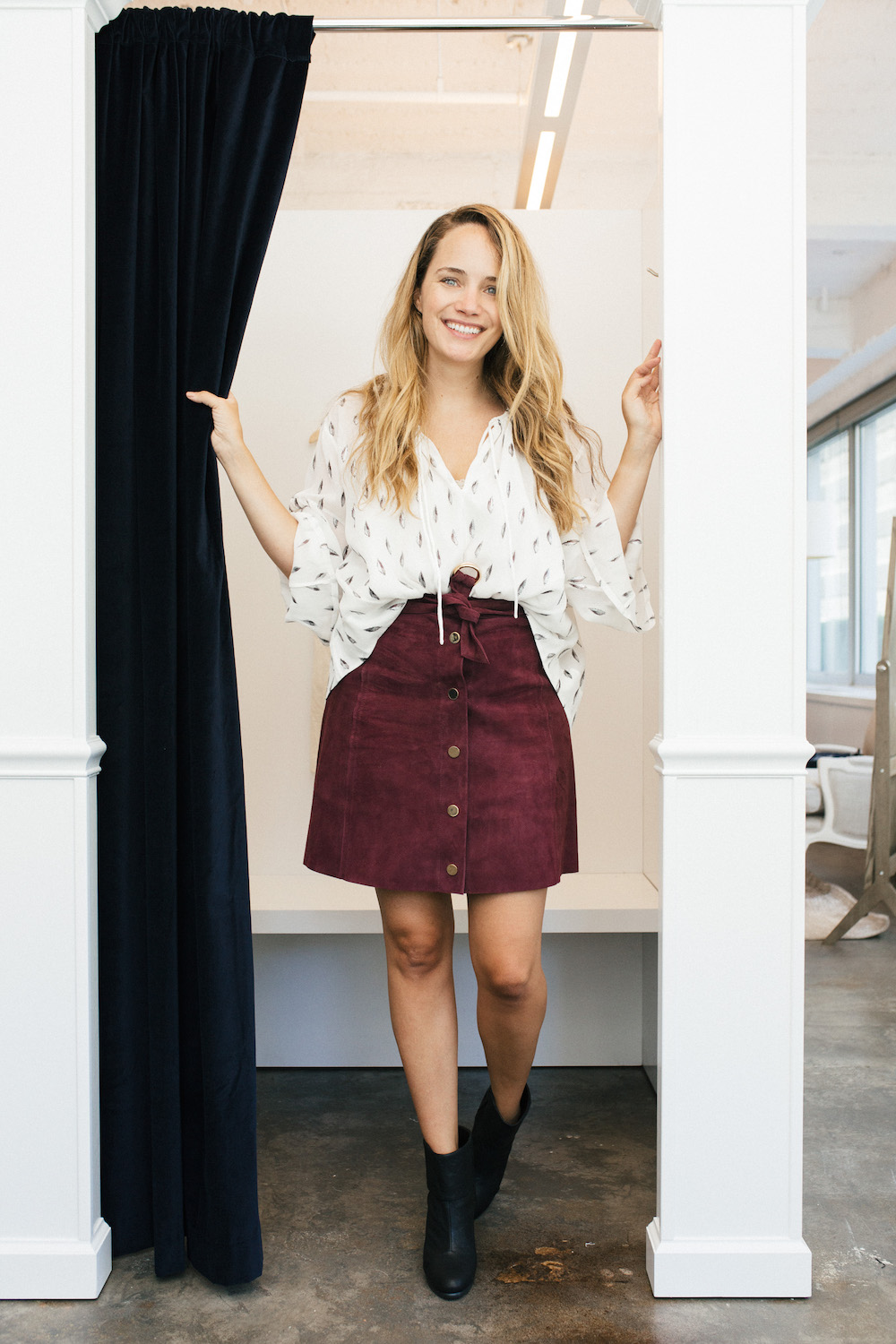 I loved this outfit… an IRO top, tucked into a Kate Spade skirt. Kelsey encouraged me to try tucking my more billowy tops into something high-waisted. I ended up buying the IRO top and deciding to look for a less expensive version of this skirt in denim or twill. I already have these exact Rag & Bone boots so we are good to go there! 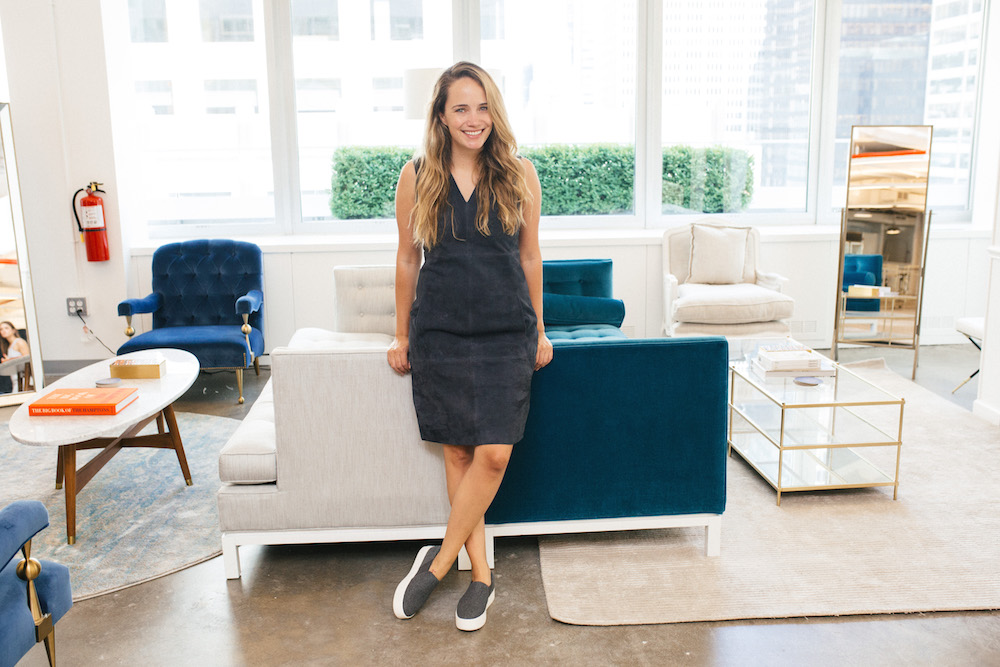 This Vince dress is a dream. It fit me perfectly, as if it were made for my body. I was tempted to buy it for fashion week but decided to hope and pray and cross my fingers that it goes on sale at some point. 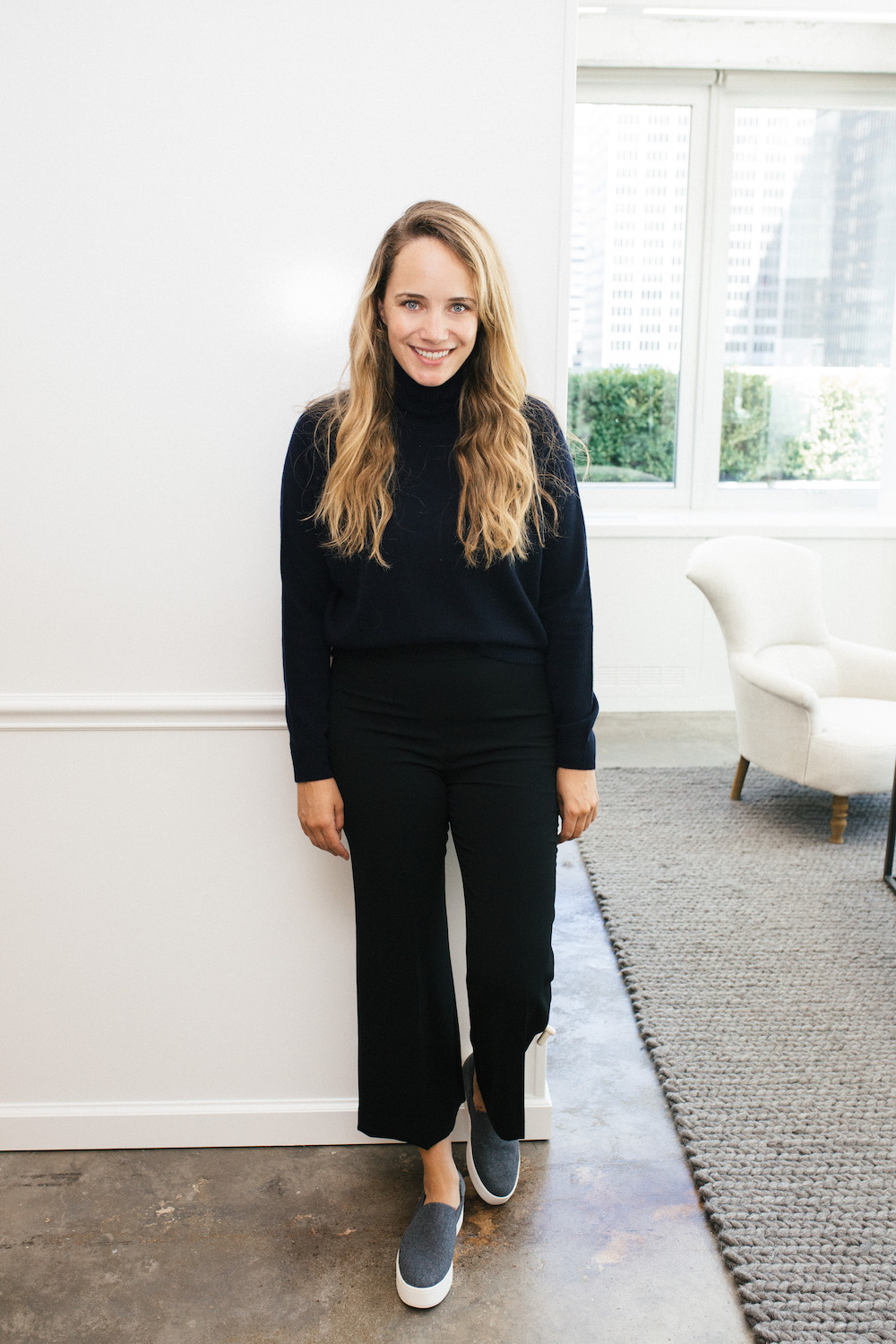 These were the cropped flare pants that I was telling you about. I initially was not so sure about them (high-waisted AND cropped? I was so out of my element), but I came around… especially after seeing your reactions on Snapchat – everybody loved them! I love how they pair with the cropped turtleneck in this outfit. I also tried them on with the IRO blouse above and loved how they looked with it.

I did not end up buying the pants initially but ended up calling Kelsey to order them… they were one of those pieces I had to let marinate a bit before committing to them. 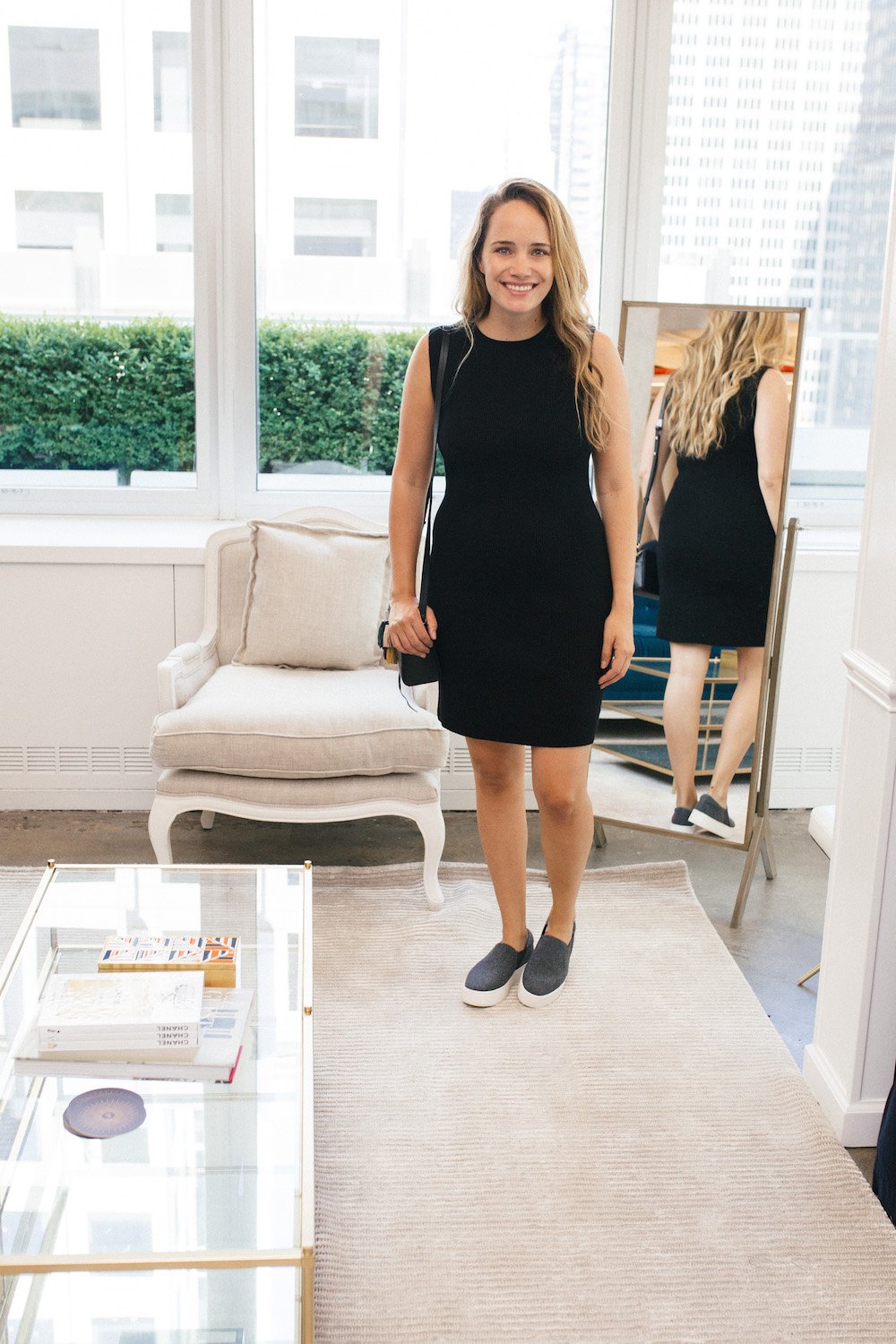 This sweater dress (from Vince) didn’t make the cut. I liked it, but didn’t love it.

All in all, this was a truly awesome way to shop. A few more things that you might want to know:

I really just can’t say enough great things about the service. Kelsey was such a dream (you can reach out to her here to set up your own session) and this is the best way to shop for new Fall clothing and accessories. 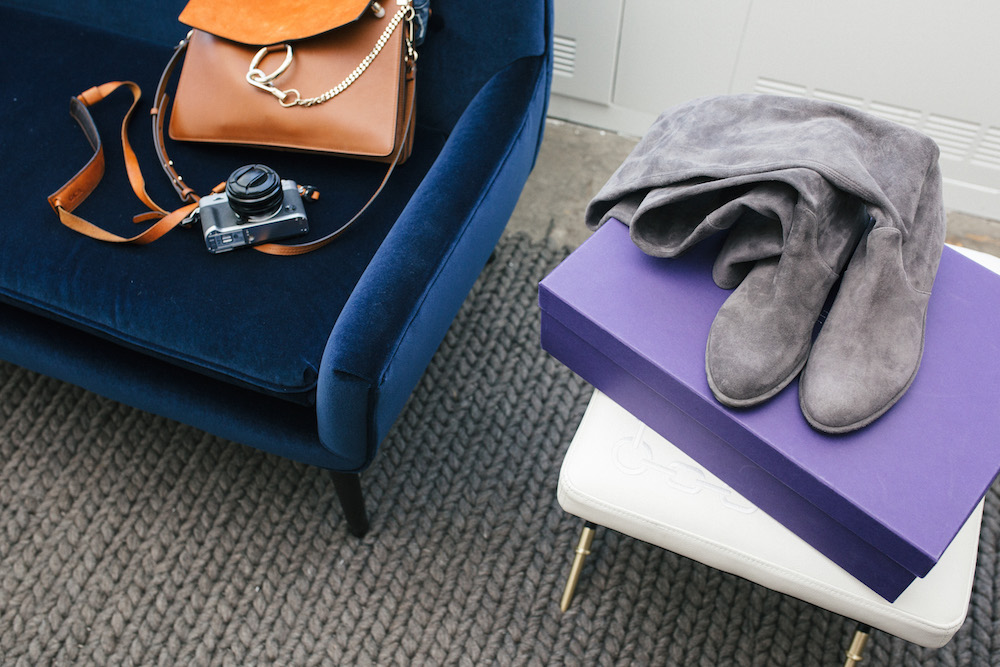 In Partnership with Trunk Club.