Happy Monday. I loved our little check-in last week, and was hoping that we could do it again! (Tell me where you live, how you are feeling about things, and one small thing that’s bringing you joy!)

I will go first. Life in Brooklyn is more of the same. It’s been pretty isolating but I’m hanging in there. Work has been surprisingly busy(er) which is a relief, and what’s bringing me joy right now is this cats video from SNL – Kate McKinnon is maybe my favorite person ever? I have to say that I am so impressed by the quarantine content SNL has been putting out. It is quite possibly even better than regular SNL? Unclear.

But anyway, tell me how you’re doing. It’s weird, but a few of you said this in the comments last week and I agreed… it made me feel less alone, hearing everyone else’s experiences!

Oh, also! I got a great tip from a reader. I think it was in a blog comment, maybe a DM. But I was whining about all the housework (the dishes just seem to really be adding up) she suggested creating the ritual of “putting my kitchen to bed” everynight. Doing the dishes (even if you really don’t want to!), cleaning out the sink and wiping down the counters, etc. I have done this the past few nights and it definitely makes waking up (and making coffee) much nicer the next day.

Alright alright, let’s get into this week’s distractions!

Well first of all, I am still very much loving The Baker and The Beauty! It’s SUCH a cute show. I haven’t watched the (Israeli) original but the first 2 episodes of the US version have been absolutely adorable so far.

I’ve also fallen very much into Outer Banks. The question and consensus amongst all my girlfriends has been… “WHY ARE THESE TEENS SO HOT!?!?” It makes me feel a little less like a creep knowing that John B. is 27 years old and not 16, but still. Wow. The actual hottest cast ever and I feel like a creep. The show has been described as if Dawson’s Creek and Goonies had a baby, and I’d have to agree. A beautiful foursome of teens, class dynamics between the rich kids and the working class kids, and… a treasure hunt. It’s very fun.

I also watched Run on HBO. There are only two episodes so far and I’m struggling with it to be honest, mostly because (I’m sorry this is terrible), I find both of the characters to be deeply unattractive. Lolz. The premise of this one is that two college sweethearts have a pact where they text each other RUN and both abandon their lives. I’m not sure where it’s going so far but I’m going to keep watching! What are you watching? Got any good recs for me?

One of the best presents I’ve received in a while was a paint by number kit! I was really struggling at the beginning of quarantine and one of my best friends had a photo of Tyrion and I blown up and made into a paint by number kit to cheer me up. It was the most thoughtful gift and also so fun – I can’t wait to get creative!

I will tell you that I haven’t done it yet but am SO excited to get started on it this week. I will be sure to share to stories as I start painting! The site (Mii Creative) is very cool – you can upload any photo and they’ll make it into a paint by number kit… sending you (or your recipient) a canvas, brushes, and all the paints you need. SO smart (and shockingly affordable. I was worried he’d spent a lot of money and the whole kit is under $40.) It’s such a cool idea. 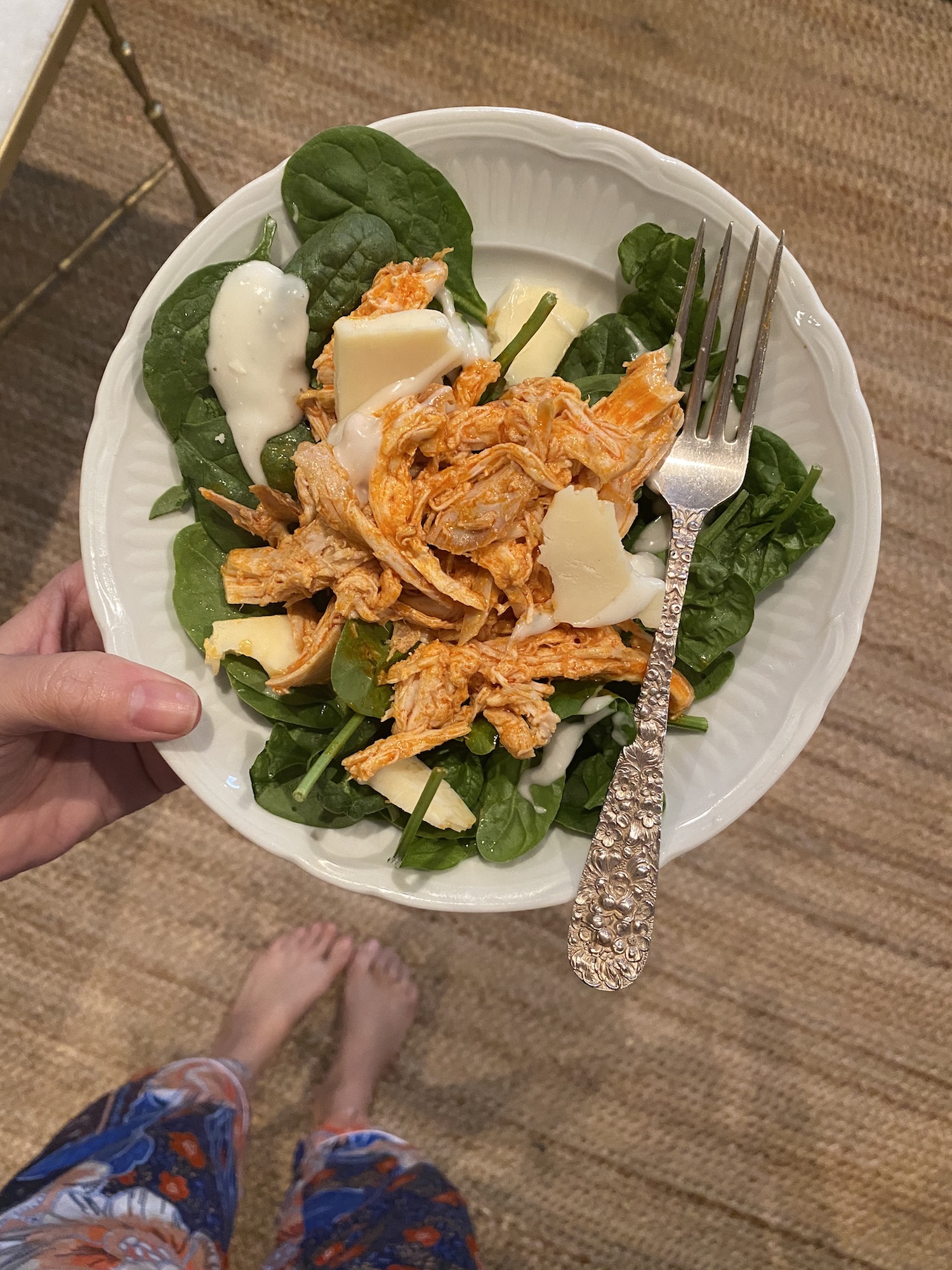 It’s no secret that I’ve been cooking a lot. Aren’t we all?! Every week I try to learn how to make at least two new things. This week, I made Julia’s buffalo chicken. It’s heavenly. I mean I live for buffalo chicken ANYTHING and cannot wait to make real chicken tenders once my air fryer arrives) but I love this. Most days I have it for lunch over a bed of spinach (with cheese + blue cheese dressing). But for something more indulgent it’s great over pizza or even just an english muffin with a little cheese!

Recipe number two was last night I made this summer squash and zucchini pasta. It was delicious and I’m looking forward to having the leftovers (the recipe makes a LOT) 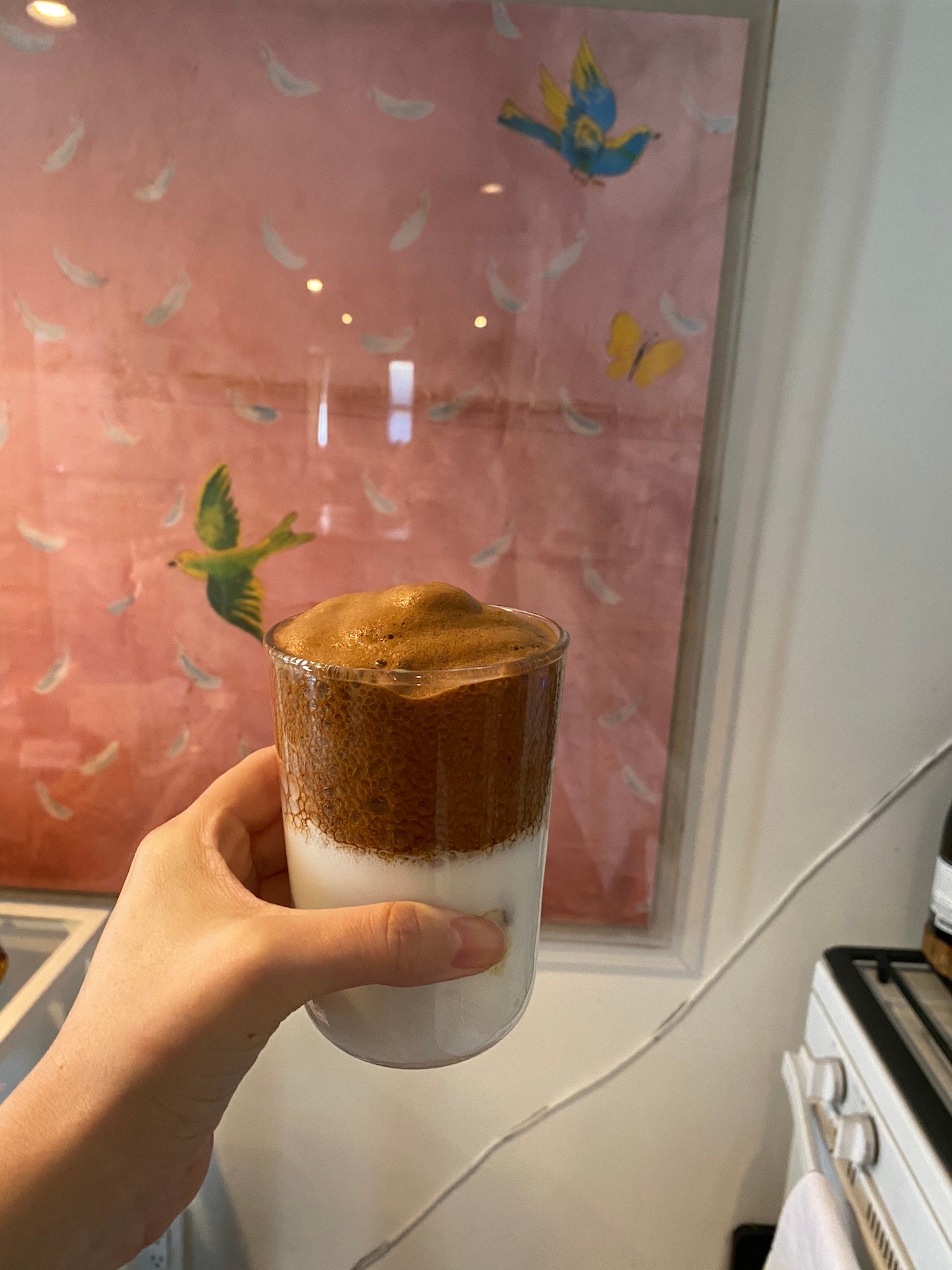 Whipped coffee (or Dalgona coffee) has been all over social media to the point where I bought some instant coffee (usually a sacrilege!) to try my hand at it. I started with this recipe (if you can even call it a recipe) and tweaked it a little bit to make it less sweet! I use two tablespoons instant coffee (this instant coffee is actually pretty good), a tablespoon of coconut sugar, and two tablespoons of hot water. Then I put it all in a medium sized mixing bowl and beat it with a hand mixer until it’s super fluffy! Then, I fill a glass halfway with a couple ice cubes and coconut milk and top it all off with the coffee mixture.

That’s this week’s list! I hope there’s something on here that brings you a little joy/inspiration. In the meantime, tell me how you are doing (and TV recs!) in the comments!!