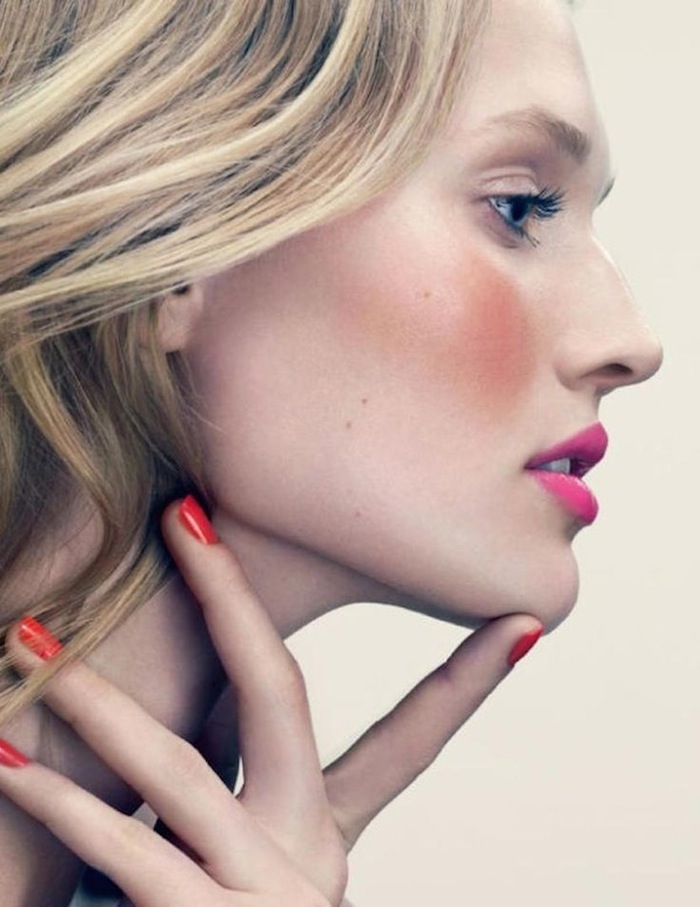 Summer beauty is my absolute favorite. I’m not really a makeup girl (save for a bold lash and a bright lip) but this time of year my skin has a little natural glow going on, my hair is a little bit lighter, and the warm weather has me feeling happier. And let’s be honest, the real key to outer beauty is inner happiness. I’ve tested out a ton of new products this month (you should see my bathroom…) and today I thought it would be fun to share a few tips + tricks for a prettier summer. Some of them are time saving, some of them are life saving (sunscreen!), and all of them will have you feeling just a tiny bit prettier. Enjoy!

1) Find a great sunscreen. I have been guilty of not wearing sunscreen every day, and stopped that this winter after my facialist told me that my skin is getting thinner in some parts, which is causing the splotchiness (hiiii, broken capillaries) on my cheeks. Great. Now, it’s sunscreen every single day. Religiously. For every day use, I love this one from Skinceuticals. It provides great coverage and doesn’t get greasy. (At the beach, my mom has gotten me hooked on this spray from Koola. It’s all natural and so easy to apply. And unlike most other spray on sunscreens, it isn’t the least bit sticky.)

2) Get a keratin treatment. A couple weeks ago, I tried out SuperSilk’s new express treatment. It will run you $50-100 depending on where you live (you can check out salons here) and it lasts two to three weeks. I was amazed at how it took the frizz right out of my hair. With the crazy summer humidity, this made such a difference for me. It didn’t take much longer than getting a traditional blow-out and left my hair frizz-free as promised. (When I air dried it, the wave was the same… just less puffy as there was less frizz). They also have a regular treatment that lasts three to four months; but I have not tried that one yet.

3) Try an in-shower self-tanner! St. Tropez has one and I was shocked to see that it works really, really well. It’s a little bit annoying to stand there in the shower with the water off for three minutes (I scrubbed the walls of my shower while I was waiting), but the glowy skin that develops a few hours later is 100% worth it. It keeps selling out at Ulta, but Sephora has it in stock right now!

4) Try a coral lipstick – it looks good on everyone. My personal favorite is this one. The color is “Live it Up,” which is also just good summer advice.

5) Try out a dry oil spray. What makes a dry oil different from regular body oil is that it’s lighter than traditional oils and absorbs into the skin or hair very quickly. It’s usually extracted from olives or botanicals, and leaves behind a satin/non-greasy finish. For my hair, I love this one from Herbal Essences as the smell is insane, and for body I love Ahava’s Dry Oil Mist.

6) For the smoothest legs ever, try out this combination: L’Occitane Shower Oil + the new Venus Swirl razor. (Sidenote – this razor is really good. I’m always skeptical as to why they launch a new razor every few years, but this one is a huge improvement as it provides such a close shave + actually gets the hair on my knees. I really, really like it.)

7) Nix mascara. That sounds dramatic, and I haven’t fully given up on mascara just yet but I have the best lash routine ever right now.  I’m going to write more about this next week, but I use Neulash morning and night (after two months of religious use, my lashes have gotten really long) as well as Mister Lash (thanks to Molly for the recommendation!) and get my lashes tinted at the Benefit store every few weeks. I miss my lash extensions like crazy but when I went the freelance route, this was one of the regular expenses that I cut out. (Also- there’s a great deal on Neulash right now as part of Nordstrom’s Anniversary Sale.)

8) Nix manicures, too. In the summer, I typically skip manicures (I love getting a pedicure, but hate, hate getting my nails done unless I go with a girlfriend and have someone to chat with.) Instead, I’ll apply two coats of Dior Nail Glow. My nails end up just looking like a polished, more rosier version of themselves and I don’t have to worry about chips as they aren’t very obvious.

9) Spray your perfume in your hair. It will last longer than applying directly your skin. My favorite summer fragrances are Coqui Coqui’s Coco Coco (such a mouthful of a name, but it smells like a mixture of the beach, musk, and coconut oil and comes from my favorite hotel in Tulum), and Bobbi Brown Beach (which smells an awful lot like suncreen, except way better/more expensive.)

10) Keep fresh aloe in the freezer. I know this tip sounds a little bit funny but when I was in the Dominican Republic, our hotel gave us frozen aloe at the pool and it left my skin so, so soft. They sell it at health food stores, or even at some corner bodegas if you live in New York. Just look for the big leaves, and then cut them down the middle + pop ’em in the freezer. While we’re at it, keep everything in the fridge. Eye cream, sheet masks, face mists.. in this heat, everything’s better cold!

What are your summer beauty secrets?