Like everyone else in New York, I am stressed.  I’ll be the first to admit that it’s my own fault.  I’m taking two days off of work to (squeal!) go to Berlin… one of the boyfriend’s films got into the Berlin film festival and will be premiering on Valentine’s Day.  Pretty much the coolest thing ever, except it’s the busiest time of the year for me at work.  I’ve been pulling 11-12 hour days and running around like a crazy person to prepare for my days off.

On top of the regular job, I’m supposed to be working on two other things – doing social media for the boyfriend’s company, and another project (which I am beyond excited to tell you about, but will have to stay top secret until the late Spring.)

I can’t complain because I’m busy doing the things that I love, but wow – I just crashed tonight.  I came home from work dizzy and felt like I was going to pass out.  I ordered a gluten-free peperoni pizza and ate the whole thing.  And then I had some chocolate ice cream.  Gross.

I was supposed to work on a DIY to post over the weekend… as well as some other projects I needed to finish, but instead I watched two episodes of Gossip Girl and put on a face mask. 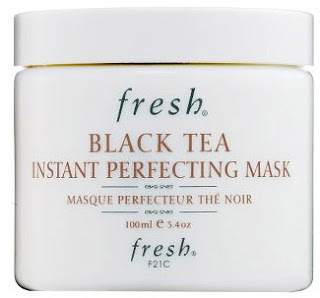 On another note, if you haven’t tried it yet, the fresh black tea mask is just heavenly.  I had figured it would be black, but its actually white.  The consistency is whipped and oddly fluffy.  It feels like spreading dessert all over your face.  After 8 minutes, my skin felt (and looked) a lot better than it did when I got home tonight.  It’s supremely hydrating and helps skin to look younger and more radiant.

I definitely recommend giving the mask a whirl.  (You can get it here.)  In the meantime, I’m heading to bed.  Tomorrow will be more productive.  (Let’s hope!)