Skip to content
The Stripe
As a huge fan of Kate Somerville, I was very excited to receive her 360 Tanning Towelette’s in my CEW Gift Bag this year.  Last night, feeling a little bit pale,  I decided to give them a try. 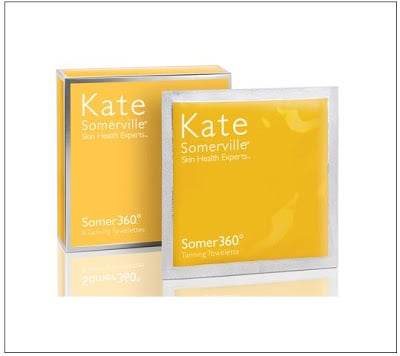 I kept to my typical self-tanning ritual (shower, exfoliate, moisturize…) and once my moisturizer had sunk in, I opened up one of the 8 towelettes that came in the package.

The towelette was bigger than I expected, so there was more than enough product to tan my whole body.  The consistency of the formula was non-greasy and almost like water.  It sort of felt like using one of those wet-naps you get after a big lobster feast.  It was totally easy to use.

This morning, I awoke to glowing (streak-free skin.)  Better yet, my skin didn’t smell funky, which is the case with nearly all of the other self-tanners I’ve tried.  My face wasn’t as tan as I would have hoped, but I had put it on over my rich night cream, which probably affected the performance of the tanner by not allowing it to sink in as well as it could have.  I would definitely recommend trying these – they make self-tanning incredibly easy!  (Just don’t forget to wash your hands afterward.)