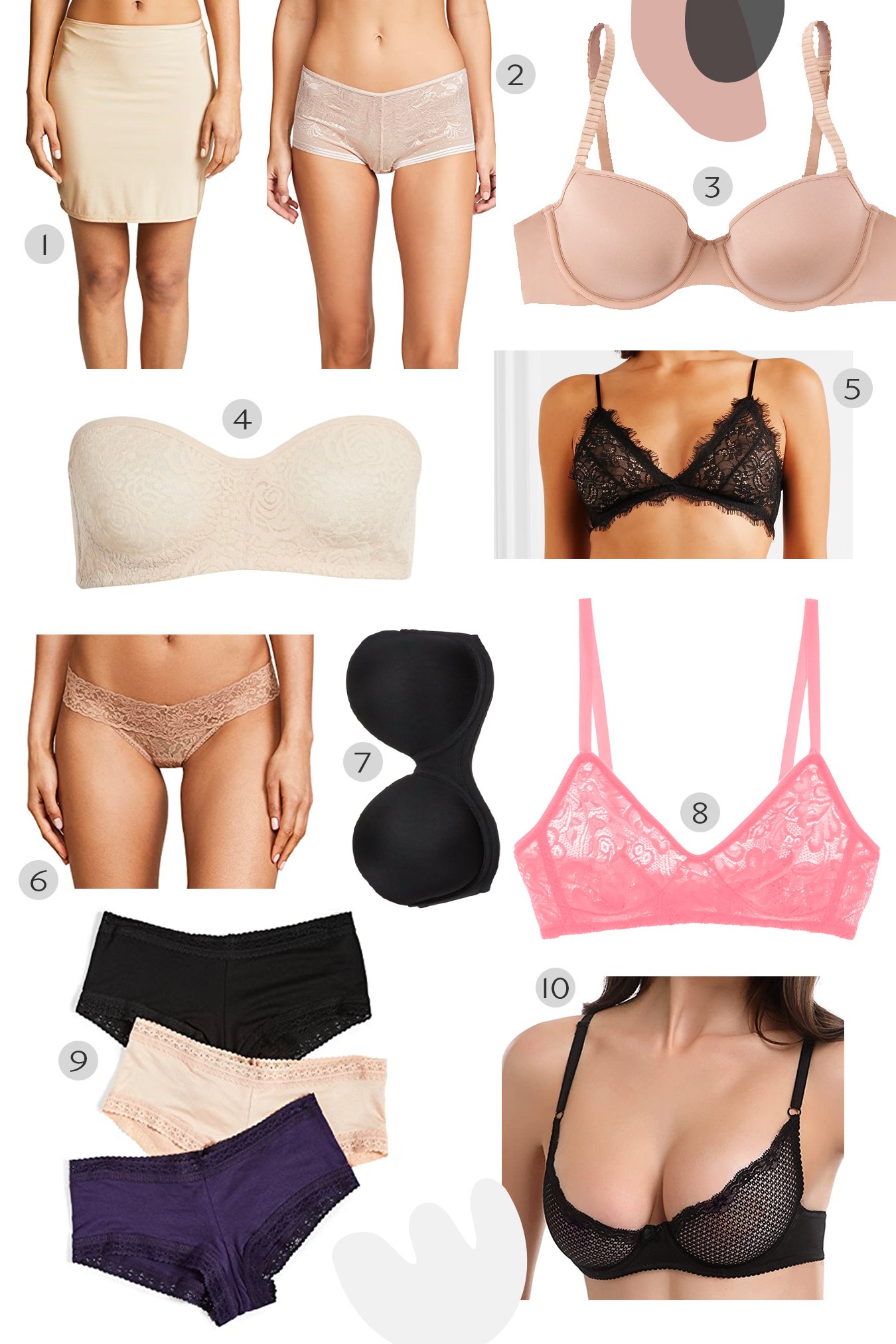 Kind of personal but something I get DM’d about a lot, especially during the summer and warmer weather when necklines get more complicated and fabrics become more sheer… underwear!!!!!

This is more about functional underwear than fun, pretty underwear (with the exception of this Amazon bra which I had to include as it’s so pretty and such a good price ($23!) and the Anine Bing bralette – though I deem this to be functional as it’s my go-to with anything low cut… it’s so pretty that I don’t care if it shows a little bit.

This is hands down my favorite strapless bra.

It doesn’t fall down, and the lace is very pretty. I have it in black as well. I don’t like added bulk so prefer unlined bras but if I’m wearing something more form fitting (or I might be cold), I go with this one, which I also have in both black and nude. Wacoal’s strapless bras really are the very best.

Edited to add: Nordstrom is mostly sold out of the lace strapless bra, Bloomingdale’s seems to have the best size assortment! Below is a little widget with every single retailer that carries it.

For an everyday bra, I usually wear the Araks bralette.

I have these in so many colors – they are cute and colorful (and so comfy). I also have several Thirdlove t-shirt bras so really just depends on the top. This might be controversial but I generally HATE t-shirt bras. They’re (most of them, at least) just unattractive and awful. This one is my absolute favorite. It’s functional, but also PRETTY. I love the pleated straps and the gold hardware and that the cups don’t come up too high. The padding is also ultra thin. It’s definitely the prettiest t-shirt bra. The Natori feathers bra would be my second favorite but this one is the winner of the bunch, far and away.

For everyday underwear, I pretty much always wear these low rise thongs from Hanky Panky.

They’re comfortable and fuss free. The black and “suntan” are my go-to colors. Not very exciting but EASY. I also recently bought a bunch of these (very pretty IMO) boy shorts. These boy shorts are nice too but not as cute.

Lastly we cannot discount the half slip!

I love this little half slip as it prevents silky dresses from clinging. It’s also great under anything that’s even slightly sheer (hello white nap dress, I’m looking at you!).

Disclosure: If you buy something through my links, I may earn an affiliate commission, at no cost to you. I only feature things I truly love here. Thanks for your support.