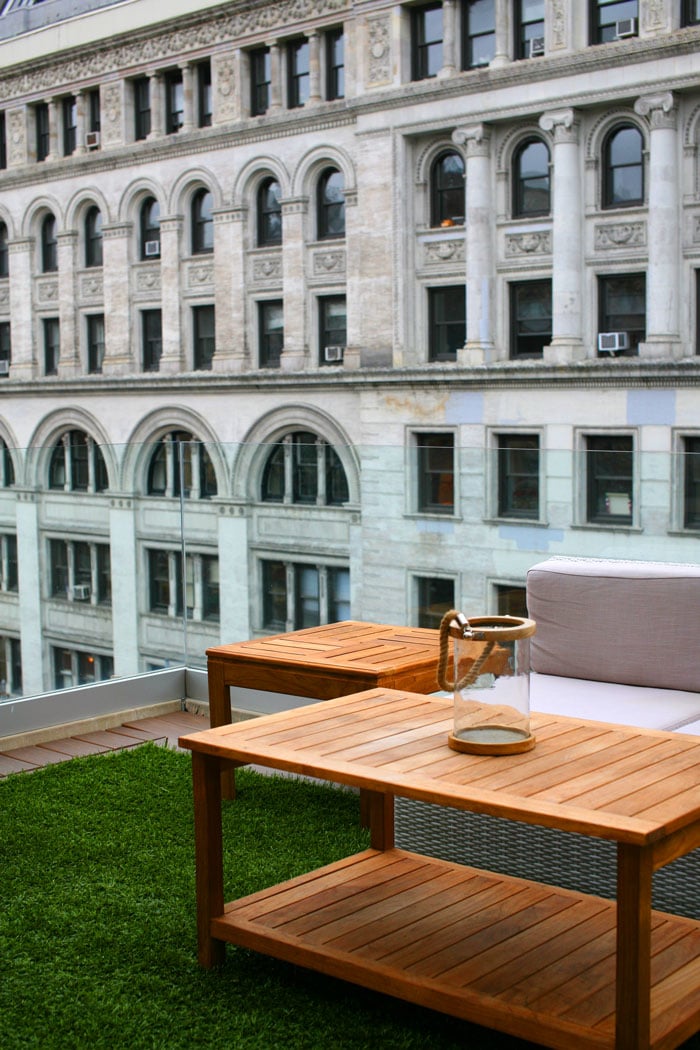 A few weeks ago, I had the opportunity to visit Lincoln’s Black Label at Home experience in New York. Located in the heart of Union Square, the home is designed to mirror the four interior themes of Lincoln’s Black Label collection. Needless to say, it was one of the most incredible spaces I’ve ever seen; and the most beautiful apartment I’ve ever seen in Manhattan. With four sprawling floors (including the most magnificent roof deck + pool ever) and perfect attention to detail, it was an amazing experience.

Lincoln asked me to photograph the space + interpret each of the four design themes — Oasis, Indulgence, Modern Heritage and Center Stage — from the perspective of a frequent traveler. I gladly accepted their challenge.

The first theme, Oasis, brings together the rooftop and one of the home’s bedrooms. Although inspired by a desert spa sanctuary, the rope textures and soothing color palette actually made me think of Cape Cod or The Hamptons. I immediately felt more relaxed and thought of the sea. Personally, this was my favorite theme. After speaking with Lincoln Motor Company’s Design Manager, Janet Seymour, I learned the Oasis theme was specifically inspired by an eco-luxury resort in Egypt called Adrère Amellal. A true luxury destination for relaxation, Adrère Amellal has no electricity and prepares meals with all locally grown food. (Take a peek at it here – and trust me, you’re going to want to book a trip ASAP.) 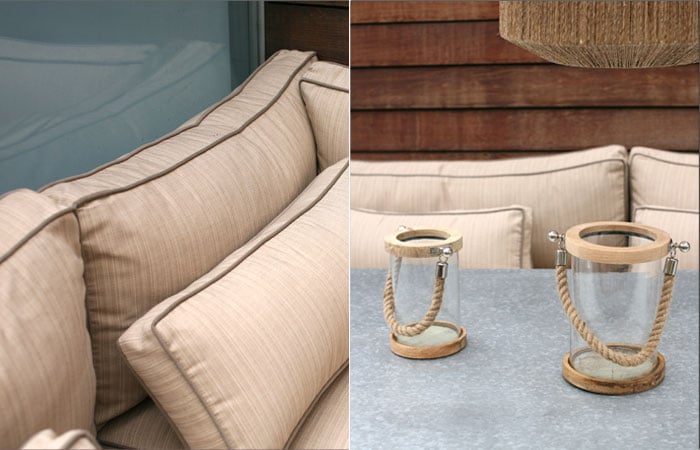 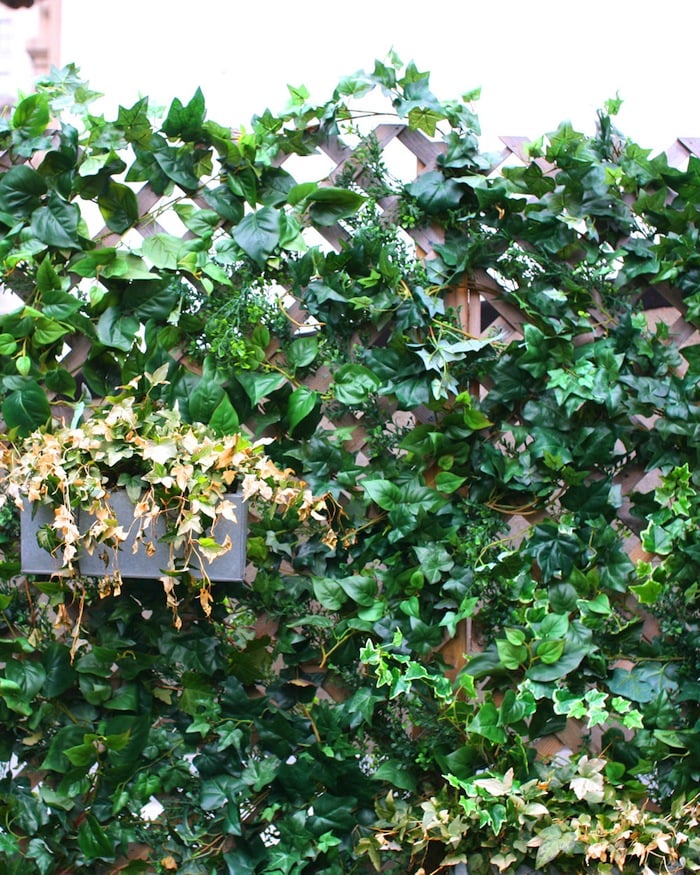 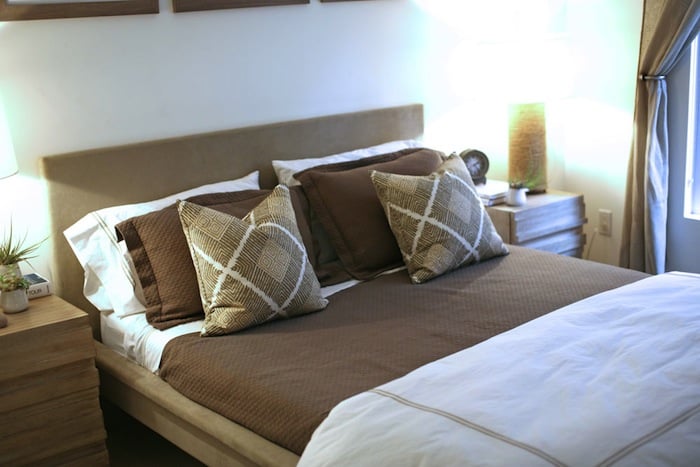 The second theme, Modern Heritage, felt classic but still channeled the avant-garde. I immediately thought of Paris. As I sat down on a chair with red velvet pillows in the living room, I was transported to the lobby of Hotel Costes on the Rue Saint-Honore, or I might have been in a cafe perusing art books with a glass of wine. The room’s soft organic shapes – with striking metal treatments in a palette of black and white – with subtle touches of red felt daring, but in a tailored, tasteful and timeless way.

Modern Heritage is Janet’s favorite theme because of the clean, simple airiness. She loves open spaces and always wanted to live in a loft or in a glass house in Malibu overlooking the sea. 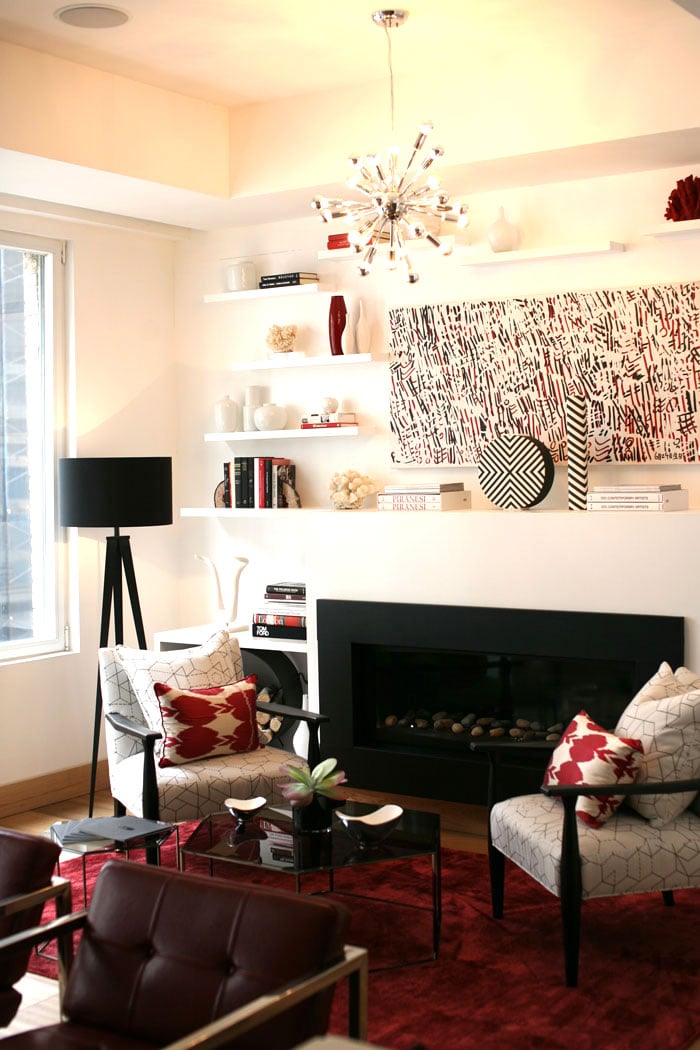 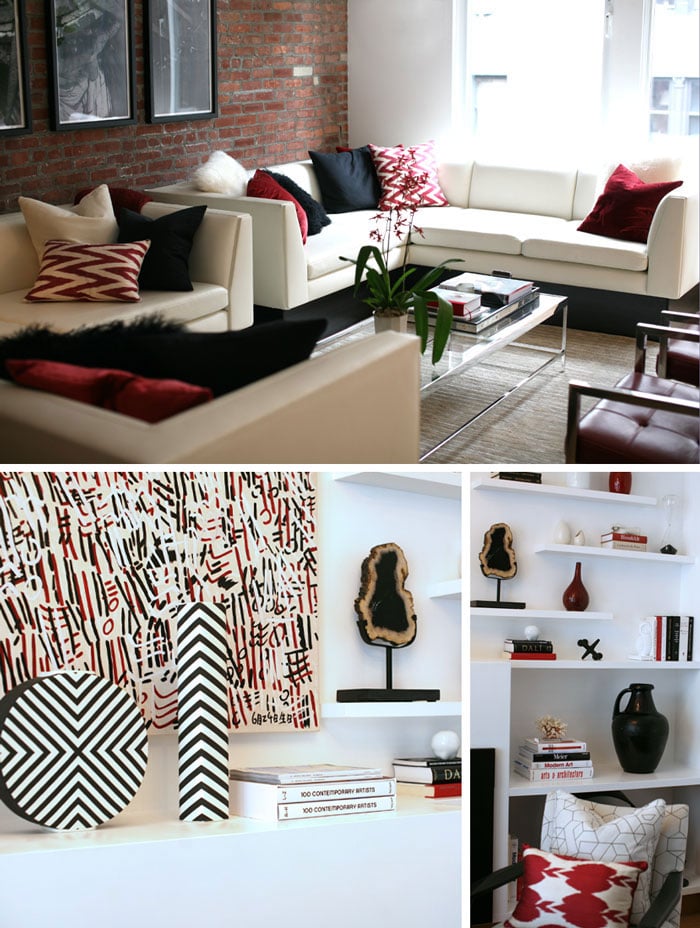 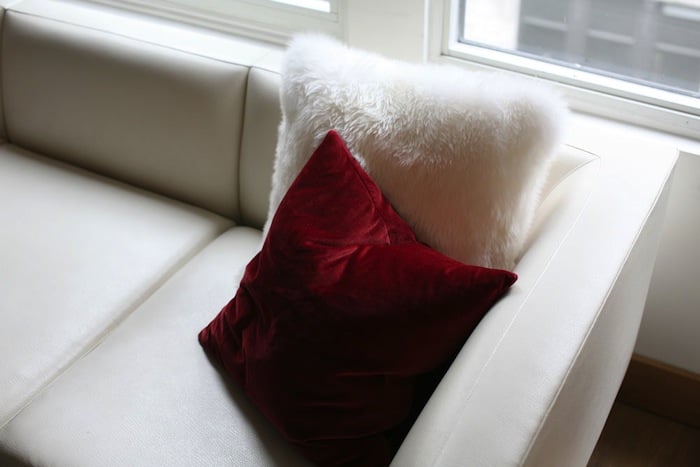 The third theme, Indulgence, was reflected in the kitchen and the master bedroom. Think rich, luscious chocolate hues with layers of plush accessories – totally warm and decadent. I felt like I was sitting next to a fire pit wrapped in a furry blanket at a luxurious ski lodge in either Aspen or the Swiss Alps… only the best.

Janet mentioned the initial inspiration for this collection started with a piece of leather that had the texture of a cocoa-dusted truffle. From there, her team began a massive exploration into the world of chocolate. Every element of this theme (the textures, woods) is meant to compliment the sensory experience of biting into a piece of chocolate.

A special note about the wood in the kitchen. It’s Ziricote wood, which is typically used in yachts or for high-end musical instruments. It is also used in for the interiors of Lincoln Black Label vehicles, which is the first time Ziricote has been used inside an automobile. 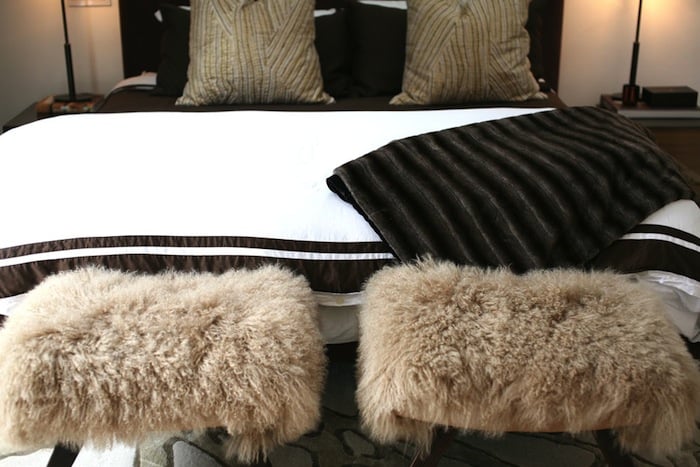 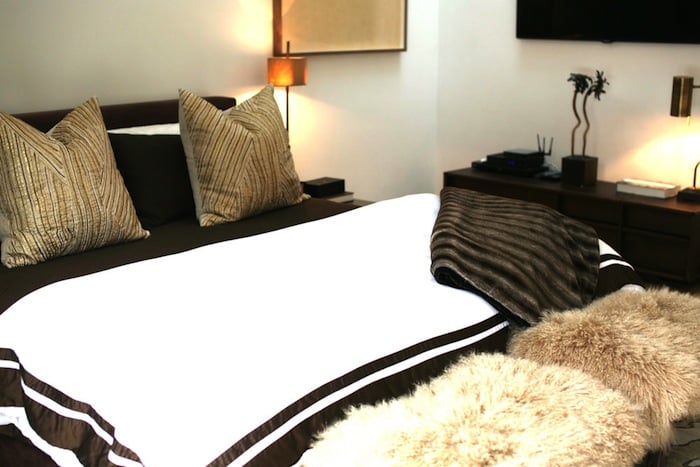 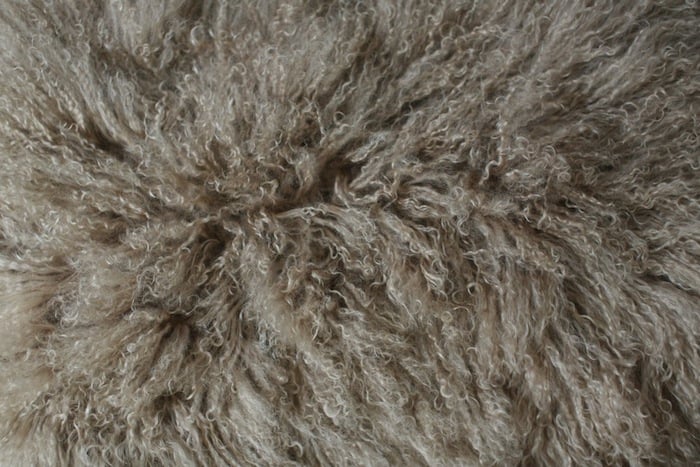 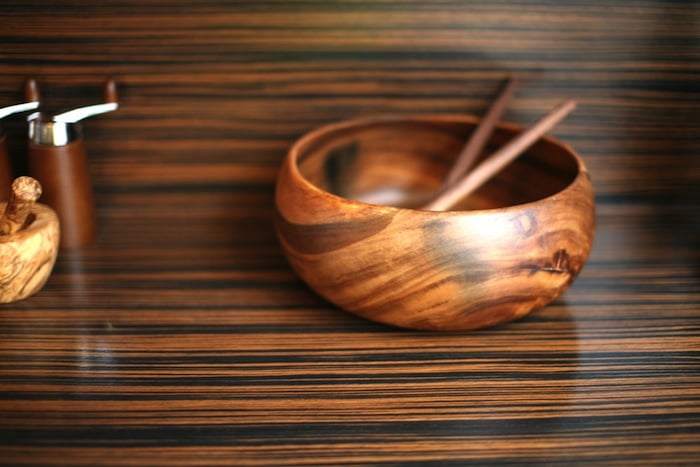 Last but not least, the fourth theme, Center Stage, is probably the most dramatic. Think red velvet curtains, film-inspired accents — the works. This theme was inspired by the fashion world and theater district, and is meant to capture the excitement of standing center stage. From a travel perspective it makes me think of Hollywood (especially old Hollywood))… waiting for a movie premiere in LA, velvet ropes, etc

Janet and her team created the original red hue used throughout the Center Stage theme. Entitled Foxfire Red, the color acts as a bright explosion and an element of surprise! 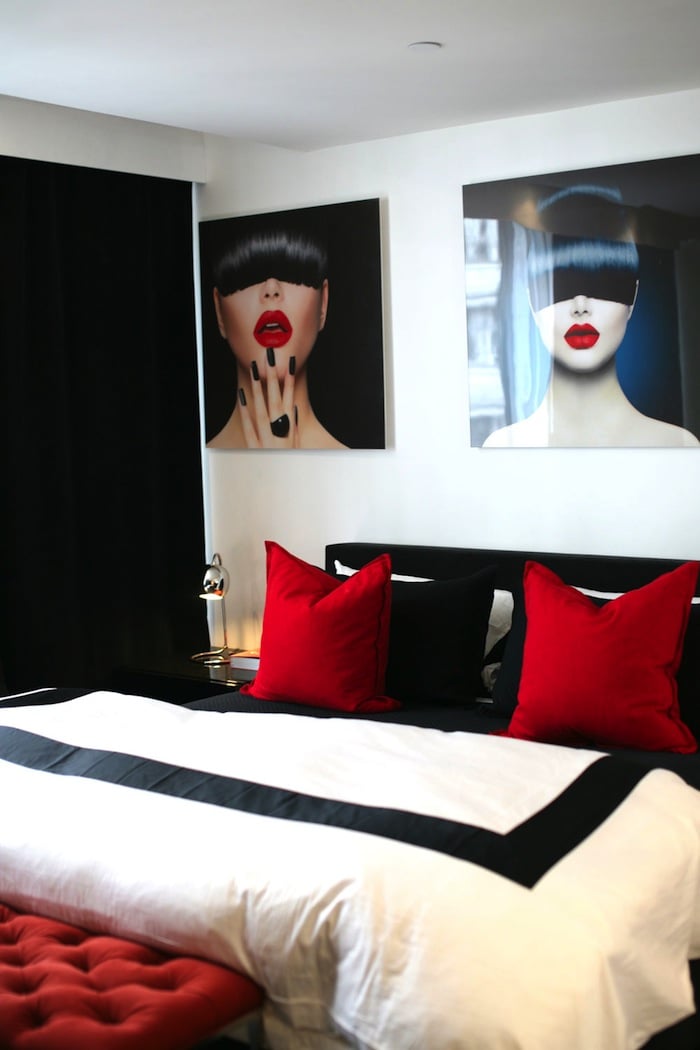 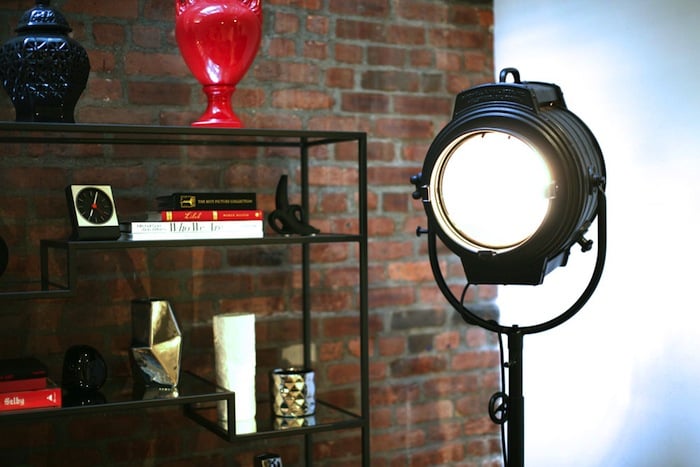 Thank you to Lincoln Motor Company for partnering on this post!