As you might have seen from Instagram, I spent the first week or so of September in Hawaii. I mentioned in this post (with a few more photos!) that my good friend Jackie got married there. The wedding was incredible, but the best part was that her and her husband stuck around for the week after to show us all the most incredible time. We ate like locals, drank like locals, and saw some of the coolest stuff. It was the perfect non-touristy vacation, and with her permission (the locals don’t always want everyone to know their secret spots!) I’m excited to share all of the details from our trip with you today! This was the best vacation. I highly recommend copying everything we did. 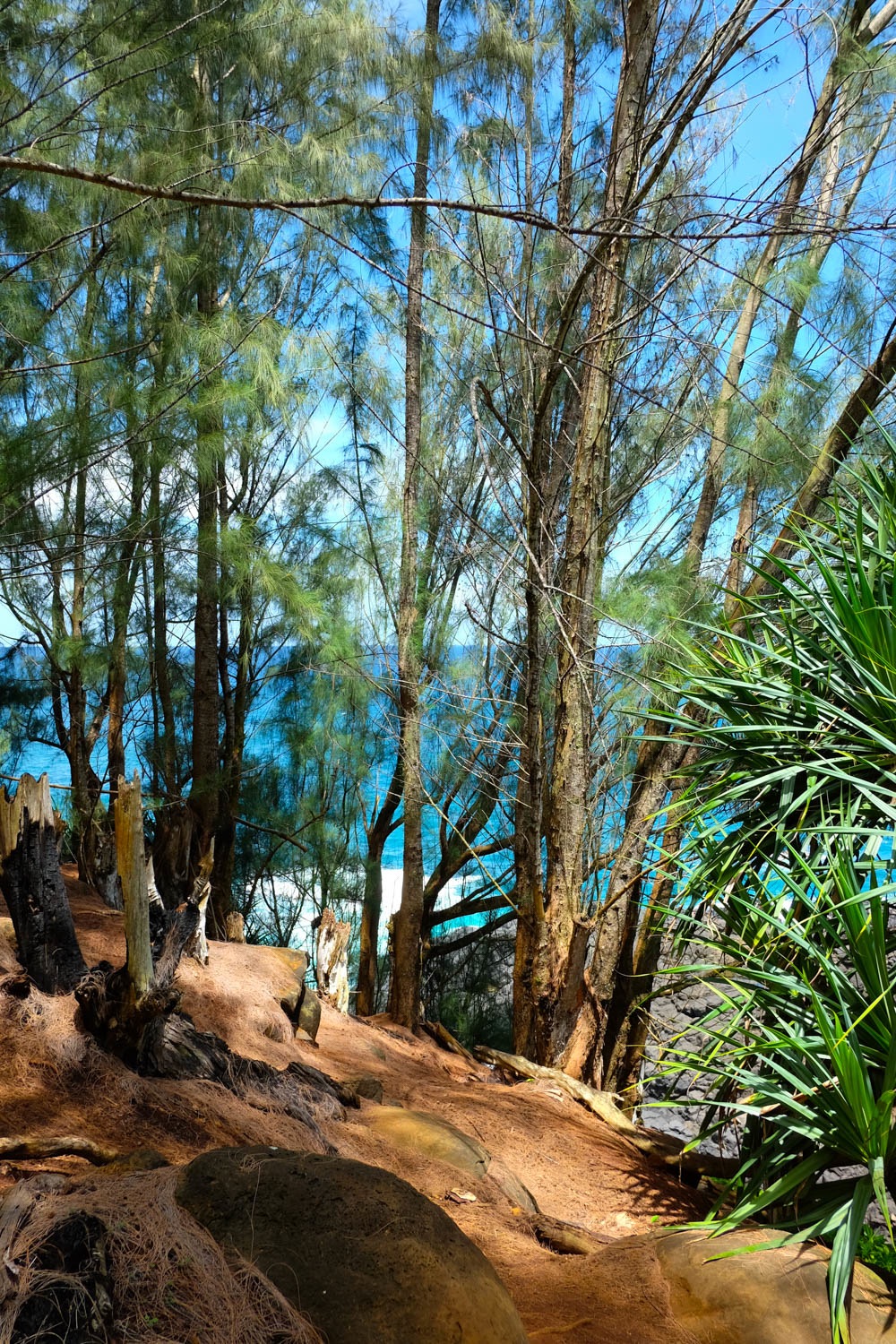 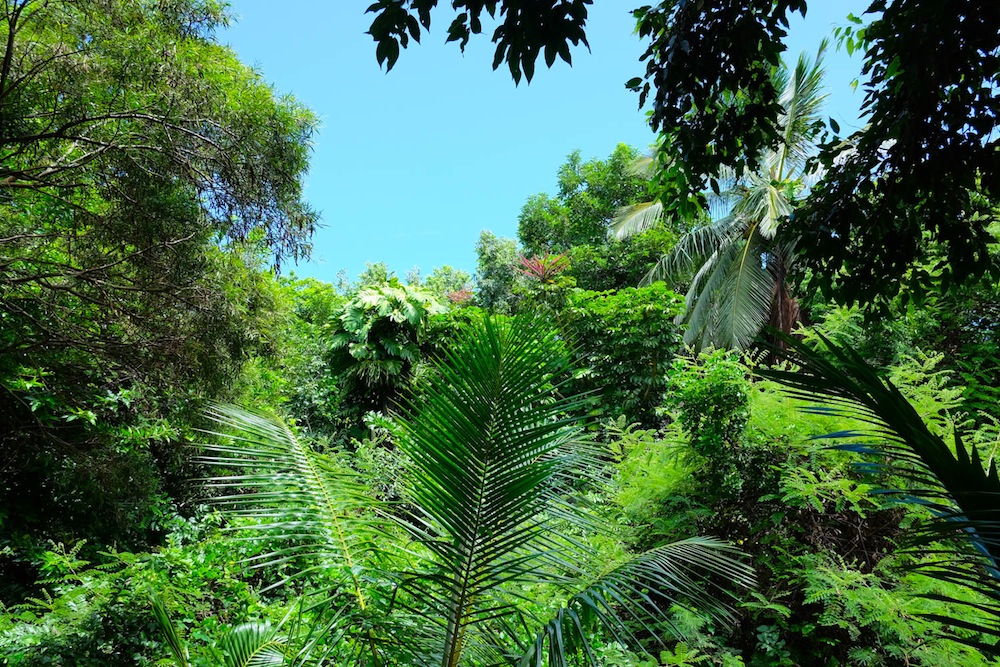 If you want to stay on the North Shore, there are two really gorgeous, high-end hotels (The St. Regis and The Westin) but both are very expensive. I’d recommend renting a house.

We rented through Na Pali Properties and stayed in one of the Hanalei Bay Villas in Princeville (this one!), which I really loved. It comfortably slept five of us and I would totally stay there again. The location is great. A two minute walk to the St. Regis, across the street from Hideaways Beach… perfect. It was also really nice having a kitchen and laundry. We made breakfast every morning, and a lot of the activities we did had our clothes very dirty… so it was a game changer being able to just throw them in the wash.

Hideaways Beach: This is one of the prettiest beaches I’ve ever been to. It’s located in between some condos and the St. Regis Hotel. You see a tiny parking lot (it fits about 8 cars) and then a dirt trail. Follow the trail, and you’ll find yourself scaling down a cliff (there’s a rope railing to hold onto but it does a little tricky.) Then, you get down to this amazing little oasis under the cliff. The only thing is that if you are there for sun bathing, it’s not necessarily the best as it’s shady under the cliff. We layed in the sand by the water and got tan. It’s great for snorkeling and surfing. Bonus points for all of the hot guys surfing. There is a lot of eye candy here, my friends. So many surfers. Ugh.. take me back! 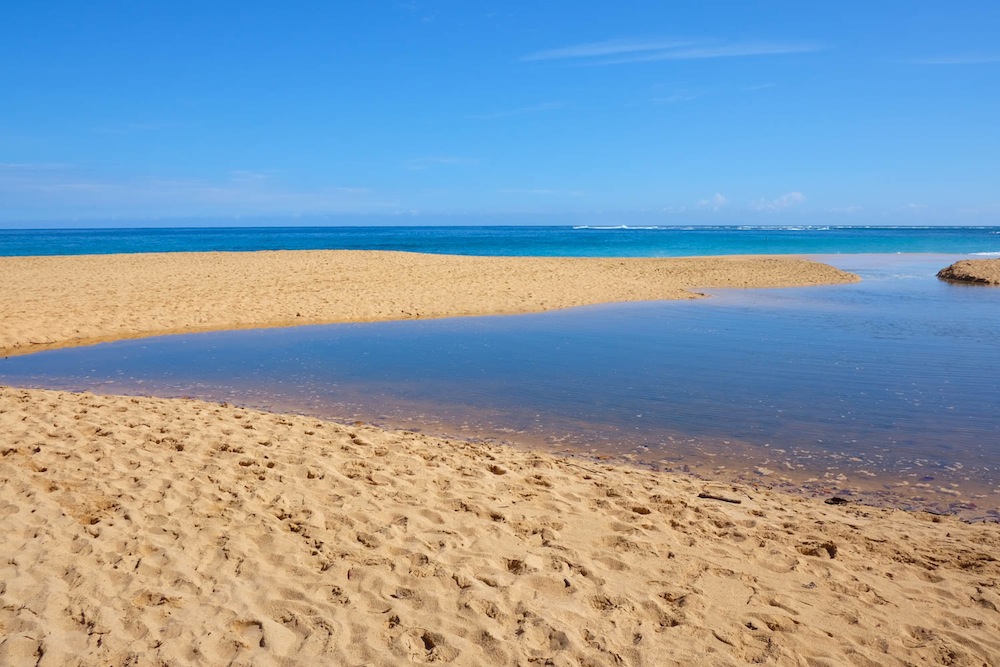 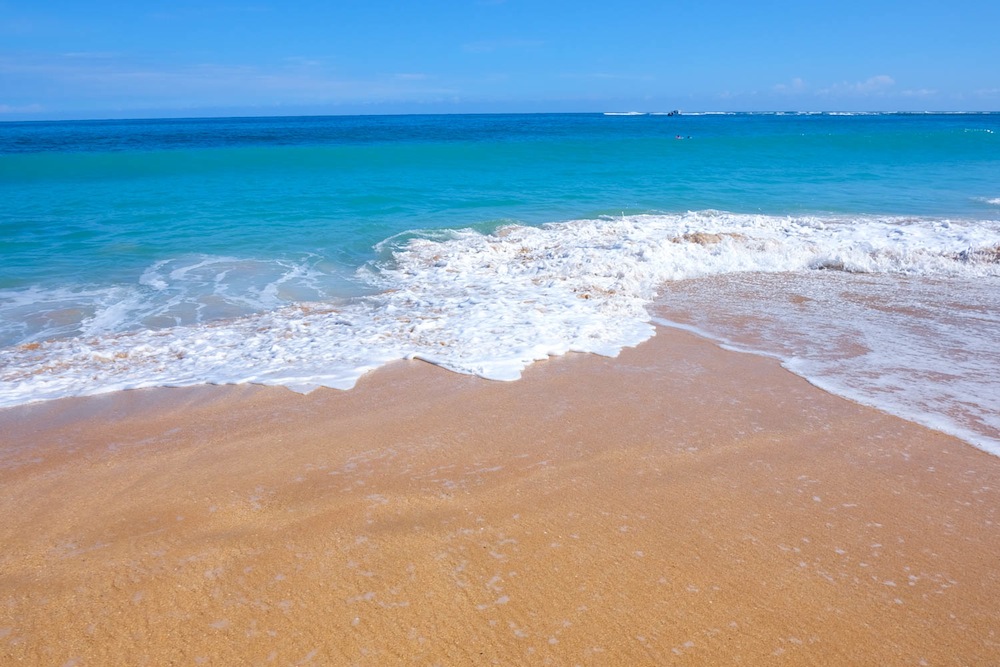 Tunnels Beach: This beach is gorgeous, but maybe the most overrated of all the beaches we visited. It was a lot more crowded than the other beaches (probably because it’s the easiest beach to find as it’s publicly listed!) but it’s really nice. There’s also a nice man selling fresh coconuts, which was pretty cool. There is great snorkeling here! 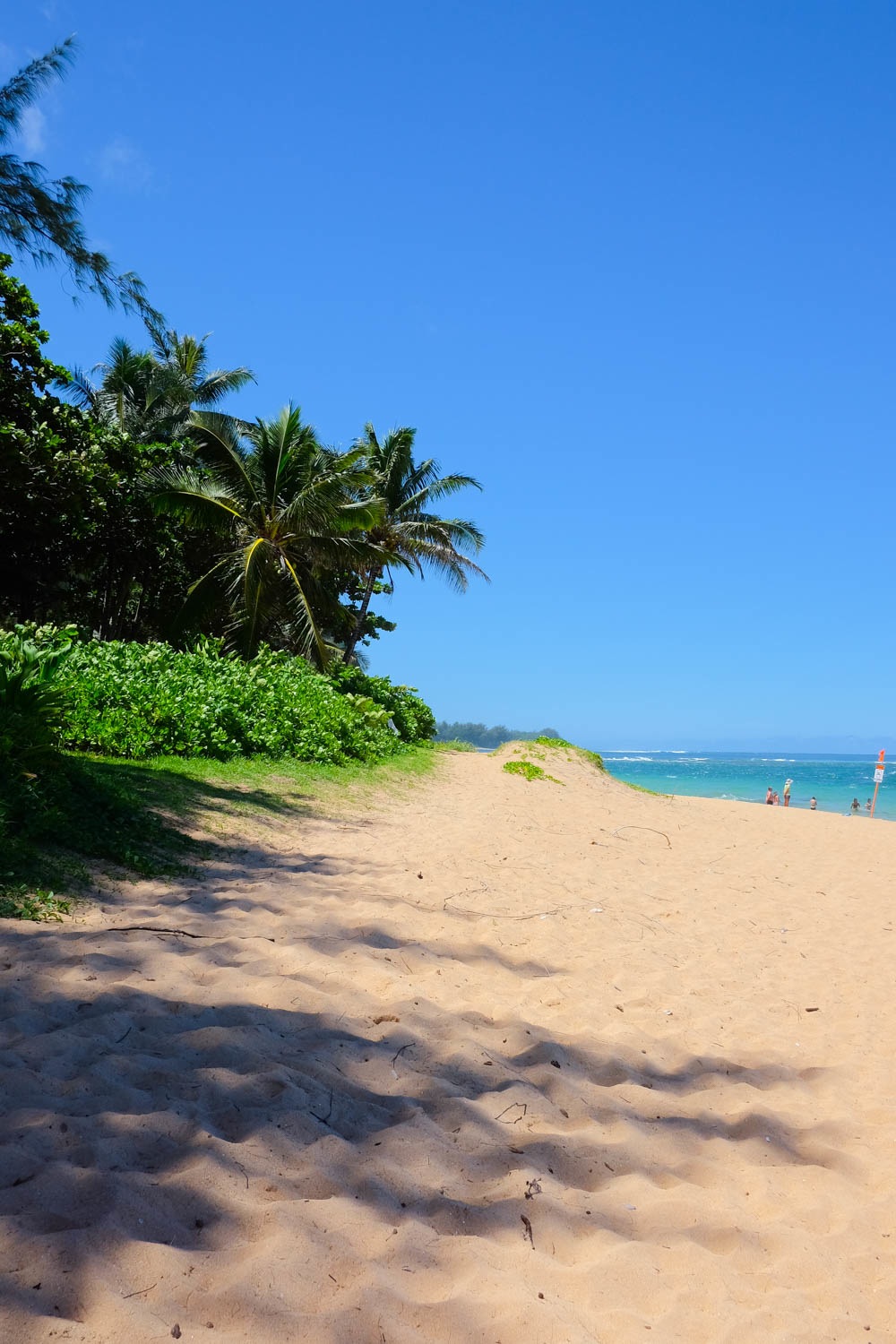 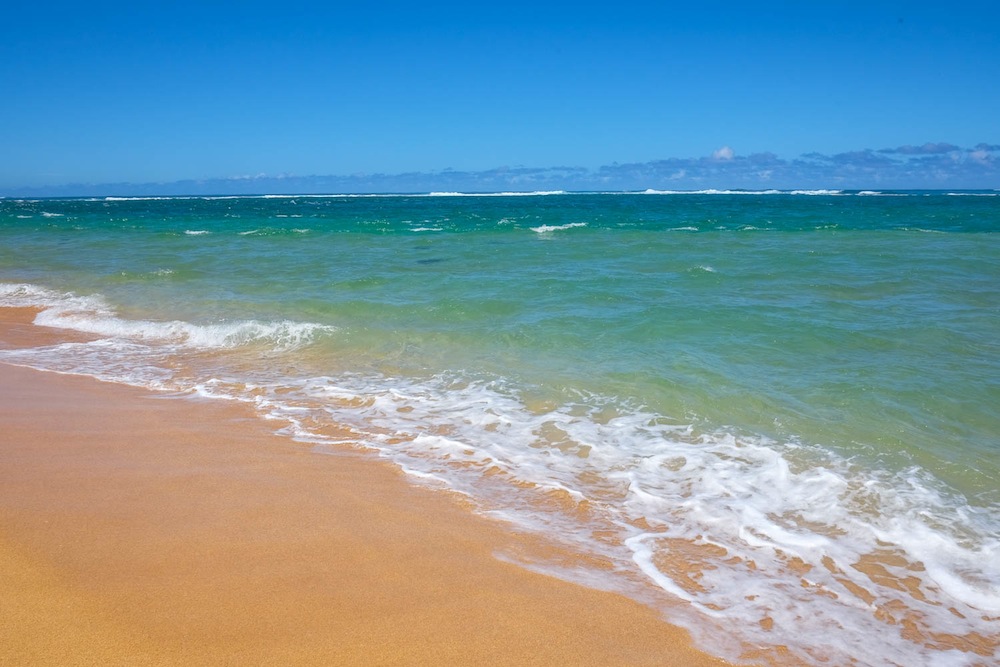 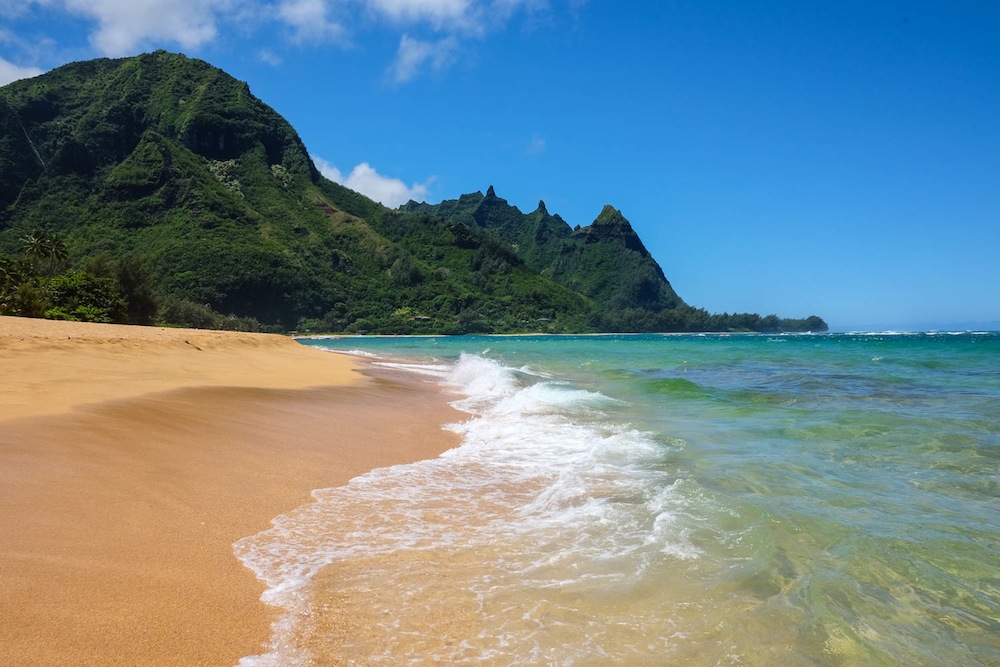 Turtle Lagoon: This is a locals only kind of spot. These are spotty directions… but if you drive about a quarter mile past Tunnels Beach and drive down a private dirt road, you’ll get to this little beach… and their are sea turtles, EVERYWHERE. This was one of my personal favorite parts of the trip. The beach was empty, the water was crystal clear, and swimming in the waves with all of those turtles is something I’ll remember forever. Another way to get there would be to get to Tunnels Beach, and then take a left and just walk down the beach for a bit until you spot the turtles.

Lumahai Beach: This is one of my favorite beaches, and it’s my friend Jackie’s favorite beach in the world which says a lot. BUT. It is dangerous. You have to be really careful (read the Tripadvisor reviews) because depending on the weather and other conditions, it can be super dangerous. We went here twice. On the first day, it was really windy and there were huge waves. So we sat in a tiny tidal pool and watched the waves. But the second time, the water was very calm, and a bunch of us jumped off a little cliff. That was probably the highlight of the trip for me as I’m such a scaredy cat… I’d never done something like that. 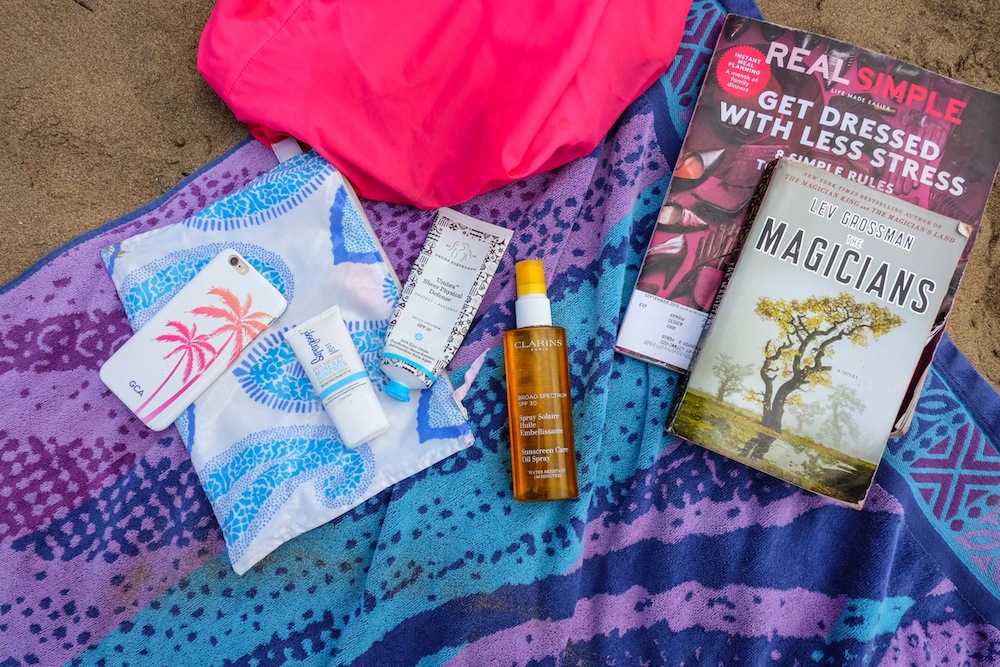 Hanalei Bay: Frequently referred to by the locals as “The Bay,” this beach is really beautiful (and so peaceful… not nearly as wavy or potentially dangerous as the others). It is about two miles long, and is a great place to spend the day (it’s also really close to town and all the restaurants.) Also, in 2009, it was named the best beach in America!

Waikokos Beach: This beach was another one of my favorites and also known for its surfing. Waikokos literally means water and coconuts in Hawaiian, so that’s what there is.. water, + palm trees and coconuts! You park on the street and climb down a (slightly dangerous) path… to hit bliss. We laid out in the sun for hours and played in the surf. It was probably the most picturesque (and untouched/developed) of all the beaches we visited. 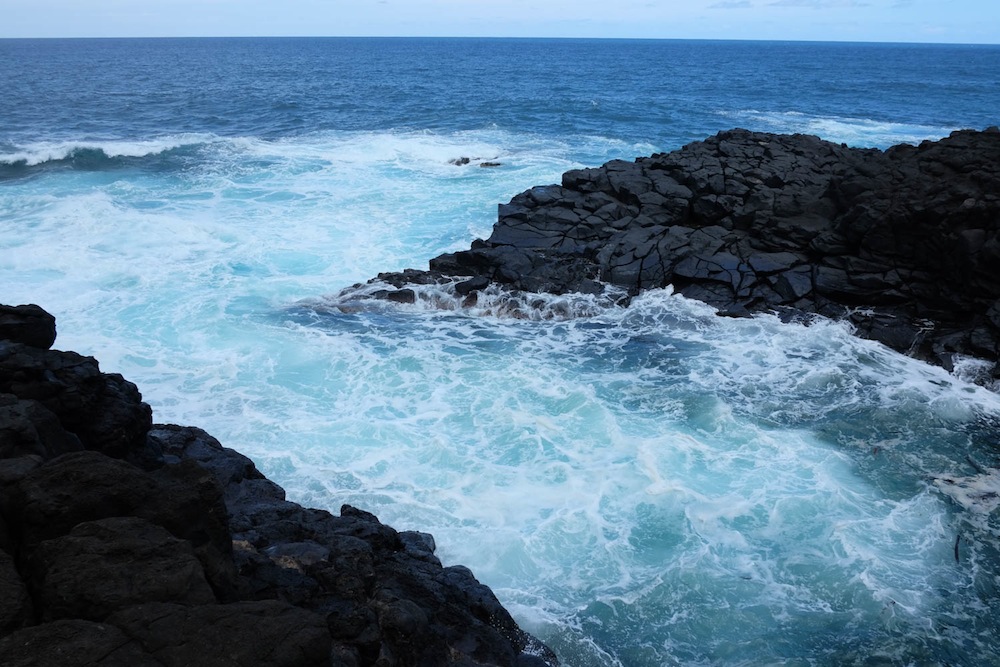 Queen’s Bath: Another really cool little hike… located just a few minutes away from our villa. It’s incredible. The “hike” isn’t a true hike as just about 1/4 mile long… but it is quite steep and very muddy at times. We were covered in mud by the end. At the end is well, a bath! It was crowded when we got there, so we didn’t jump in, but I would imagine that if you are feeling ambitious, it would be the perfect place to watch the sunrise. I did this wearing Adidas shower slides… I’d recommend not doing that. Bring sneakers! 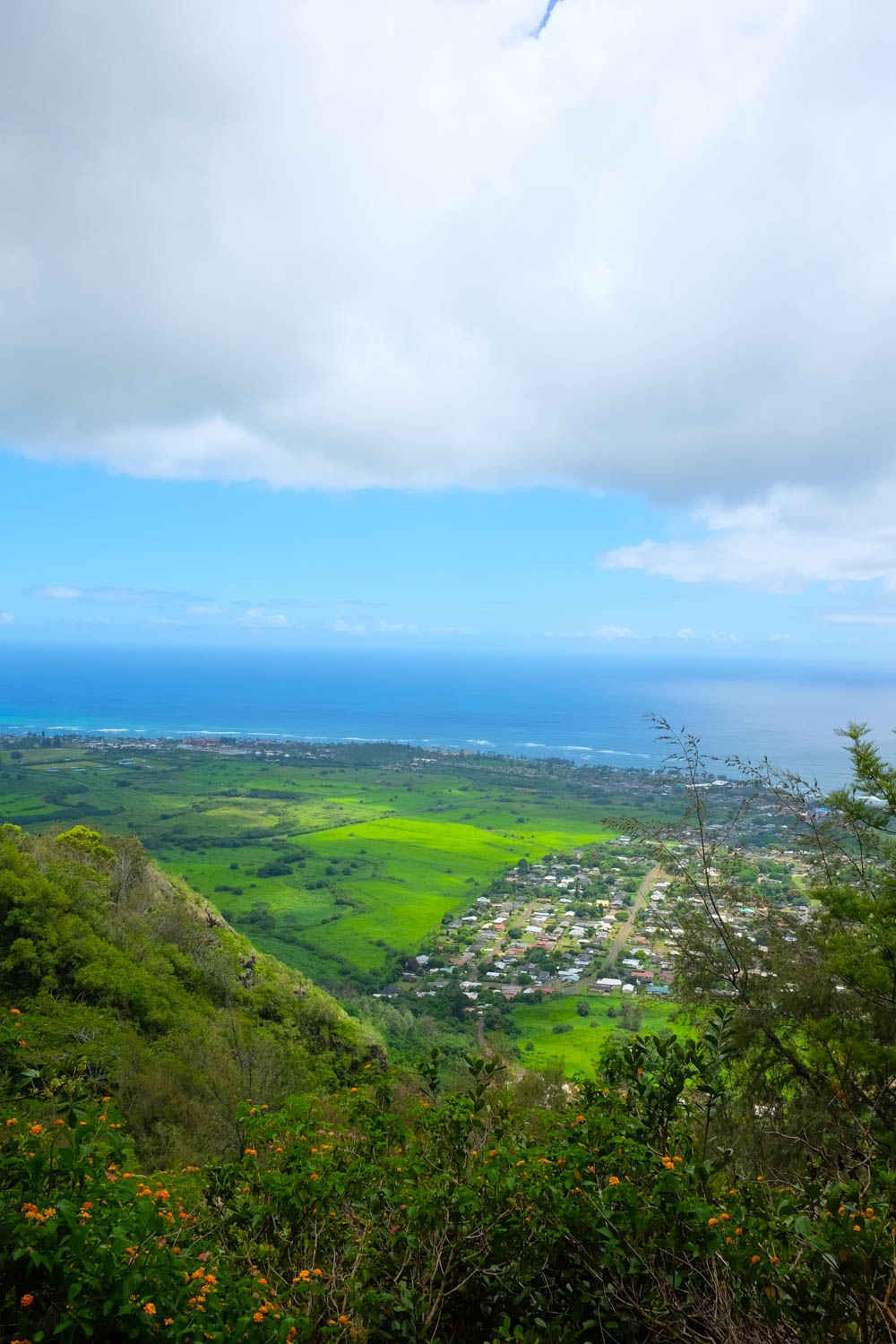 Sleeping Giant Hike: I will preface this by saying that I’m not as athletic or in shape as I’d like to be. One of the big lessons from this trip is that Soul Cycle and Barre class do not prepare you for real life adventures. So we had really wanted to do the 8 mile waterfall hike that everyone raves about, but it was hot and I figured I’d probably die. My cousin recommended this, and it sounded like a reasonable, responsible alternative.. It was still pretty challenging (especially in the middle of the day – it was hot, hot, hot!) It’s about 2.5 miles up, and took us about 40 minutes to reach the top. I won’t lie.. by the end, I was covered in sweat and thought I was going to die. But the views were worth it.

Where to Eat + Drink:

The Dolphin Fish Market and Restaurant: This was my personal favorite. I would have had it for every meal if my friends would have agreed to it (and we got pretty close). There’s a restaurant to the right and a fish market to the left. The restaurant serves up amazing sushi and poke bowls, but really, it’s all about the fish market. They have the most incredible uncut sushi rolls that they’ll slice up for you on the spot. Get the Ahi. I had at least one a day and am being serious when I say that I am still having withdrawal. The fish was so fresh and delicious that it puts the best restaurants in New York to shame. For real.

Bar Acuda: I really loved this spot, but it’s New York food (super yummy tapas). The food is incredible, but when I’m on vacation I’m more into trying the local flavors (i.e. all of the Ahi). I can’t say a bad thing about this spot (everything we ate was delicious) so I will say that this is a good fancy spot for when you’re tired of eating poke bowls and sushi.

Tahiti Nui: Referred to as “The Nui” by the locals, this is a great spot. It’s kind of dive-y but so much fun. We went for dinner one night and I had pizza… but only because I was told that it was the best thing on the menu. Guys. The Hanalei Bay Pizza (to be specific) is insanely good. Don’t ask questions, just order it. It’s covered in shrimp, basil, and garlic; and completely lived up to the hype. Go here, and get the pizza… even if that feels weird! Bonus points for the live music (Jackie’s wedding officiant is a regular!) And if it looks familiar, it’s because it was featured in The Descendants. 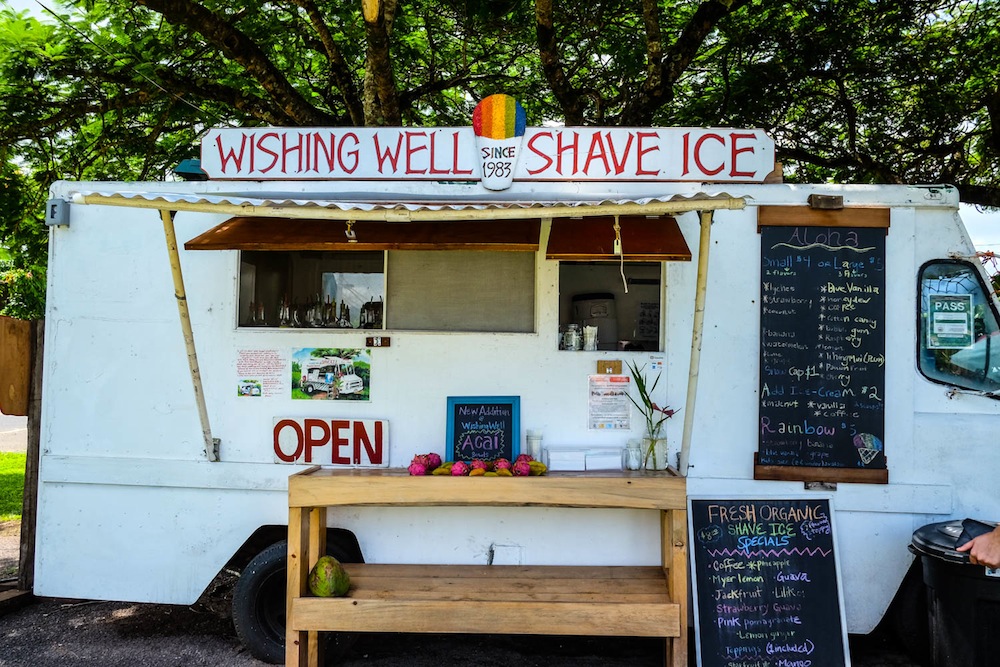 Wishing Well Shave Ice: Oh my god you guys, I can’t believe I’d never had Shave Ice (the locals drop the d, don’t say “Shaved!”) It is my favorite thing ever. Jackie is a snob about her shave ice and told us that the only place we were allowed to go was Wishing Well. And we listened… going once, sometimes twice a day. My favorite was the lilikoi (another fun fact: lilikoi means passion fruit in Hawaiian) and we ultimately decided that the best way to order it was two flavors (lilikoi and coconut for me) over a scoop of vanilla ice cream. So. good.

Hanalei Gourmet: Everything here is delicious, but all I really need to say is that you need to go on Thursday night, and have dinner. Why? Because Thursday is fish taco night. Duh! Fish tacos for everyone. I had them and ate every last bite.

The St. Regis: This may be debatable, but in my humblest of opinions, the St. Regis was the best place to grab a cocktail and watch the sunset. With panoramic views of the water, the St. Regis’s standard champagne sabering ritual (I’d seen it before at their Deer Valley location), it makes for such a fun affair. I would recommend ordering the ginger margarita and/or the smoky paloma. We did this twice and it was a fun and fancy way to start our night out, especially as everything else we did was so casual. 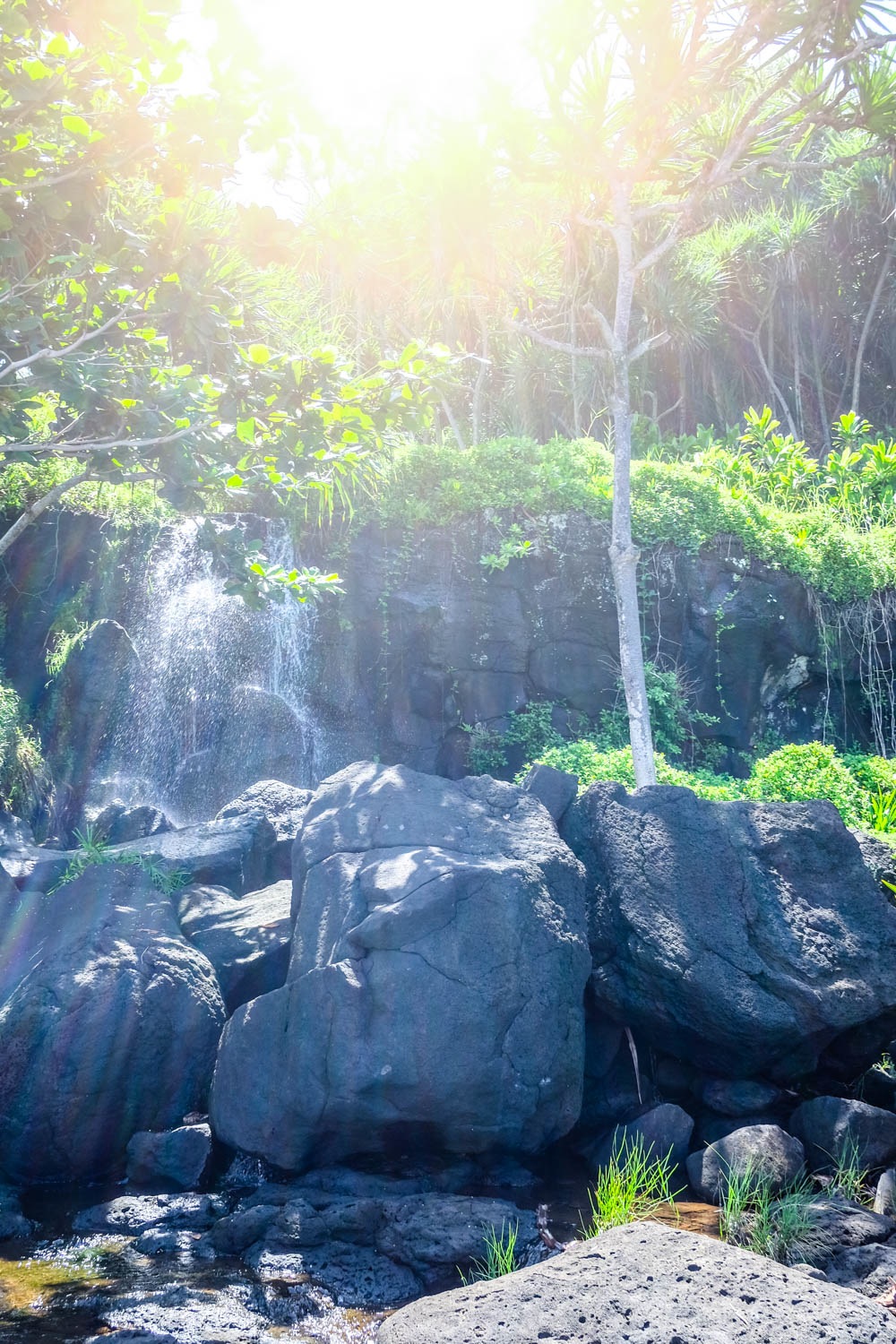 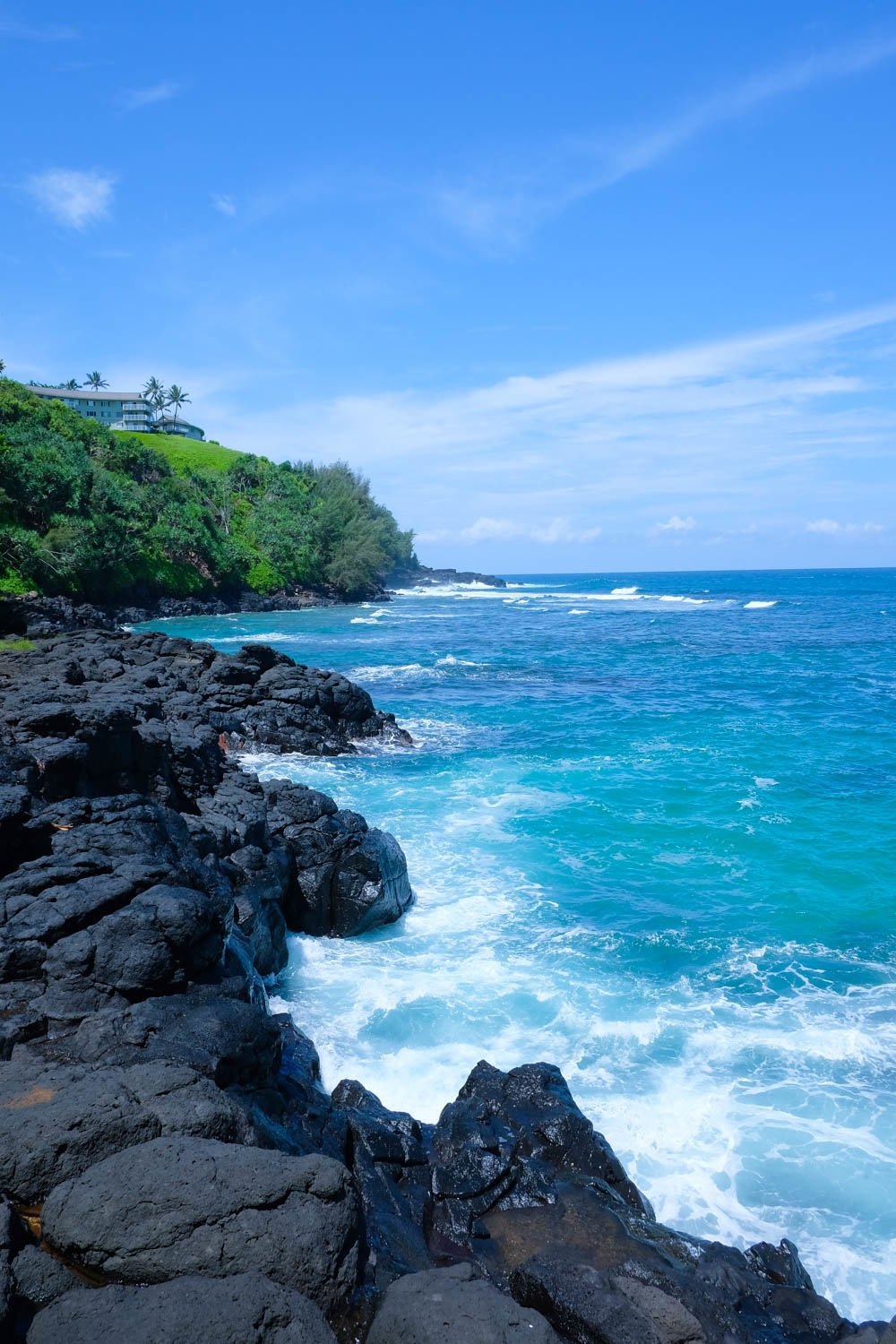 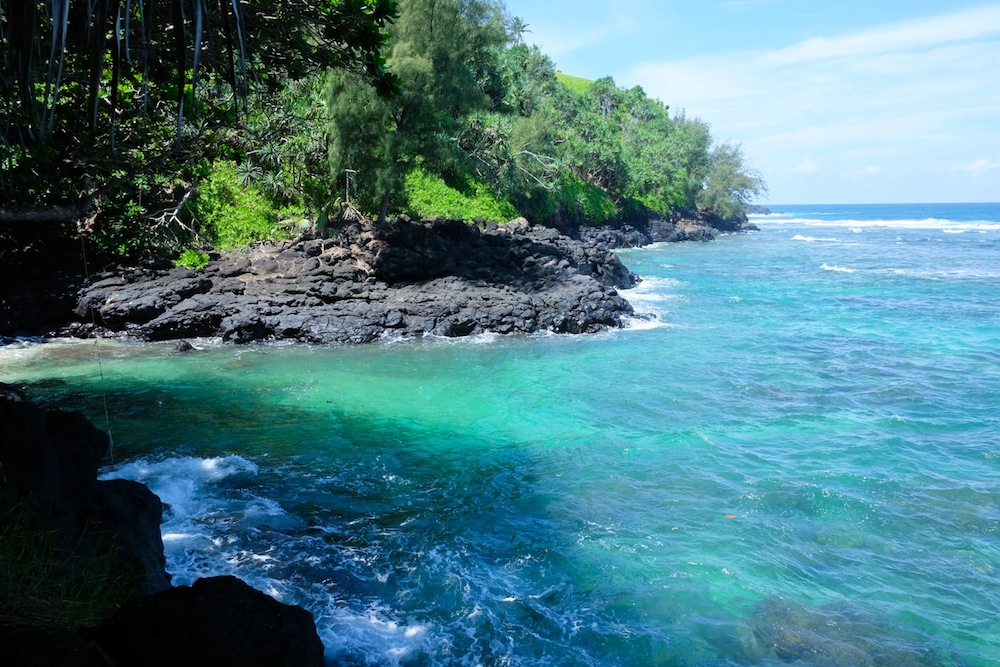 So that’s that. That’s our trip. I want to go back. Preferably, now. The photos above are from another little climb that we did, but I wouldn’t be able to tell you where to go to do it. We walked through this gated community and climbed over a fence… and hiked down a cliff. to get there. I don’t know exactly where we were, and can’t encourage you to go trespassing, so I will just leave it at that. Such adventurers! I do have just a few more notes before I leave you…

Things that are supposed to be great that we didn’t do: Na Pali Coast Boat Ride // Doors off Helicopter Tour// Waterfall Hike

Things to know ahead of time: