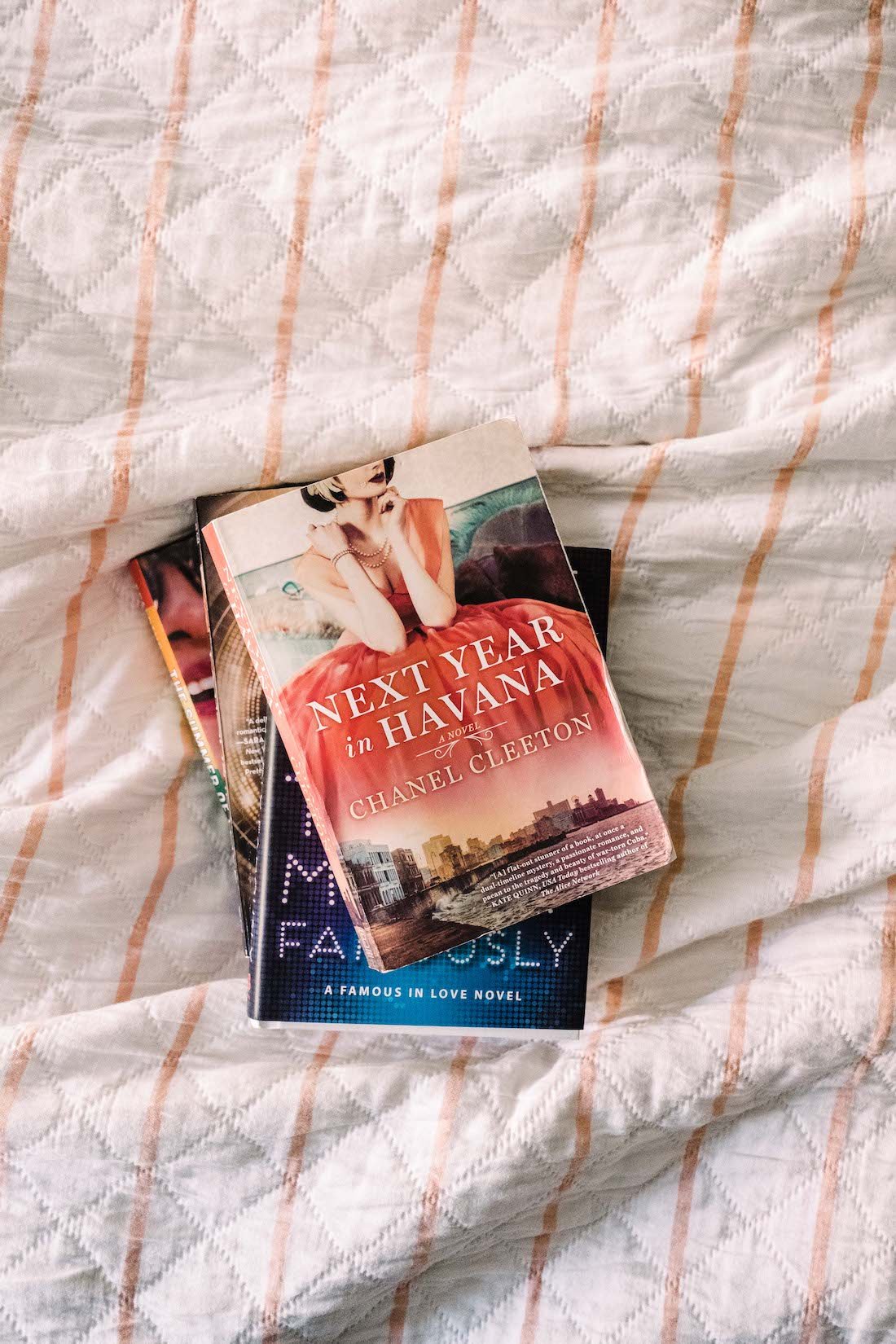 There are definitely months where I’m guilty of reading a lot of trash. Last month comes to mind, cough cough. 😉 I don’t feel badly about that; sometimes I am just stressed and want to only read junk food books. And reading is reading. You should feel good about reading, no matter what it is you choose to read. This, however, was not one of those trash months. Educated was hands down, one of the best books I’ve read in a very long time. It was so poignant and raw, deeply upsetting but also deeply inspiring. And then there was the Cuba prep. Waiting for Snow in Havana was an incredible memoir of sorts and Next Year in Havana was fantastic historical fiction.

We can’t leave out All We Ever Wanted which I felt so lucky to receive an advance copy of (and passed onto a lucky group of you guys, over in the Facebook group)! Emily Giffin is just the best – her books never disappoint. It was a really, really good month of reading.

If you’re looking for a book, don’t forget – you can always check out my Book Club Page. I have literally listed every.single.book I’ve read in the past few years…. and you can filter + search by genre (memoir, light read, historical fiction, thriller, etc!) to find exactly what you’re looking for And of course, you can also take a peek at May’s reading list. In case you can’t wait til next month, I always add whatever it is that I’m currently reading to my Amazon Shop as I go… I know it’s nice having everything in one place.

AND! Please comment and tell me what you are reading… your suggestions are my FAVORITE… I shop the comments section of these post – you always have such good recommendations for me, which I really appreciate!

* All We Ever Wanted, by Emily Giffin. (on sale 6.26) This is another advanced copy (which was so exciting for me as Emily Giffin is one of my most favorite, favorite authors. (I’ve read all of her books and even went to meet her like a total fangirl when I was in Charleston a couple years ago.) This one is set in Nashville, telling the story of two families: the well to do Brownings and their son Finch; and the less fortunate Tom Volpe and his daughter Lyla. One night, Finch makes a terrible mistake which affects Lyla.

The story is told from three perspectives: Nina Browning (Finch’s Mom), Tom Volpe, and Lyla. The story covers so much. There’s a little bit of a mystery for parts of it. It talks a lot about bullying. And it shows all the ways a marriage can go wrong and the fact that material things don’t matter as much as we think they do. Like all of Giffin’s books, this one is heartwarming and sweet. Her books always just feel great to read (she’s an excellent storyteller!) and leave you feeling warm and cozy inside when you’re done. I read it this when I was having a bad week and it felt like a giant mug of chamomile tea – just the thing.

* Educated, by Tara Westover. Honestly I don’t remember the last time I read a book that affected me so dramatically. This  is Westover’s memoir, and it is so so good. She grew up in the mountains of Idaho with parents who belonged to a radical subset of the Mormon church. They were anti-government, anti-medical establishment, anti-school. Tara never saw a doctor or a nurse, didn’t get a birth certificate until she was 9 years old, and did not set foot inside a classroom until she was 17.

This book is really hard to read at times – it’s also hard to believe that it’s all true because it’s one of those cases where the truth is stranger than fiction. I have been telling everyone I know to read it (and am so grateful to Carly for recommending it to me) as it’s one of the best books I’ve read in ages.

* The Summer of Jordi Perez, by Amy Spalding. This book is really cute. It’s a YA read, and a fast one at that. It’s nice to see YA books becoming more inclusive. Seventeen year old Abby Ives is fashion-obsessed, gay, running a plus-size fashion blog… and just landed her dream job as an intern at her favorite boutique. The book covers several relationships – with her friends (the friend drama is seriously relatable… even though I’m twice Abby’s age I could totally relate), with her mother (who runs a healthy living blog/food empire), her new friend Jax, and (most importantly) her co-intern Jordi Perez who she ends up falling in love with (while competing with for a part time job).

This book was a nice break after Educated (which was pretty heavy and hard to read), and what I loved most was how relatable and real all of the relationship dynamics were.

* Famous in Love + its sequel Truly Madly Famously (by Rebecca Serle) was this month’s junk food… (and also what we discussed over on the podcast!) Total junk food but so fun. Paige Townsen is an obscure highschool student in living in Oregon when she decides to audition for the movie adaptation of a major blockbuster book series (think Harry Potter or Hunger Games!) Within weeks, she’s off in Hawaii starring opposite Rainer Devon (her gorgeous and dreamy co-star, also one of People‘s sexiest men alive). Soon though, she finds herself in a little love triangle – having to choose between Rainer + her other co-star, Jordan. These books are fun and silly, and who doesn’t love a good love triangle. Also, they’re now a TV show on Freeform. The TV show follows a totally different plot line but of course I still binge-watched the whole thing.

* Waiting for Snow in Havana by Carlos Eire. This is an older book (the author wrote it around 2000) but a friend who’s opinion I really respect told me I had to read it before going to Cuba and so I did. It’s dense, hard to read at times, and took me a long time to get through. If you’re thinking about going to Cuba (or just interested in Cuba), this is a must. It’s a Cuban boy’s memories from growing up in an affluent family in Havana in the fifties before he was a part of the Peter Pan Project where 14,000 Cuban children were airlifted out of the country in 1961.

The original plan was to be reunited with family in 3 months; no one thought Castro would stay in control for as long as he did. It ended up taking three years for his mother to join him and his brother (his father stayed behind; refusing to leave his possessions). He lived with a foster family and then in an orphanage; ultimately ending up with his uncle. The kids, growing up were so wild and violent with each other. Constant fighting, going car surfing… it was definitely something different. And his memories are just beautifully written. I really, really enjoyed this one.

* Next Year in Havana, by Chanel Cleeton. Another book about Cuba, this one being historical fiction. This one, I liken to the Cuban version of The Dollhouse (another favorite). It alternates between modern day and 1958 right before/during/after the revolution. It’s the story of Elisa (growing up very wealthy in Cuba during the Batista era – her father, a sugar baron) and Marisol – her granddaughter. Marisol sets foot in Cuba for the first time in her life at age 31 to scatter the ashes of her beloved grandmother. She gets to know the city, she meets an alluring man, and she uncovers some huge secrets that her grandmother had been hiding.

The author’s description of Cuba is so perfect that it made me feel like I was right back there. And the plot itself was really good. There were (two!) love stories and quite a bit of mystery. If you’ve been to Cuba, it will make you nostalgic, if you haven’t, you’ll still enjoy it. Highly recommend! 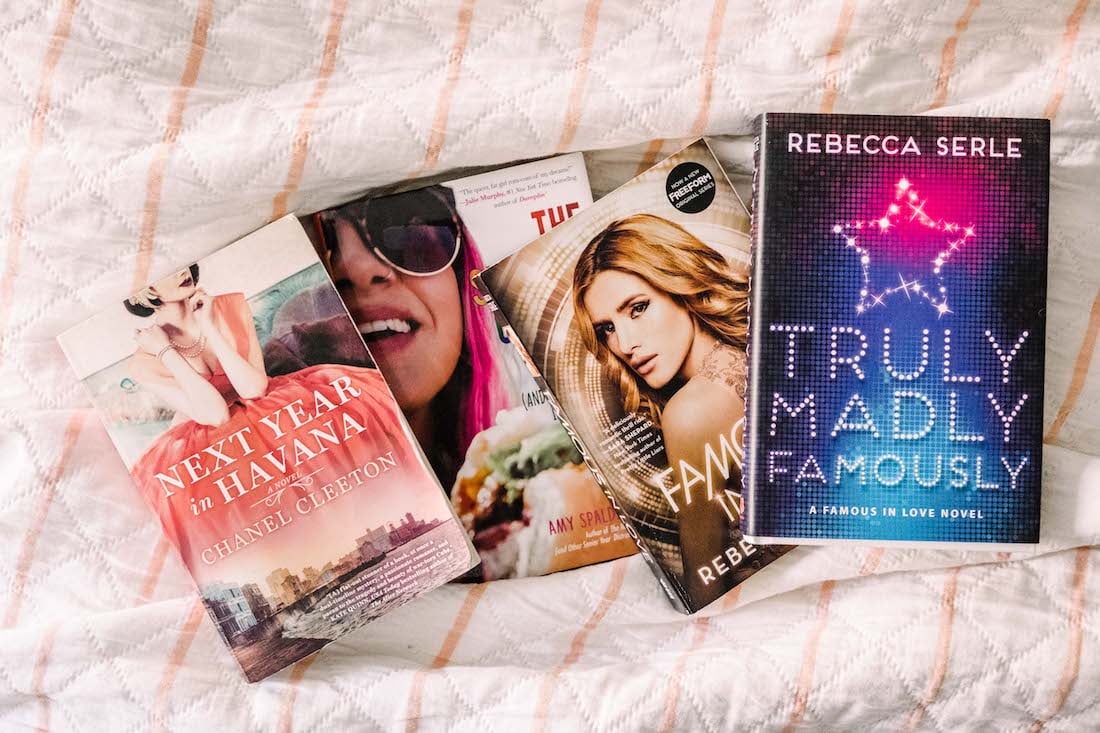 Disclosure: I received advanced copies of The Summer of Jordi Perez and All We Ever Wanted.