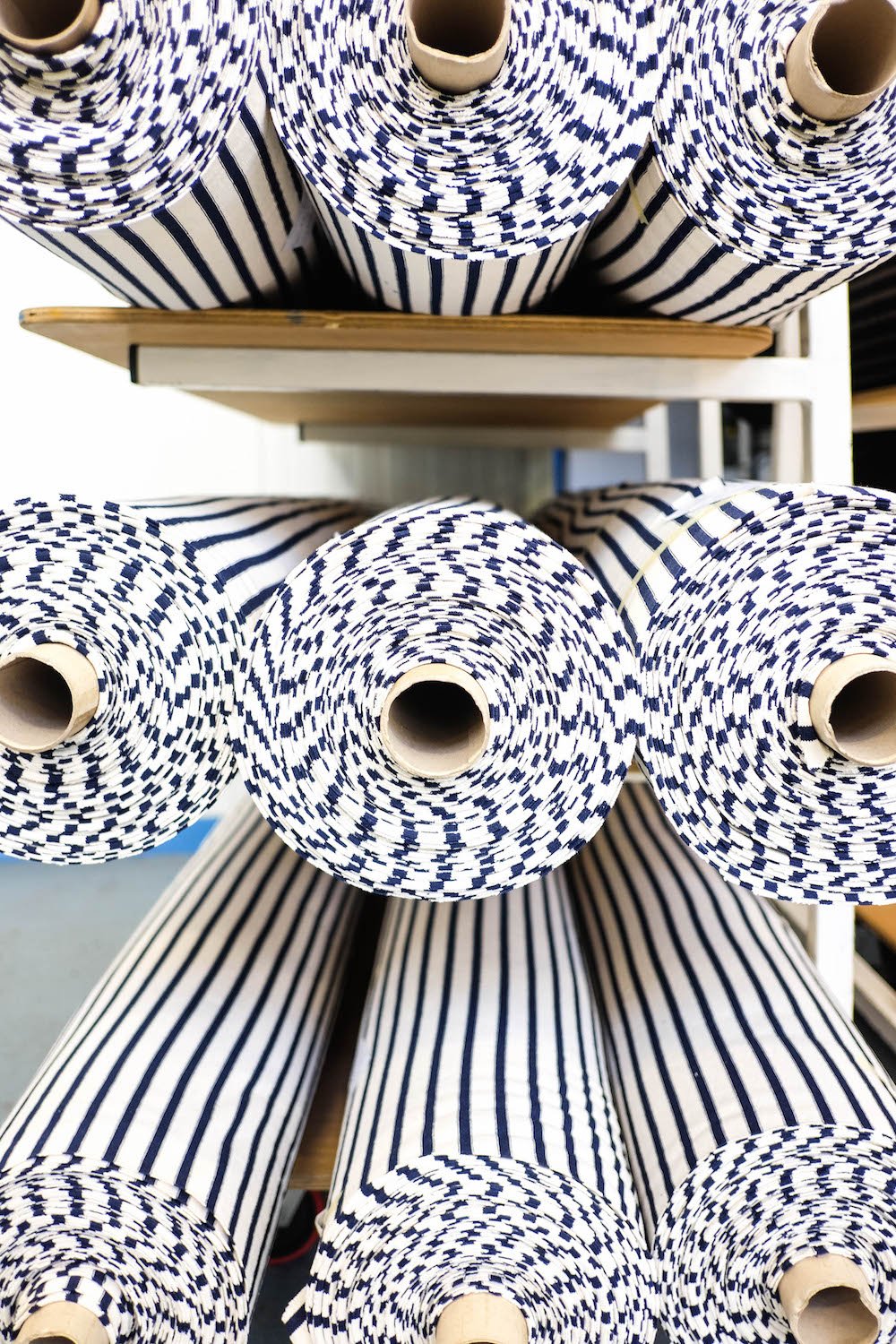 If you read here regularly, then you already know that I am completely obsessed with learning the behind-the-scenes of how things are made. So when Saint James (already my most favorite t-shirt) invited me on a road trip through France that would include a visit to their factory in Saint-James, I pretty much completely freaked out. The making of my favorite striped tee? Unreal.

Visiting the factory was such an incredible experience. It was amazing to get to learn so much about one of my absolute favorite brands. I also developed a fantastic understanding of the brand’s principals and commitment to quality + treating their workers with care and respect. So… let’s dive in. Before we do though, I really love the guide that Tuckernuck put together for Saint James. I stumbled upon it rather randomly the other night and they do such a great job breaking down all of the different fits + fabrics. If you are thinking of investing in one of their striped tees or dresses, that’s the place to do it! My personal favorite style is the Minquiers Moderne – it’s long and lean and really flattering. I love the Meridien Moderne as well, though… while it’s not quite as long in silhouette, it’s made from a heavier weight cotton… almost like a sweatshirt. 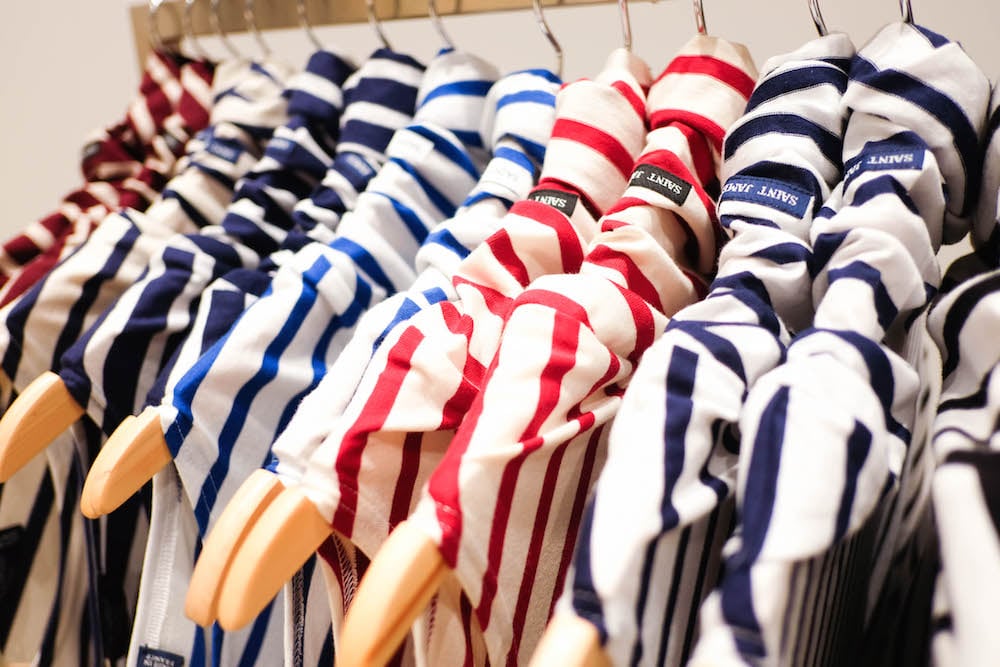 So. What if I told you that Saint James is the Hermes or Louis Vuitton of t-shirts? You’d probably laugh at me and say… “Grace, clearly you’ve been on a press trip and are drinking a little too much Kool-Aid.” But hear me out. Like Hermes (whose heritage is in equestrian leather) and Louis Vuitton (which originally began by producing quality trunks), one of Saint James’ core values is the idea of function before fashion. After all, the brand’s DNA is based upon creating purely functional workwear for the local fisherman.

I think it’s best to talk first about the history of the brand, and then about the process in which our favorite stripes are made. Saint James began back in in 1850… dyeing and weaving wool from the local village. It really all began with producing the sailor’s sweater. The local sailors traveled as far as Newfoundland and needed something warm and waterproof. The sweaters were made from tightly knit wool that had only been slightly de-greased, resulting in a sweater that was… almost waterproof. And the wool was dyed using Indigo, which, I learned, is one of the only shades that is resistant to sea air.

Meanwhile, the striped tee we all know and love became a standard part of all French navy sailors’ uniform after an 1858 decree. There had to be 21 white stripes and 20-21 blue stripes… at a perfect 2-1 ration (20mm to 10mm). The sleeves had 15 white stripes and 14-15 blue stripes at the same ratio. Quite specific! It was said that the French military was known as the best-dressed… but not necessarily the most efficient. 🙂 It is said that the 21 stripes represented each of Napoleon’s naval victories over the British fleet.

It’s interesting to note that back then, even the t-shirts were made from wool. It was not until 1980 that the brand would begin working with cotton and other fabrics. 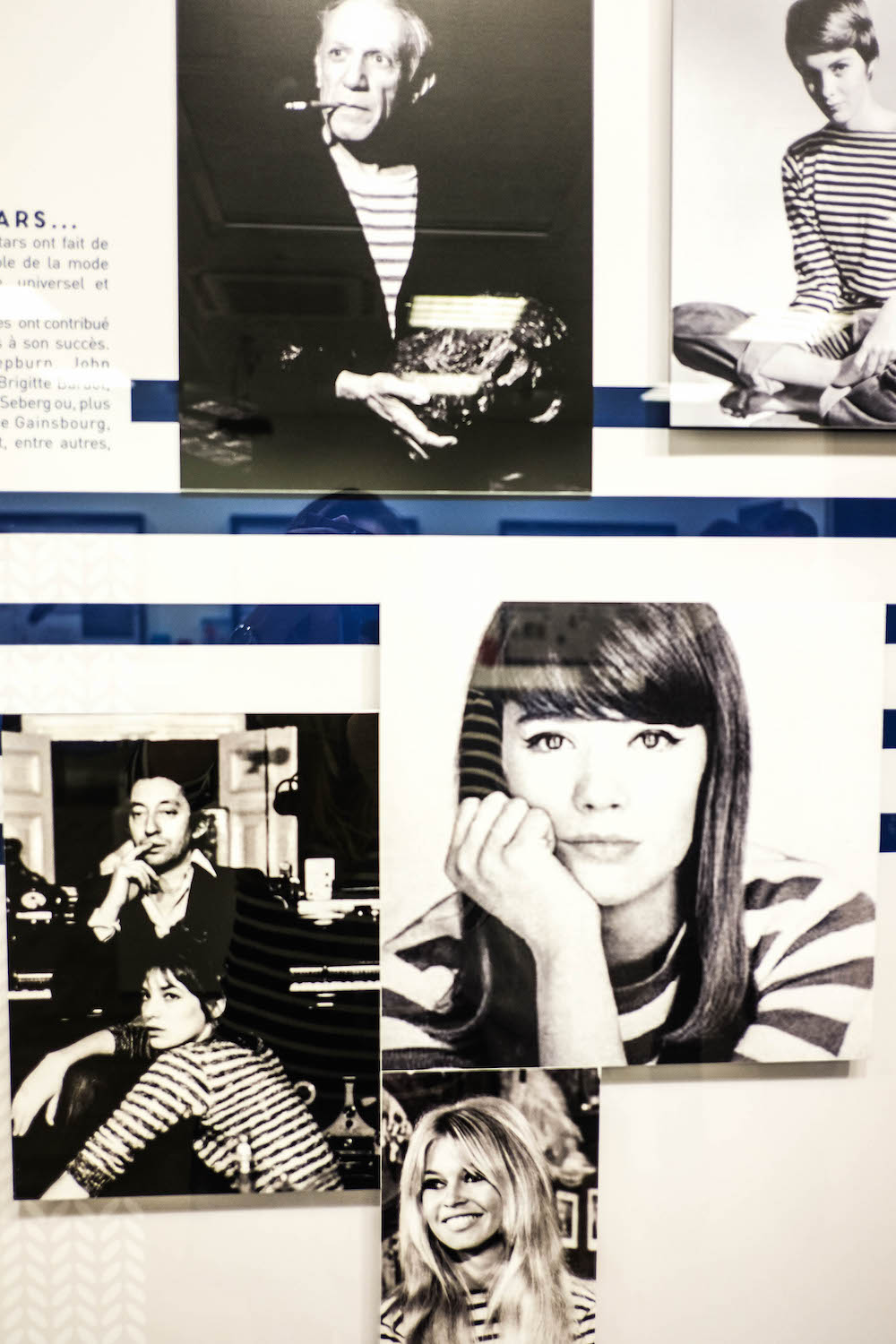 The brand owes an awful lot to Coco Chanel. In 1917 she turned the fisherman’s striped sweaters into a fashion statement.. selling them at her boutique and making them the shirt to sport on a seaside vacation in France. Since then, the brand has developed a massive celebrity/designer following. Saint Laurent, Gaultier, Karl Lagerfeld, Audrey Hepburn, Brigitte Bardot… even Picasso! 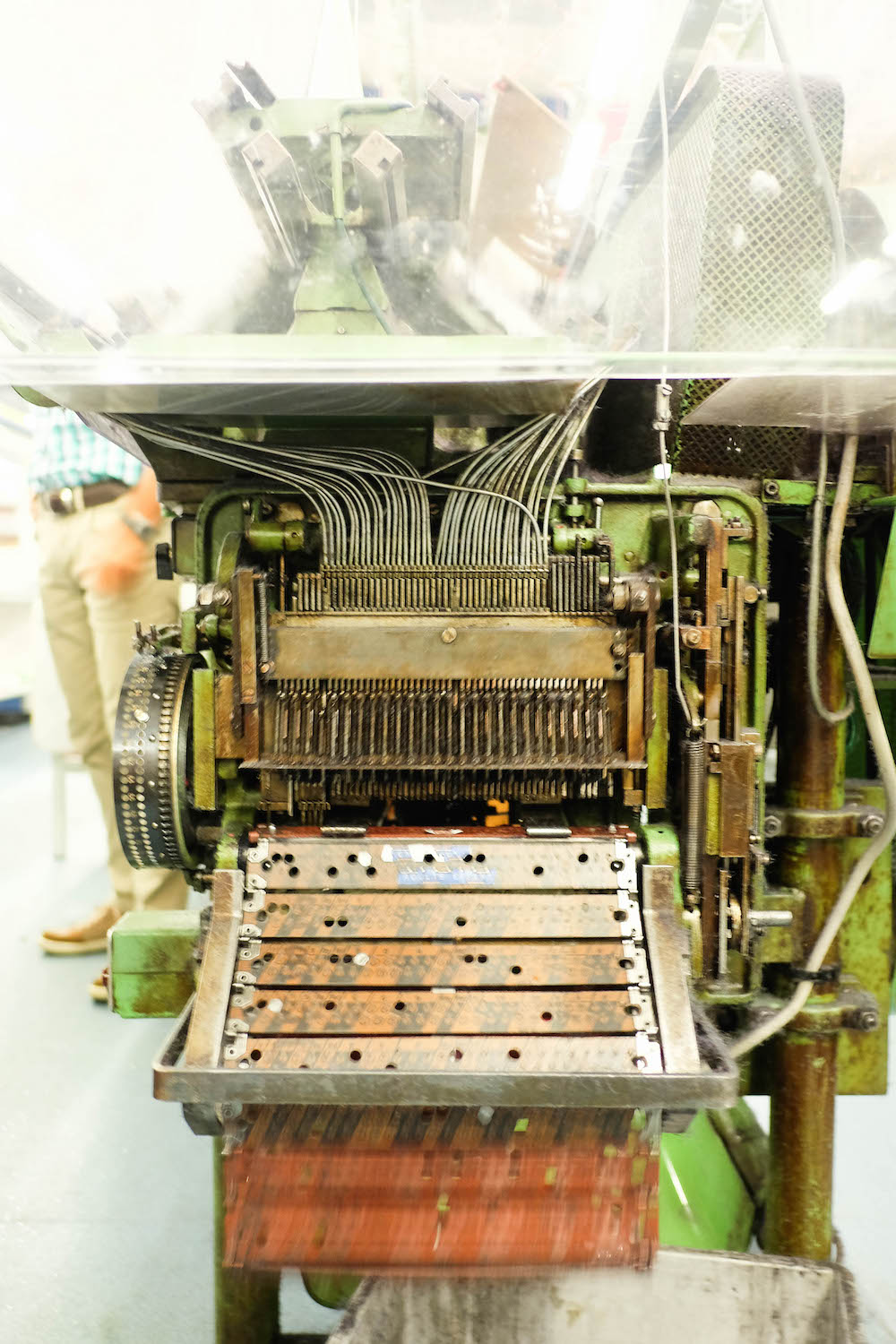 Every single Saint James striped tee and sweater that you ever will see and/or come into contact with is produced in their Normandy factory. The factory has 75 knitting machines (valued at $100k each!!) and 300 employees. The factory workers are artisans… the training process (depending upon the role) takes 2-5 years.

I found it really interesting that the factory must very carefully regulate both the temperature, along with the humidity. Wool is a living, breathing material and can change shape if the temperature isn’t properly controlled.

Pictured above is one of the brand’s older machines. The punch plates you see control the weave. Most of the machines in the factory today are controlled by computer program. We were taken to a room of computers and met with one of the brand’s engineers… it was fascinating to see how the design team will pass a sketch along to him and from there he will actually develop the knit via computer programming. It takes about two days to optimize and program a machine and build the program. 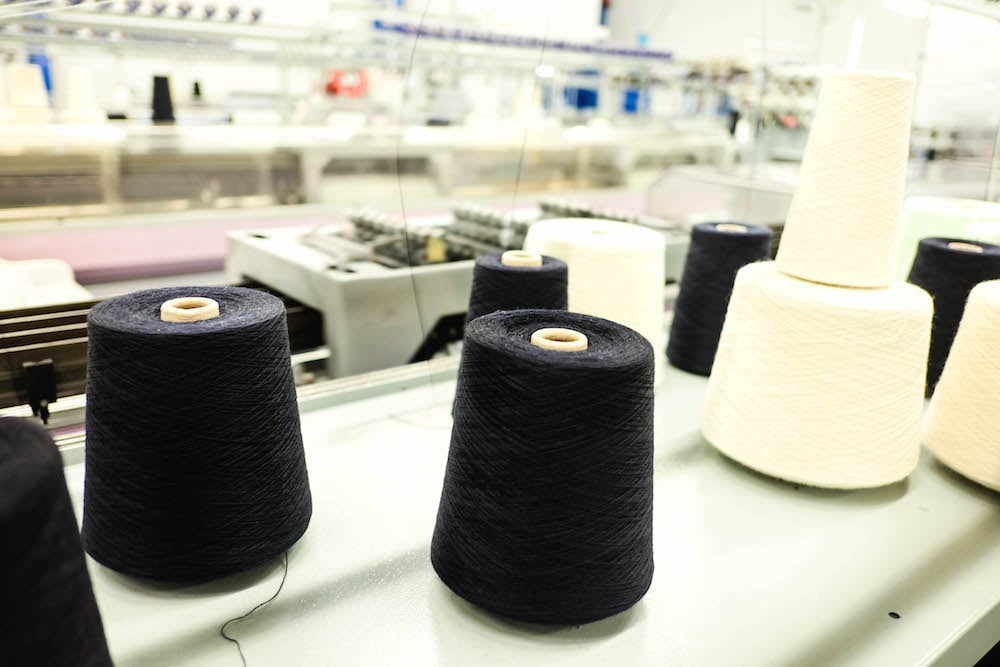 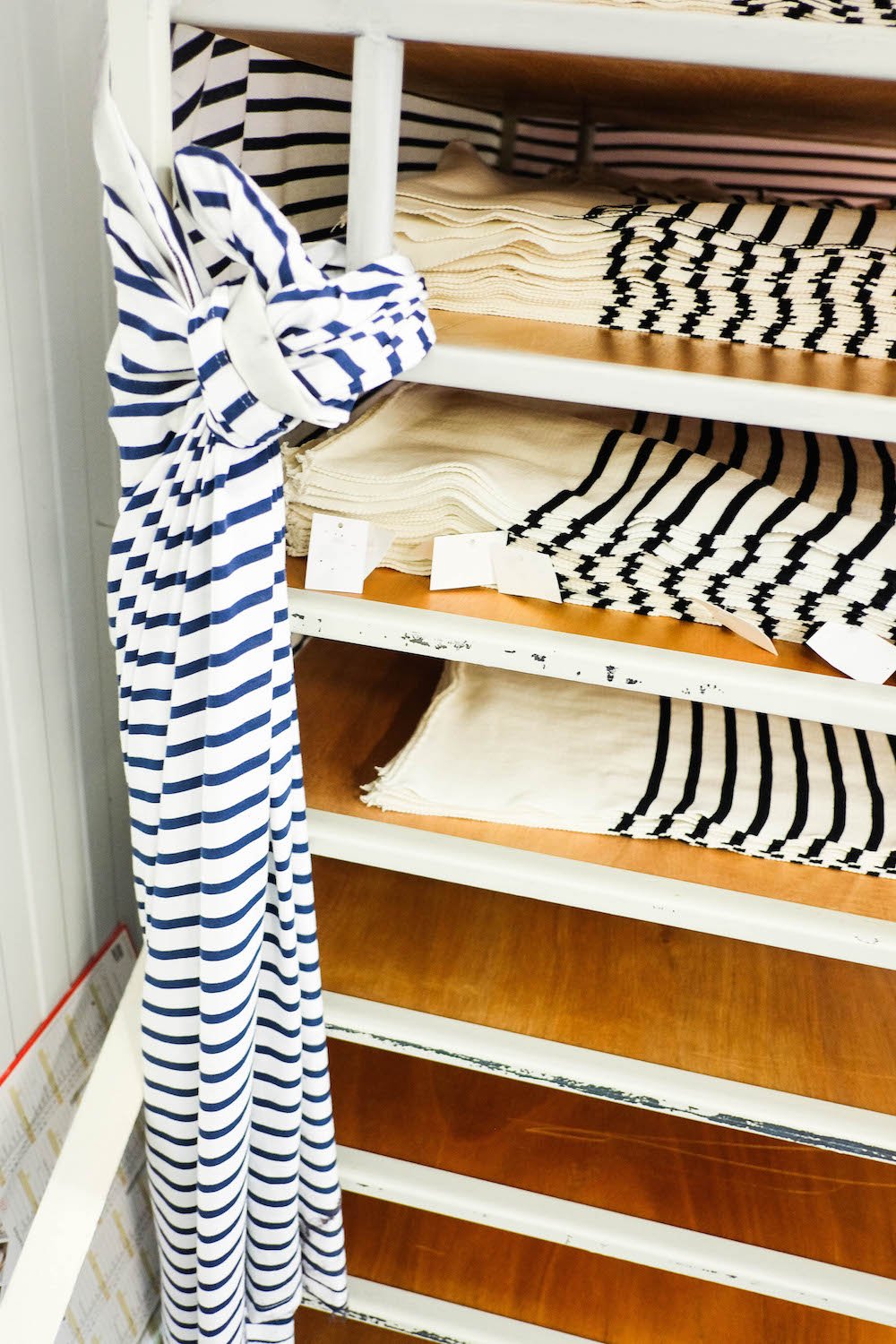 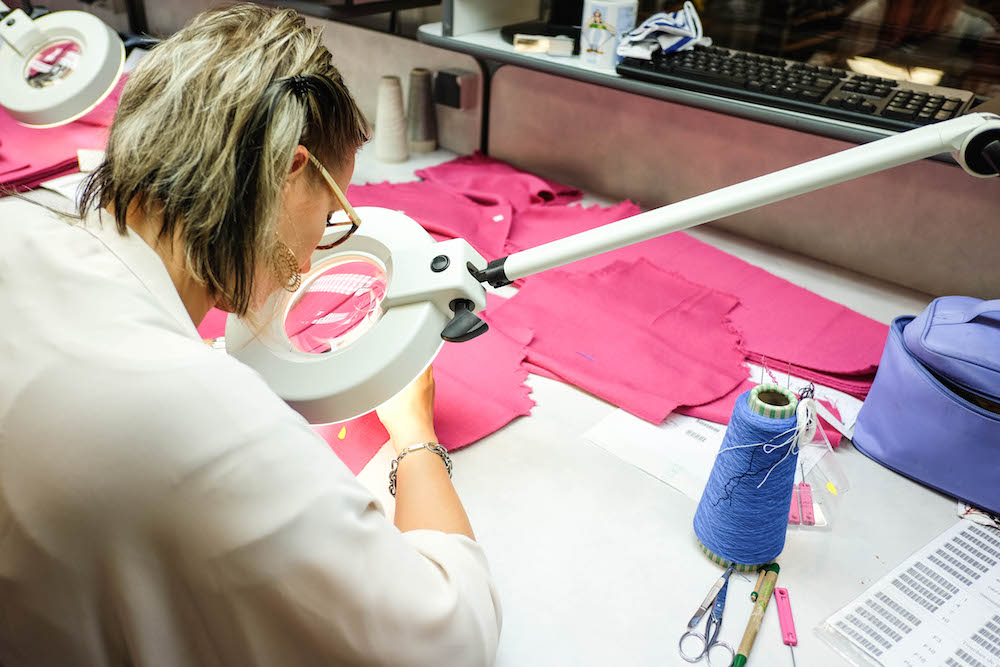 Quality control is massively important to Saint James. The brand’s repair process is called Raccoutrage. It requires such focus and attention to detail that anyone on the 10 person team must go through two years of training first! Because of this, Saint James was awarded EPV status by the French government – a massive honor in France… only 43 ready-to-wear and haute-couture brands have earned it! The raccoutreuses remove impurities (bits of straw, broken needles), and repair any flaws (slipped stitches, pulls, or holes). 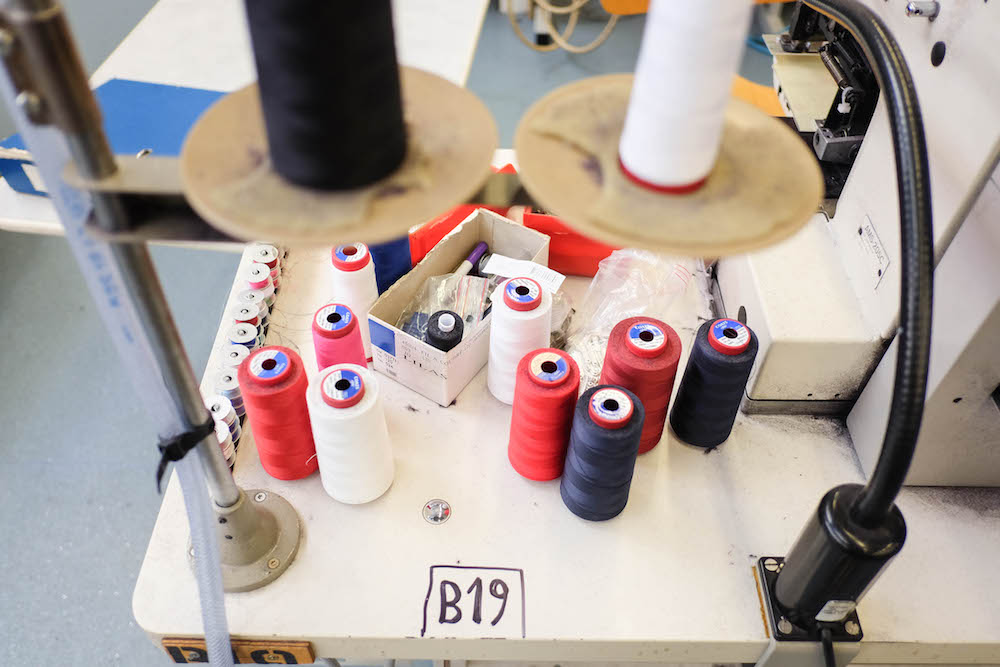 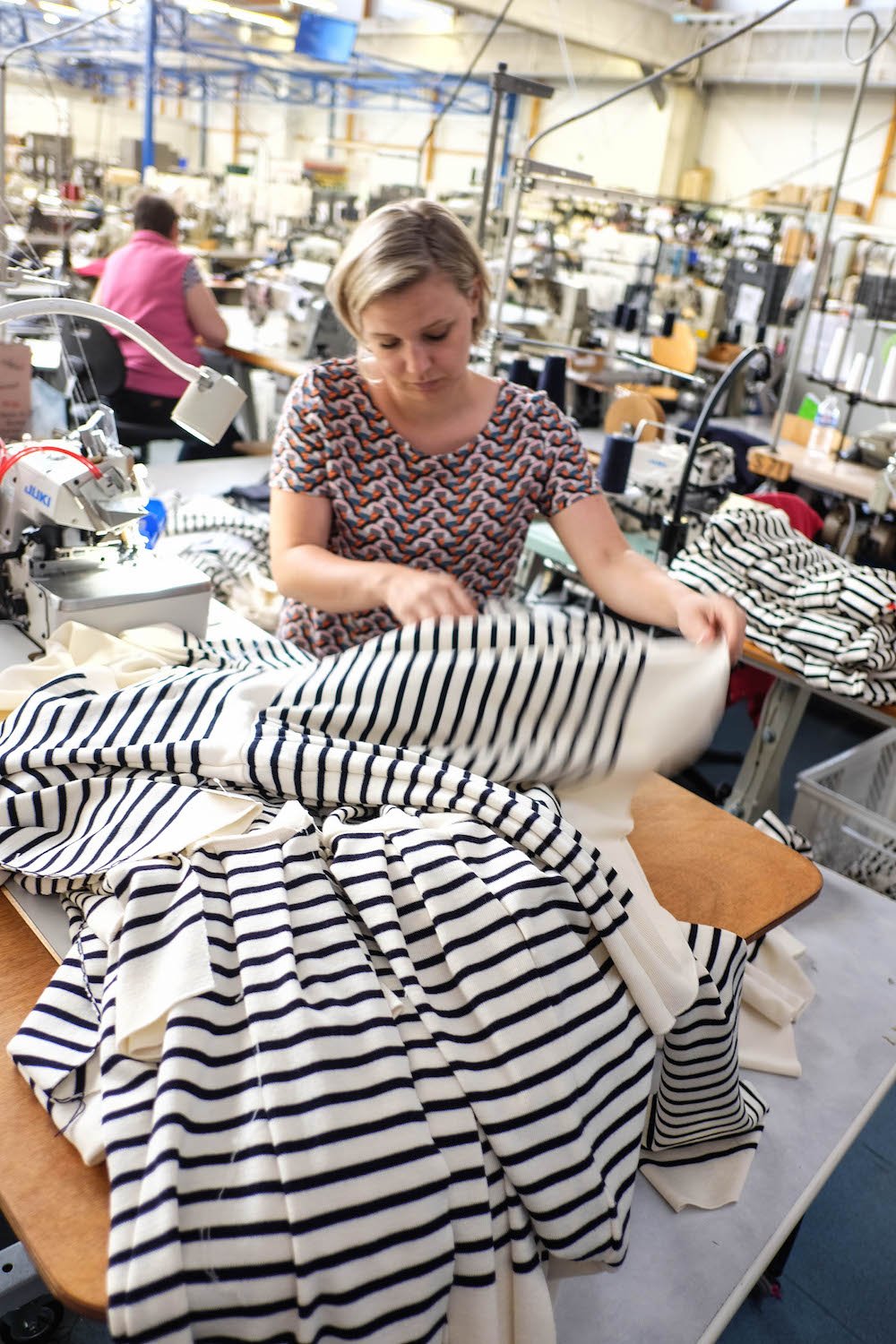 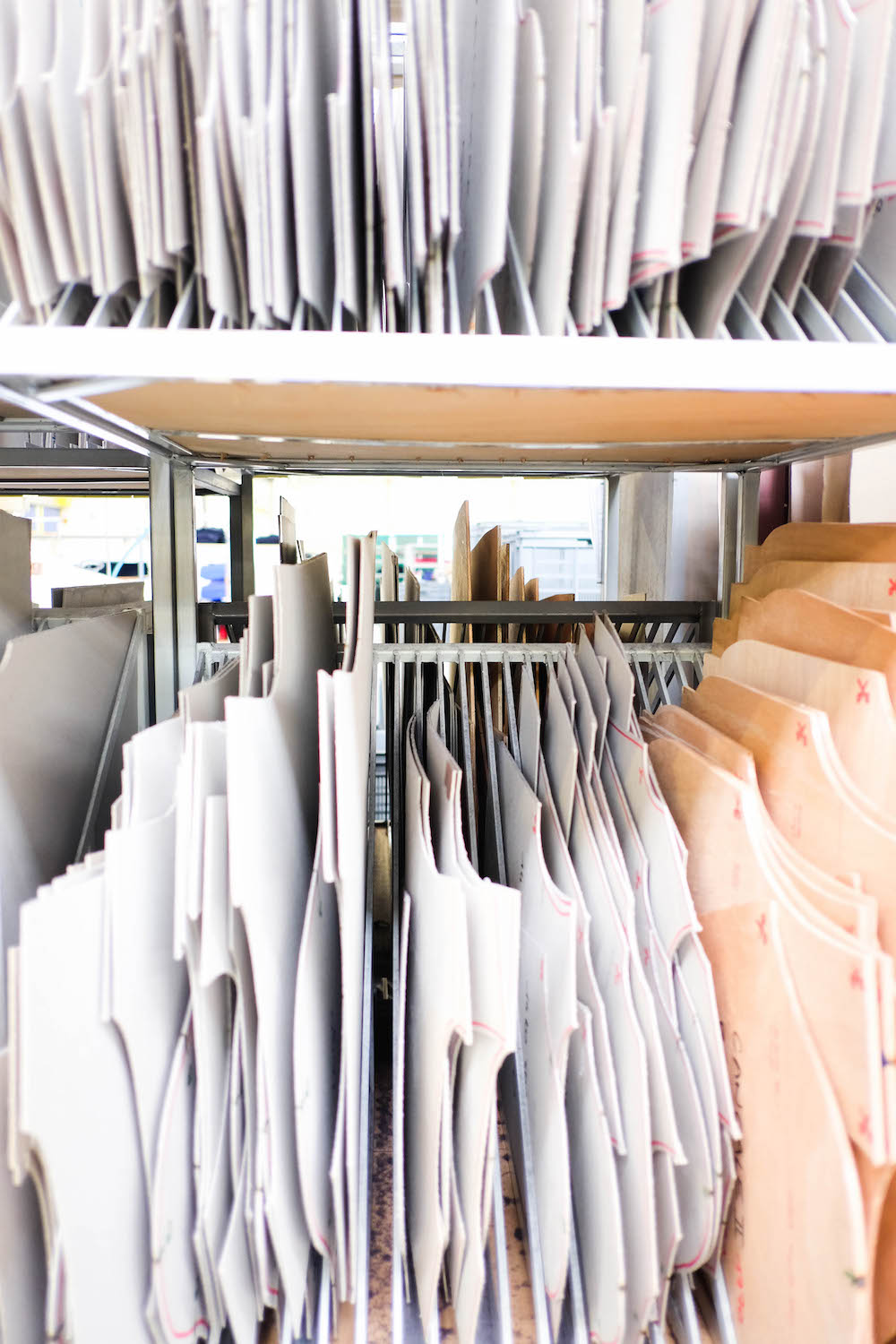 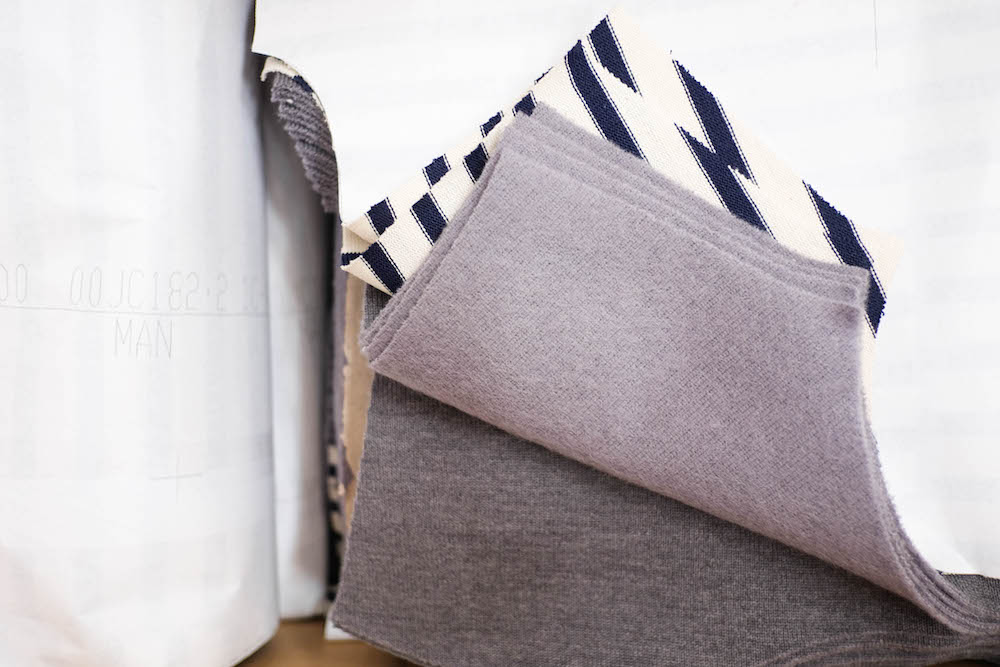 Thank you to Saint James for an incredibly memorable trip + factory visit. I’ll be sharing more from our trip this week… including what I wore + packed, and a longer diary from our four day adventure complete with everything we did and where we stayed. In the meantime, you can also read the quick diary I put together for The Daily!