Spring is coming, and thanks to Chanel, before you know it, everyone will be rocking neon yellow nails.  I highly recommend stocking up on Sally Hansen Salon Effects in Electric Shock the next time you’re at the drugstore.  They will give you the most opaque, shiniest, and longest wearing neon nail color possible.  (Trust me on this one, I spent a little over a year as the marketing manager for Sally Hansen nail color… I worked on this launch and I know my nail polish.)

In the meantime, I think I may have found the perfect interim color from Ginger & Liz.  It’s called “He’s So Into Me.” 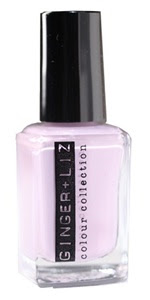 At first glance,  it looks nearly white, but two-three coats later, you have perfectly lavender nails.  It’s pale enough to give you visions of Spring as you look at your nails, but the color is rich enough to warm up pasty hands.

I hadn’t tried Ginger & Liz yet, but can see myself becoming a huge fan.  Have had it on for three days now (no top coat, and not even a sign of chipping or tipping.)  The formula is borderline Zoya (as in super long-wearing) good.