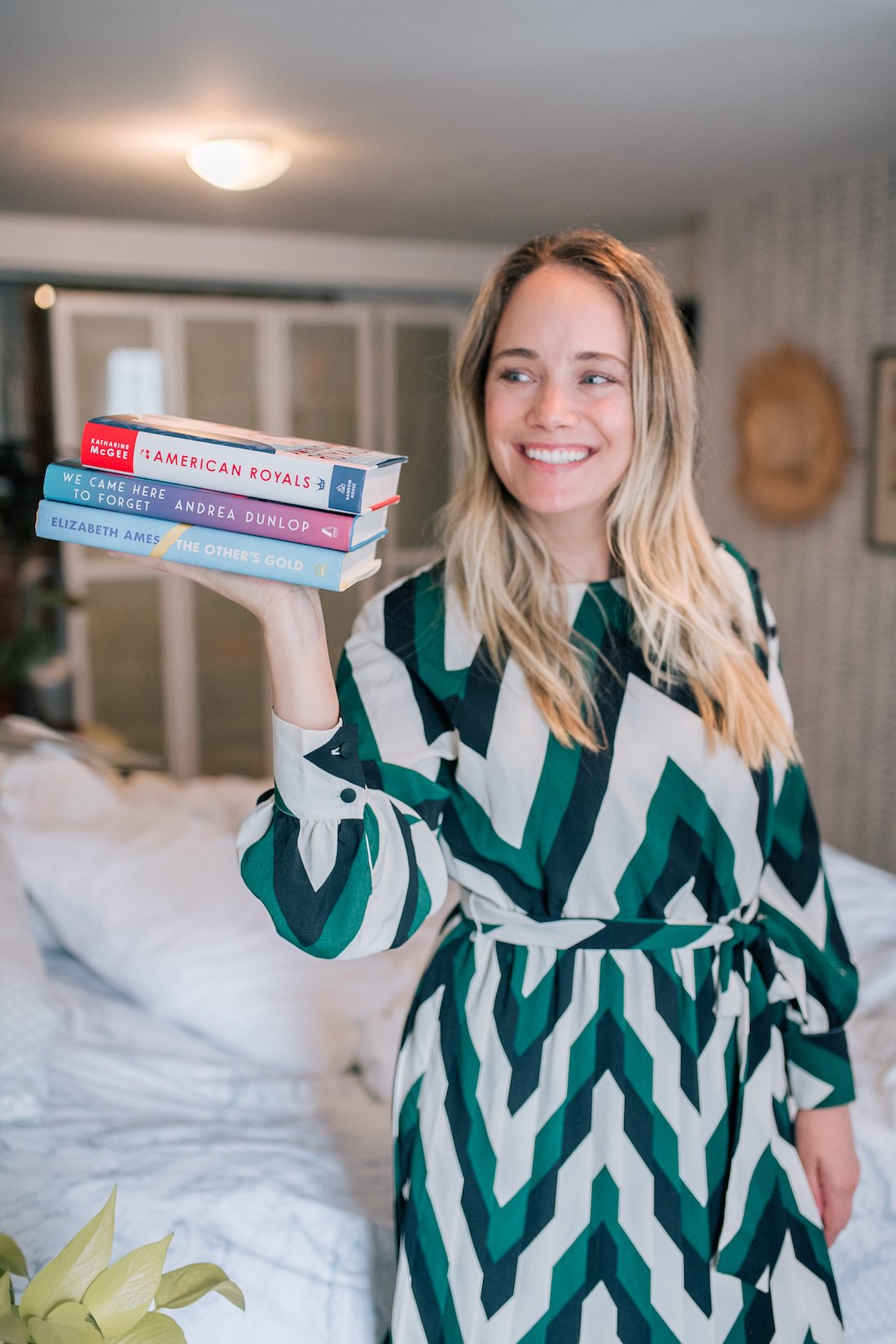 This month started medium and then got better. I got REALLY sucked into the Luxe series, and while I don’t regret the time I spent reading those books when I finished, I was kind of like, “What did I just do with my time!?” But sometimes you just need a series like that. It scratched an itch, that’s for sure. A real highlight for me was We Came Here to Forget. I can’t stop thinking about it! It literally kept me up ALL NIGHT.  Can’t recommend it enough! Anywho. I read 10 books this month. But 4 were trash. Good trash, but still… trash!

I’m always looking for great recommendations… tell me what you’ve been reading in the comments! We’re also trying to figure out our October, November, + December books for the podcast… if you have suggestions, let us know!

Every month I update it with everything I read – it includes every.single.book I’ve read in the past few years. The best part is that you can filter + search by genre (memoir, light read, historical fiction, thriller, etc!) to find exactly what you’re looking for. I always add whatever it is that I’m currently reading in real-time to my Amazon Shop. If you’re feeling like you need even more book recs, check out last month’s list. I also posted a roundup of the 10 best beach reads of all time (in my opinion) if you’re looking for something fun and light to read.

For all my fellow Anna Delvey Obsessees! 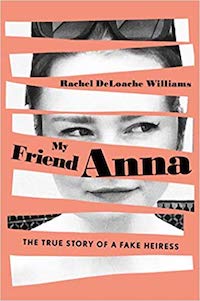 If you listen to the podcast or know me at all, you know that both Becca and I are OBSESSED with all things Anna Delvey. So naturally, we both freaked out a bit when we heard about this book, written by one of Anna’s closest friends during her peak faux-socialite heyday.

It details everything – from how they met to how Anna eventually scammed Rachel… the rise and fall of their friendship. Fancy lunches and dinners at Le Coucou, her time at 11 Howard, a crazy adventure to Morocco (where Rachel was forced to pay the huge bill). I felt myself feeling incredible amounts of secondhand financial anxiety for Williams. It was juicy though. I wanted to learn more about Anna and her scams, and I did. There is exact text message conversations. It’s definitely a fun read. It is not very well-written which can detract from the book at times, but overall I REALLY enjoyed it.

The Luxe, Rumors, Envy, and Splendor by Anna Godbersen

Oh my god. So I read four books in a one week period (possibly shorter than that, I wasn’t keeping track) and I am a little bit mortified? The Luxe series is just so fun. It really sucks you in – if I had to describe it, it would be Gossip Girl, set in 1899! A strange concept, for sure but picture Blair and Serena in ballgowns and arranged marriages and you kinda have the jist. It starts with the first book, which introduces you to sisters Elizabeth and Diana Holland. The Holland sisters kind of rule Manhattan, alongside Penelope Hayes who is Elizabeth’s best frienemy.

The Holland family has come under hard times so Elizabeth is forced to marry the dreamy Henry Schoonmaker who everyone adores except her. Meanwhile, he’s dating Penelope and secretly in love with Diana. So just imagine. The series follows them through marriages and deaths and a lot of drama. These books are not very well written, they’re kind of predictable, but if you’re craving something fun and easy that will take you away from your life for a whole weekend, these books will scratch that itch. ENJOY. The best book is the last one – if you’re doing this, just go and order all four at once! 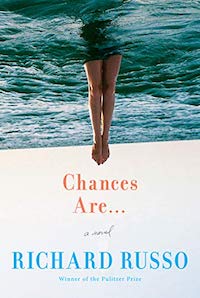 Chances Are by Richard Russo

This one was a departure for me as it’s about three older men! You might have heard the news that Carly is going to be our October books guest (so excited!) for the podcast so we’re in book selecting mode. This one was on her radar and I loved the idea of reading something from a totally different perspective AND it is set on Martha’s Vineyard. This is the story of three men (all good friends since college in the sixties and all very different!) What unites them is their college friendship (they were all the poorer kids at a wealthy liberal arts school in Connecticut and met serving food at a sorority house.

What also unites them is that they were all in love with free spirited Jacy Calloway, who disappeared from the island in 1971, never to be seen again. As the friends reconnect more than 40 years later, they can’t help but wonder what happened to her and what secrets they’re keeping from each other. It’s funny, it’s surprising, and it’s definitely very different from anything else I’ve read recently. This isn’t going to be our October book, but I really enjoyed it. The first half is very slow and then it really picks up. There’s a mystery of course, but there’s also these very real vulnerable characters and their friendship. 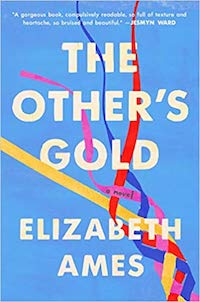 The Other’s Gold, by Elizabeth Ames

Okay, honestly… I am still processing this book, weeks later! It went really off the rails but I still enjoyed it. This book just came out on 8/27 and absolutely everyone is talking about it. It follows four girls (Lainey, Ji Sun, Margaret, and Alice) from day one of college (they’re thrown together as roommates) through adulthood. The girls become the best of friends and the book follows them each as they make the worst mistakes of their lives.

The first two mistakes were innocent enough (still bad) but the second two get a bit dark. Both Becca and I were kind of like WAIT WHAT JUST HAPPENED!? I still enjoyed the book. As I said above, I’m processing and I think about it a lot. But I love when a book makes you think like this. I loved the real look at female friendships (it was similar to How Could She? in that regard). The characters are complex. The stories are complex. Their mistakes are… intense. But overall I really enjoyed the book and I really enjoyed how well the author captured the intricacies of female friendship. Read it with your girlfriends; it will definitely give you something to talk about!!!

We Came Here to Forget 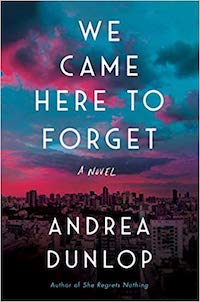 Okay before we dive in, I’ve been asked to provide trigger warnings with my book reviews. If you’re pregnant or have a small child this book may be problematic for you. I can’t say much more than that without revealing too much/providing spoilers Now that we have that out of the way, this book kept me up ALL NIGHT. Literally. I read it til past midnight and then woke up at 6am to read if and finish it. I literally read this book in a twelve hour period. It was that gripping.

It’s Katie Cleary’s dream to become a gold medalist skier. And she’s on track to do that; leaving home as a teenager to train with her boyfriend and best friend, winning race after race and eventually making the US team. And then everything unravels as a terrible, gruesome secret about her sister comes out in the media completely derailing everything – her career, her relationships, etc.  She flees Park City for Buenos Aires where she starts her life over as Liz Sullivan. It is there that she befriends a group of vibrant expats and begins to rebuild her life. The book alternates between Katie’s childhood + college/growing up with her sister to modern day until the two catch up. I just needed to know what happened.

It was really intense. But I couldn’t put it down. I really loved it. Just know that it is pretty intense. It’s the first book that has kept me up like that in a while! 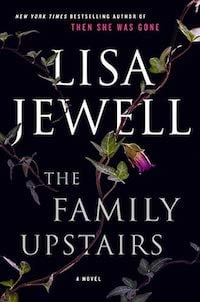 I’m such a big fan of Lisa Jewell. Her books always leave me thinking for days after. And they’re SUPER dark and disturbing which is something I happen to really enjoy (lol). I still think about Then She Was Gone quite a bit… it was super messed up and dark. This book centers around estranged siblings Libby, Lucy, and Henry and their friends Phin and Clemency. Back on the eighties, their parents are found dead in their beautiful English mansion. By all accounts, it looks like they had formed a cult and they’d committed suicide. Henry and Lucy were teenagers and disappeared, while Lucy was a baby – abandoned on the scene. Twenty five years later, Lucy has had her birthday and is set to inherit everything (the home is worth millions). Her birthday brings the family members out of the woodwork and a mystery unravels. It alternates between their (very creepy and disturbing) childhood and modern day. I could not put this one down and highly recommend it. It’s not out until 11/5 but I’d recommend preordering it. You will be in for a (dark!!) treat when it arrives! 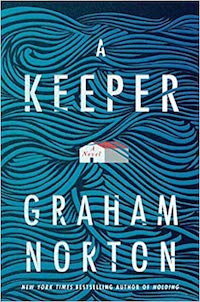 A Keeper by Graham Norton.

I will be honest – I wasn’t all that sure how I was going to feel about this book. We have Graham coming on the podcast this month and I wanted to read his new book before we met him. Obviously Graham is amazing – but I wasn’t entirely sure how he’d be as a writer. I’m here to tell you that it was SO good! I can’t decide whether to classify it as a thriller or as literary fiction, as it’s kind of a nice mix of both! Elizabeth Keane is a single mother living in New York who returns home to Ireland to sell her mother’s home after her recent passing. She never knew her father but while she’s cleaning, she discovers a bundle of letters he’d written to her mother.

The book circles back and forth between modern day (Elizabeth trying to figure out what the hell happened), and the past (as Patricia meets Elizabeth’s father and the terrifying series of events that happen). I am being vague but it’s intentional… Because I don’t want to spoil it for you! I read this one in a full day this past weekend and loved it so so much. Also, I was really impressed by a) Norton’s understanding of human nature (and our worst tendencies) and b) ability to write from the perspective of a woman!