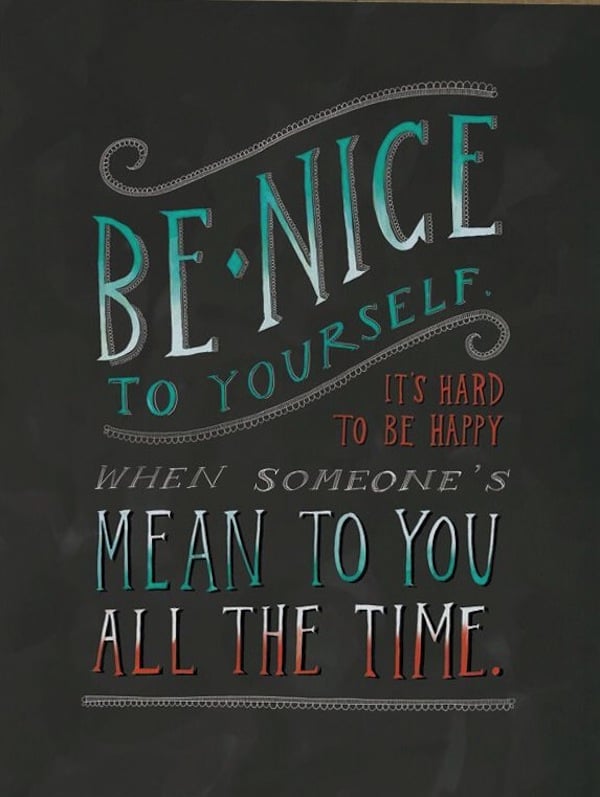 Today’s post has been on my mind for a long time.  Truthfully, I’ve had this post saved in my “drafts” folder for months  now, but haven’t had the courage to actually hit publish.  But lately I’ve had this weird gnawing feeling inside me, saying that I should just do it.  So here goes.

You guys.  We really, really need to be kinder to ourselves, and to each other.  Especially as women.  We need to be mindful about how we talk to other women, how we talk about other women; and the way we talk about our bodies.  I was really inspired, recently, by Jennifer Lawrence’s interview where she suggested that calling someone fat should be illegal.  (Her interview has since been taken out of context; she was referring to the media – not everyone.)  The other thing that motivated me to write this is a website called Return of Kings.  They have posts with titles like “5 Reasons Why You Should Date a Girl With An Eating Disorder.”  I spent probably too long on their site, getting more and more disgusted and angry by the minute.

This is not meant to be a fluffy post, something you’d read in Glamour or see in a Dove commercial.  “Love your body, love your life!”  It’s about treating ourselves a little better.  Being nicer to other people, being better to yourself.  When someone pays you a compliment, not saying “Oh but I look so fat in this.”  I may just be talking to myself here but I say that stuff all the time.  One of my goals is simple but a little hard – to just say thank you when someone says something nice to me.

It’s different for everyone, but we all have our little things… insecurities and hangups.  A little over a year ago one of my (now ex) boyfriend’s friends took to my Facebook wall, late at night.  I knew this guy didn’t like me, and he was pretty drunk, but I was horrified but what he wrote.  He said a slew of nasty things, and called me fat.  (Yes you read this correctly – on my Facebook wall.  And yes, we are in our thirties.)  Of course the thing I fixated upon most was the fat part.  It was so stupid but so terrible, and it made me feel like total + complete shit.  I felt hideous and disgusting and remember standing in front of the mirror and crying.  It was really awful.

Time heals everything, but truthfully, it probably took until my boyfriend and I broke up this past summer to really be totally over it.  After the breakup, I got really selfish.  One of the things that probably helped the most was that I only spent time with people who left me feeling good.  As time went by, I started to get my self-confidence back.   I was having fun again, and living more in the moment (and worrying less about what everyone else thought.)  I’m not sure when, but at some point I woke up and just felt better, stronger, good.  And when that happened, I kinda just gave anyone who was mean to me while we were together a big eff you (at least in my head.)

But this post is not about what happened to me.  Honestly, every girl I know seems to have a terrible memory of her body being made fun of – whether too fat or too skinny, at least at some point in her life.  I told you this to show you how those words made me feel.

The sad thing is that whenever I tell another girl this story, like I mentioned before, she usually has a similar story.  Recently I was at dinner with a new friend when she told me that her ex-boyfriend told her that she could stand to drop 50 pounds.  He said this to her on New Years Eve.  (Again… who does that!?)  Though it is irrelevant to my message here, this girl is teeny-tiny.  If she lost 50 pounds she would literally die.  Why anyone would ever say that to her blows my mind.

But these guys aside, I hear it from girls too, which is frustrating and honestly even more disturbing.  I just feel like we should be better to each other than that, and hold each other to a higher standard.  I was out with a big group of girls a few months ago, and the wine was flowing… there was a girl that had done something not so nice to a friend of mine, and another girl piped in, saying… “Oh, well she’s just a sad fat girl… that’s why she did it.”  She meant well (to make the other girl feel better), but the fat part made me cringe, a lot. Oof.

I guess the key takeaways here (sorry for the business talk here… after spending 4 years at P&G I’m prone to summaries) are as follows:

To end, I’ll just say that if someone is trying to tear you down, they probably have their own set of problems.  Remember that, too… happy people don’t say that stuff.  They just don’t.  (And to the five guys that read this blog, just be better and remember that your words have consequences.)

End rant!  If you made it this far, thank you for reading… I really hope that you take this post to heart.