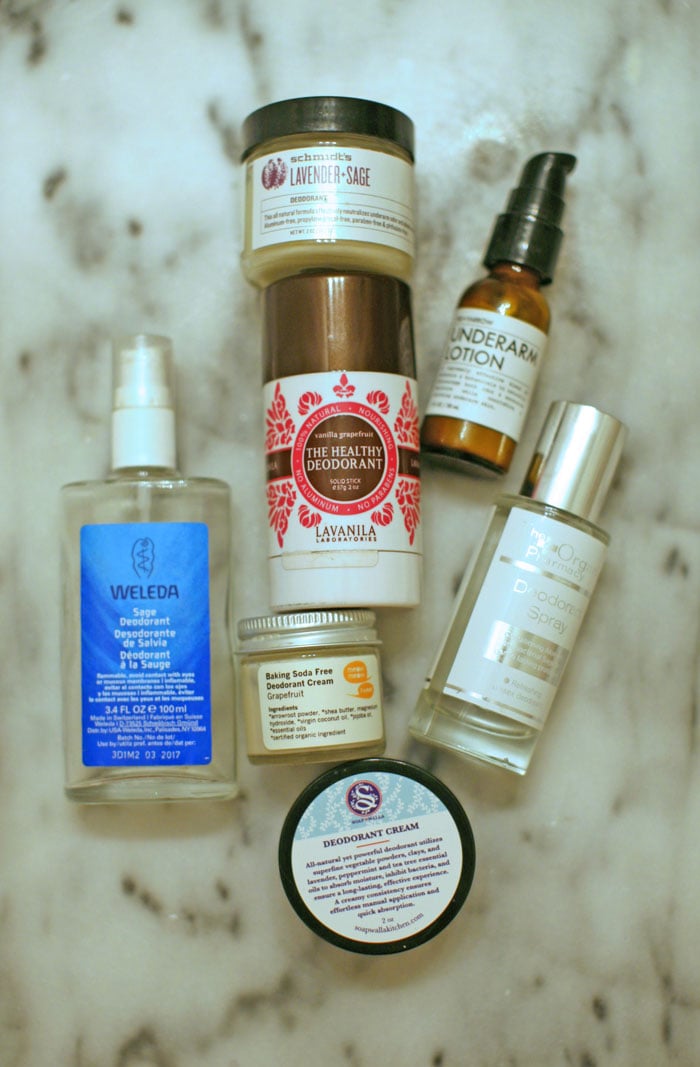 Sometimes, in the name of blogging, we take one for the team. In this case, it was me… trying all of the natural deodorants. Get ready for a long post because like guys, I’ve been working on this post since mid-summer and have tried all of the things.

Oh man. If you’ve been on the pursuit to find a great natural deodorant, you know what I’m talking about. There’s always something wrong. Whether it’s the formula (I’m so not into putting deodorant on with my fingers) fragrance (many of them have a decidedly herbal scent), or actual performance (the Lavanila one smells so good but you really need to reapply throughout the day) there is no perfect formula.

For fun, let’s start talk about what didn’t work. The crystal. Has anyone tried the crystal? It does not work. I have never smelled worse. The crystal has this cult following which I just do not understand. It does not actually do anything in particular to a) stop sweating or b) make you smell good. I’m seriously at a loss here, so if anyone has any insights about the crystal I’d love to hear them. Maybe I did something wrong! Also on the did-not-work list: Toms of Maine. I really wanted to love it because I’m a fan of the brand and love their toothpastes, but no. It does not work. It smells lovely, like honeysuckle… but does nothing. And I’d heard so many good things about I Love My Armpits’ deodorant, but I actually hated it. It felt like rubbing smelly green clay under my arms and within a few hours I smelled like a disgusting mix of herbs and B.O. Gross.

Now that we’ve gotten that out of the way, let’s talk about what I actually liked:

Lavanila’s deodorants smell amazing. Better than any of the others. And (major bonus points), you apply it just like regular deodorant. I love all of the scents (especially the lavender vanilla.) That said, you will need to reapply. If I’m wearing this one, I usually apply in the morning, after work, and then again before bed. So… that’s a bit of a commitment. But if you are cool with reapplying, you get to smell really nice and apply your deodorant without using your fingers.

Next up: the cream/jar formulas. I tried a lot of these… this is the most popular natural deodorant formula, but there were three that I really liked. And with all three of these, they fit the bill in that I’d apply in the morning after showering and still smell good climbing into bed.

A lot of natural deodorants also come in a spray formula.

We’ll save the best for the last, and the best of the best in my opinion was Fig & Yarrow’s Underarm Lotion. This formula is different than the others in that it’s in a small pump bottle (which looks very lovely on your vanity, I might add.) The formula is more viscous than the others, in that it’s more of a creamy liquid. I’ll apply one pump to each underarm and call it a day. The scent is not my favorite, but it’s the most effective and the easiest to apply so it wins, in my book! It’s on sale right now, so I really hope they are not discontinuing it!

PS – Since I know you’ll ask… if I’m working out, it’s Soapwalla or Fig & Yarrow. Always. The others are great for everyday use, but won’t necessarily stand up to an intense spin class.

The bottom line is that none of these products are perfect, and you have to make concessions based upon your priority (ease of application, scent, etc…) but there are still some products that work really, really well. I won’t go into the reasons you need a natural deodorant (I’ve heard people get all up in arms about this) and I do wear regular deodorant from time to time… but I almost always use natural deodorant. If you’ve found one you love, I’d love to hear it in the comments!