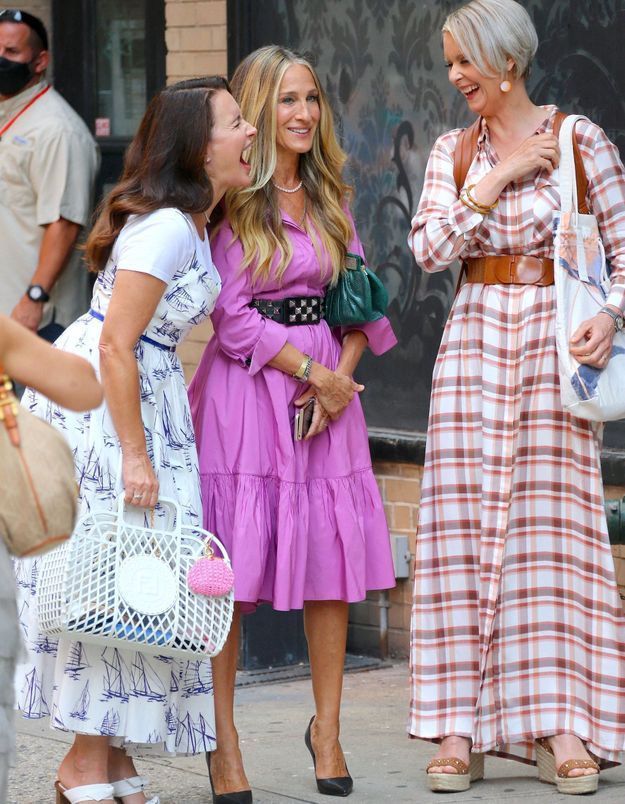 Warning: This has spoilers for And Just Like That.

Gah, this show. Earlier in the week I had this whole post planned about how we needed to be patient, to give it a shot and see where it goes. A lot of people are mad, which I understand. (And understand even more after the third episode). But sometimes I feel like we have this collective need to be angry and pile on, without giving something a chance. My personal attitude has been, “well it’s just good to have these women together again, despite the depressing plot line(s).” I still kinda sorta feel this way but after watching the third episode last night I am losing hope while also just feeling like the writers have done the characters a little dirty.

I mean first we had THE death. I am conflicted on my feelings here. Big is the character I loved to hate. I found it incredibly frustrating that the writers had Carrie and Big end up together as it sent such a bad message to women – that the Mr. Big character will grow up and change and love you and be faithful, so just hold out hope. I can assure you – the Big/Carrie sitch is the exception and not the rule. It should have been Aiden!

Despite my feelings there, did they really need to kill him?

With all we’ve been through in 2020 onward, this is not the show we need! Couldn’t we just get a show where we have these amazing women in their 50s thriving, having great sex, living their lives, killing it in their careers? I thought it was really interesting that in this interview, Chris Noth said, “All things end, and it was time for him to go, unless we’re gonna be doing Scenes From a Marriage, Sex and the City style. There was nowhere to go with it but six feet under.”

I guess I get it, but what a thing – to be so extremely excited for a show’s return only to spend the whole 45 minutes ugly crying. (And also: wondering why Carrie didn’t call 911?)

There has been absolutely no sex.

Sex has been replaced with loss, and we will continue to be so much loss in this show. Samantha. Big. And we know something bad is inevitable for Stanford’s storyline, as in real life the actor Willie Garson passed away this September in the middle of filming. I have heard that episode three was his last.

We also have to discuss Miranda. What’s become of her? I’m worried – she was always my favorite. The bumbling microagressions at school. The insensitivity about pronouns. I hate it? If any character on the show were going to mess up pronouns, she would have been my last pick. This article suggests that maybe her character is the only one that could handle it,  which makes sense when you think about it. Still. It’s been seventeen years since the original… couldn’t they have learned and grown during that time? Add to that a drinking problem (that no one seems to be paying attention to) and I hate it some more. I have hope though – it feels like maybe she will hit rock bottom and then they will take her character in a new direction… maybe she’s queer?

Of course there is the good.

I wish there were more shows about women in their fifties, proving that life doesn’t end in your thirties and that women can still be confident, happy, and desirable long after that. I love the friendships. The fashion is great. I am sad that Samantha isn’t there, but I think they handled her exit respectfully. I am glad they’ve made the show more diverse and less white-washed (and I really hope the new characters – especially Sara Ramirez’s character, the best part of the show IMO – get their own storylines and more air time).

Why couldn’t we get a happier show? My attitude is still, “I’ll take it.” I want to see where it goes, I love these women! But this isn’t the show I wanted.

How are you feeling about the reboot? Let’s talk about it!