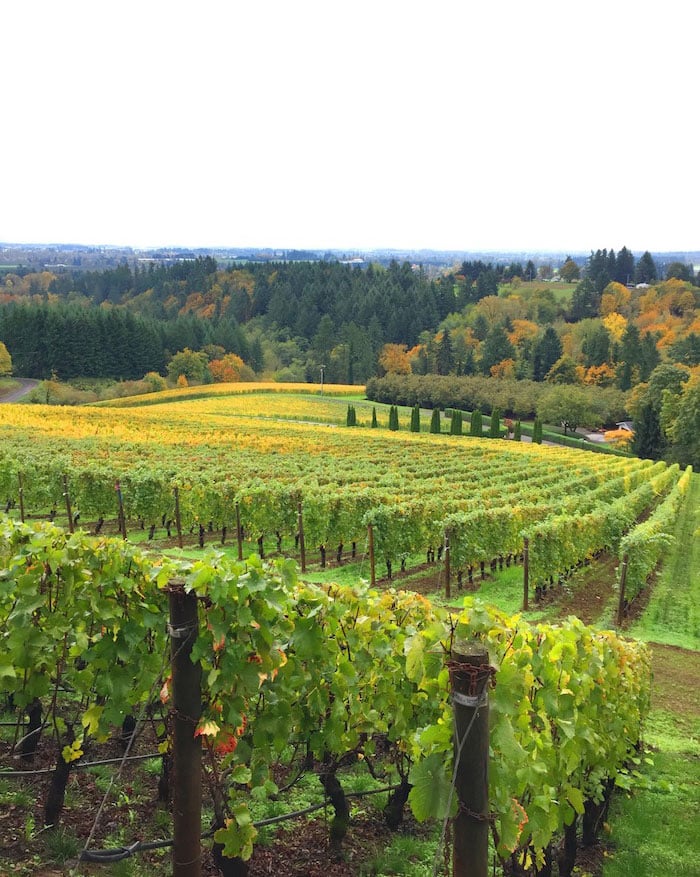 One of the highlights of this past weekend’s trip to Oregon (more on that later!) was a day in the Willamette Valley. I had my first Willamette Pinot Noir four or so years ago (prior to that I rather ignorantly would only drink French wines) and my life was never the same. The Willamette Valley has some of the best wines I’ve ever tasted. Getting to visit with my sister definitely checked an item off the ole’ Bucket List. (PS – if you’re curious, Willamette is pronounced with a flat “a.” A good way to remember how to properly say it is that the locals say “It’s Will-AM-ette, damnit!” I’d been pronouncing it wrong for years so I thought I’d pass along that bit of knowledge…) 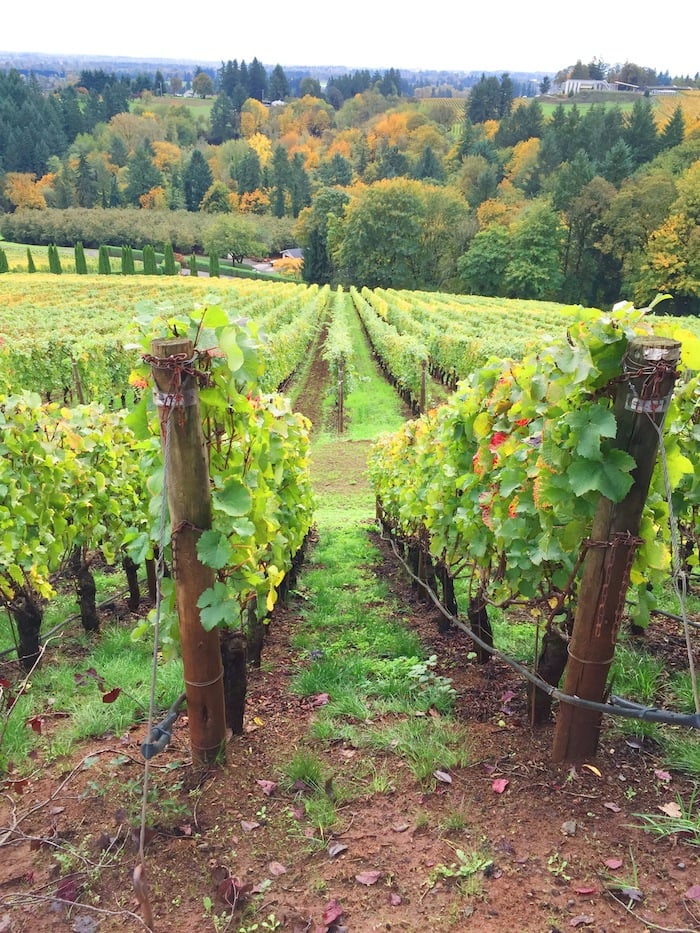 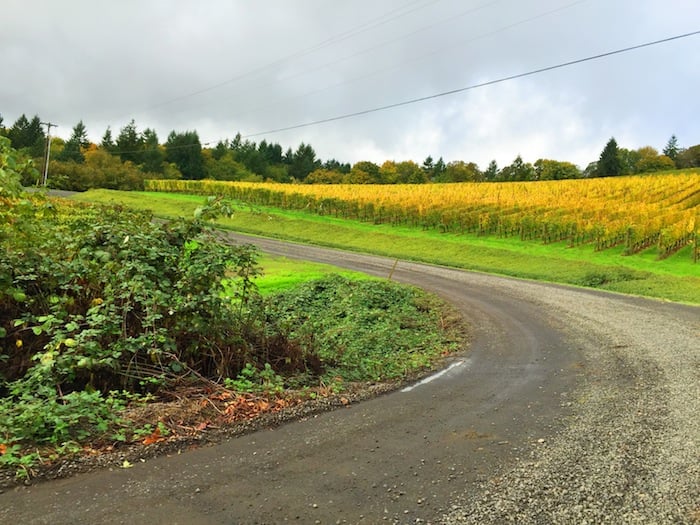 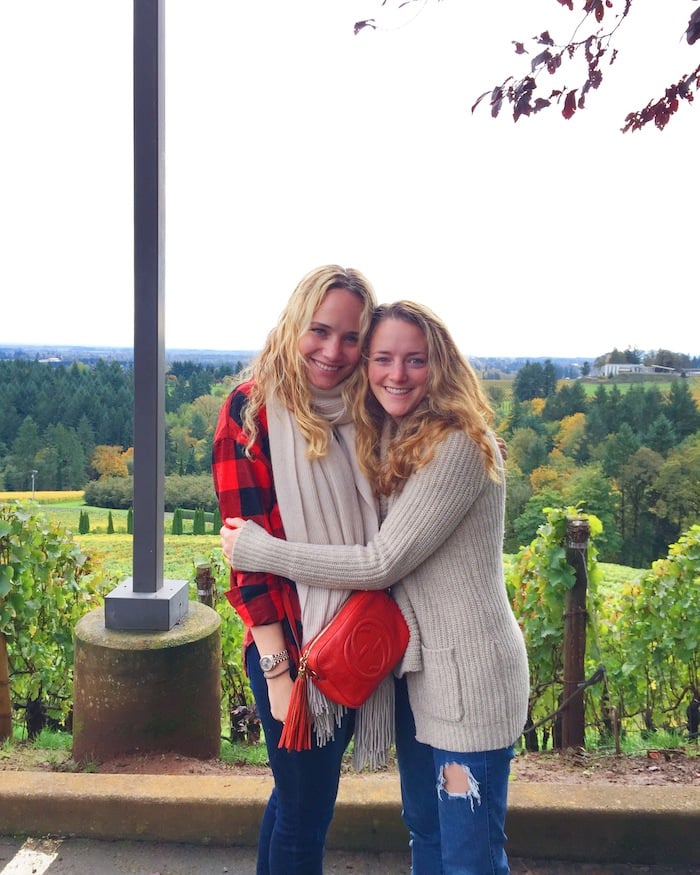 Stop one on our trip was Archery Summit. This was one of my favorite parts of our day as we learned so much about wine during our tasting. The wines we tasted were as follows: 2013 Vireton Rosé (I really loved this one and ended up having three bottles sent back to New York. It’s one of the best rosés I’ve tasted – so smooth… no bite at all!) I probably will hang onto it til the Spring, but it will be worth waiting for. After the rosé we moved onto the 2011 Looney Vineyard, then their 2011 Red Hills Estate, and the 2012 Arcus Estate.

It’s amazing how the climate every year makes the wine taste different… we learned about cool vintages versus warm vintages, and the impact of the minerals in the soil. For example, wine from the Dundee Hills is grown in soil with more iron + vitamins, resulting in an earthy/spicy finish. My favorite wine from Archery was the 2011 Red Hills Estate. They described it as the most masculine of all of their wines, and the best to pair with foods.

Their vineyard and tasting room is really beautiful… and they have a lot of fun events throughout the year. In the summer (July) they hold a Swine + Wine Event… and in January they have a Crab Feast in their fermentation hall. If you’re planning a trip to Oregon, keep these dates in mind! 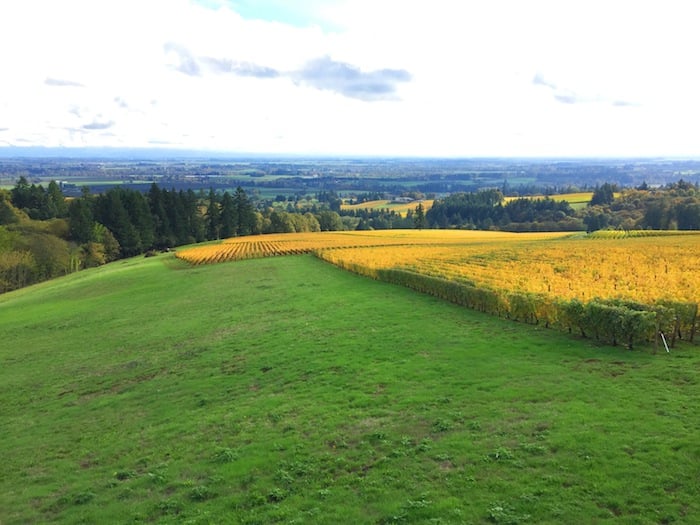 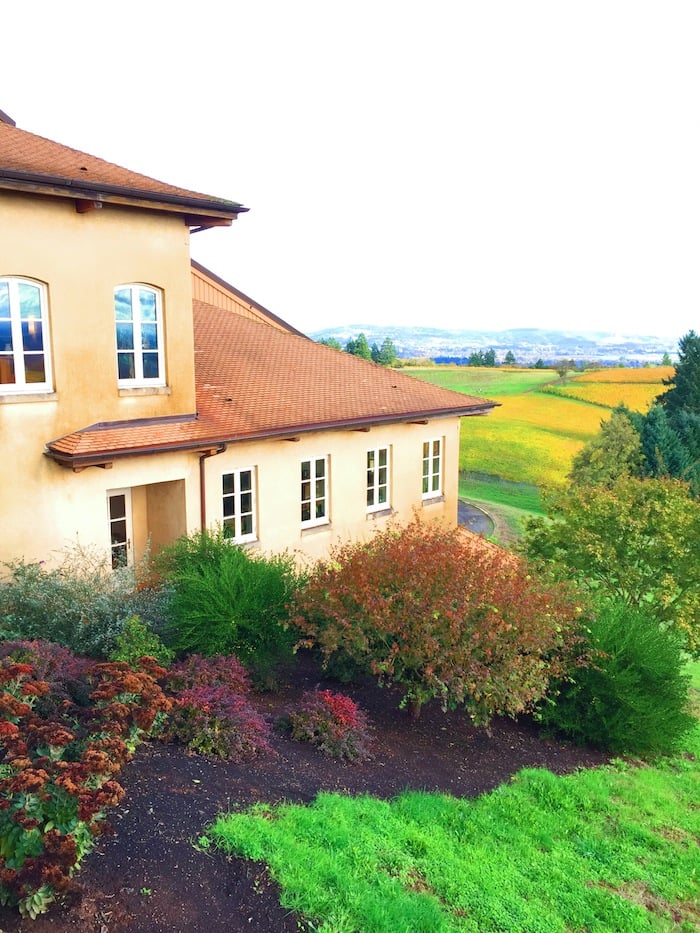 Next up was Domaine Drouhin. As an aside, I had been really excited to visit Drouhin as their winemaker consulted for my favorite more affordable wine, Cloudline. I’d been hoping that they’d carry Cloudline but alas, they did not. I asked them where to buy it and they told me to go to Costco. #fail… guess my taste isn’t as fancy as I thought! In other news, I stand by Cloudline. It’s a $17 Pinot Noir from the Willamette Valley and so good… it could easily pass for a $40 or $50 bottle. If you see Cloudline at your local wine shop, give it a try. It’s an amazing value for the price.

A little history for you on Drouhin… Drouhin’s heritage is in Burgundy, France.  The winery began in the 1880’s, (founded by Joseph Drouhin.) In 1987, Josephs’s grandson Robert came to Oregon and opened up Drouhin’s first (and only) US offshoot. It’s still tiny compared to their French counterpart (only producing 16-18,000 cases a year vs. 300,000) but still does quite well… and remains family owned and operated.

I thought it was really interesting that Domaine Drouhin is the first gravity winery… there are no pumps used, the wine just makes its way down the hills naturally. Another Drouhin fun fact is that their wine maker goes to a tree auction every year in France, where she hand selects the trees for the wood of the barrels. Talk about attention to detail!

At Drouhin, we went for their Pinot Only tasting. We started with their 2012 Dundee Hills (a best seller — and in distribution in all 50 states) and then moved onto the 2011 Fixin Clos de la Perrière… finishing with the 2011 Laurène. My favorite was the Fixin. 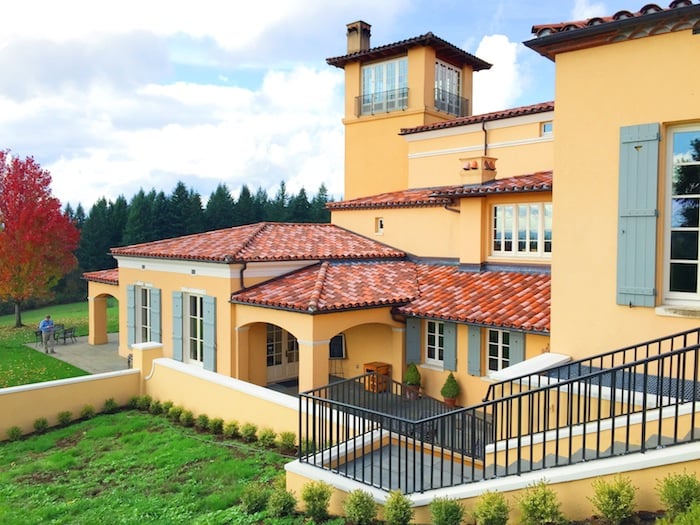 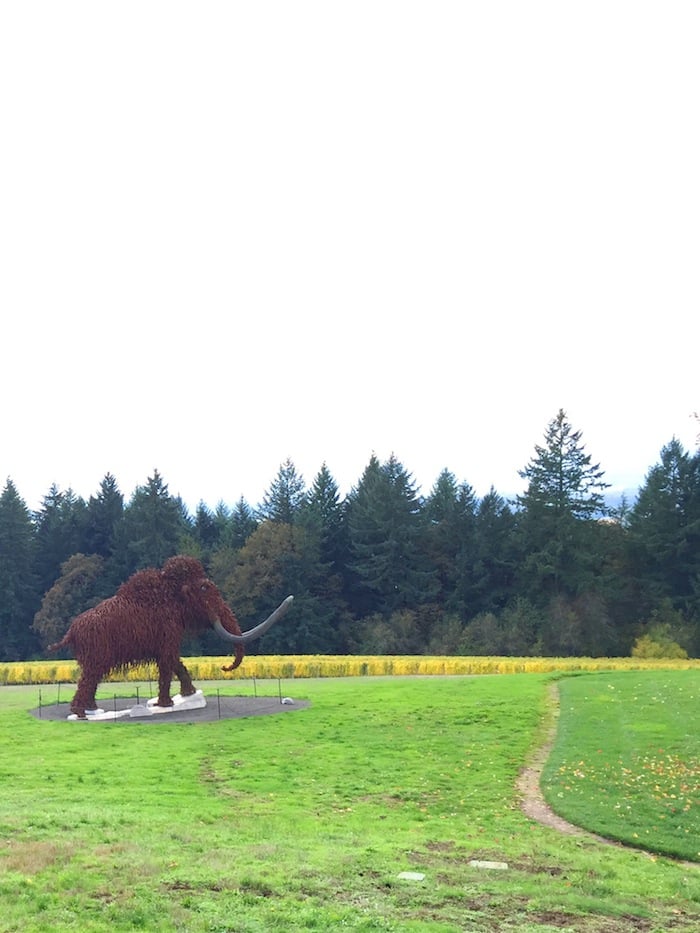 Our third stop was Domaine Serene. In my opinion, this was the best wine of the trip. My parents have always sung Domaine Serene’s praises and they carry a few of their wines on their wine list at their restaurant on Cape Cod.

My favorite wine that we tasted at Domaine Serene was the Yamhill. I had thought the Evenstad would surely be my favorite given the awards it has won, but the Yamhill was just so delicious. Rich (our wine guy) described the Yamhill as the Evenstad’s little sister because it’s so easy to drink – with or without food. He actually referred to it as a “porch pounder…” which is kinda hilarious… perfect for sitting outside and er… pounding? I could see his point as it does go down rather smoothly, but at $45 a bottle I wouldn’t pound this. I’ll be saving mine for special occasions. I ended up sending four bottles of the Yamhill home, along with two bottles of the Evenstad. 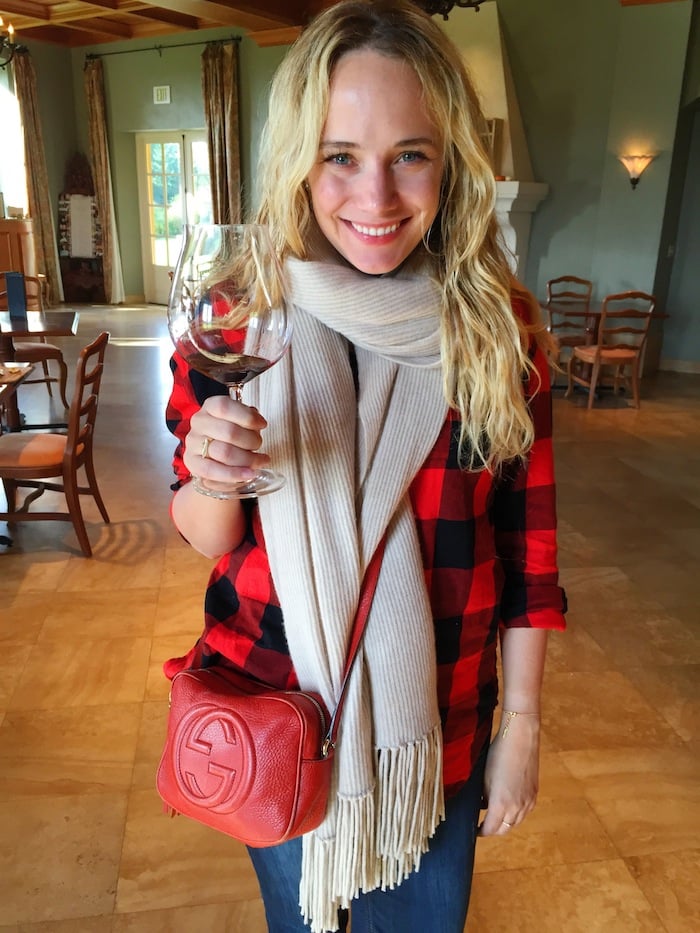 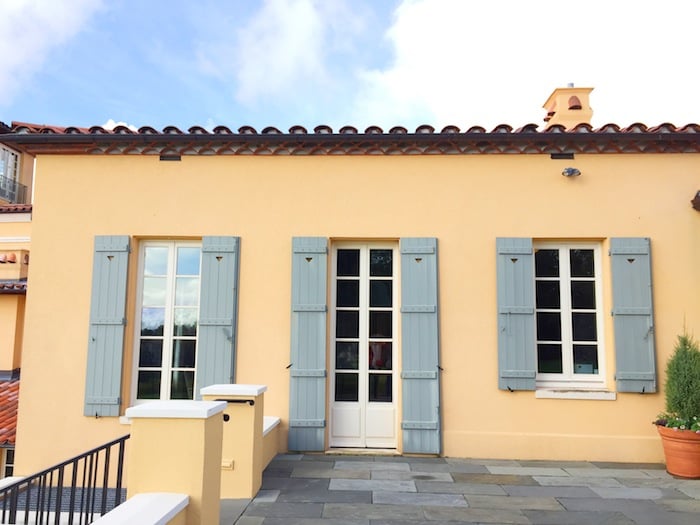 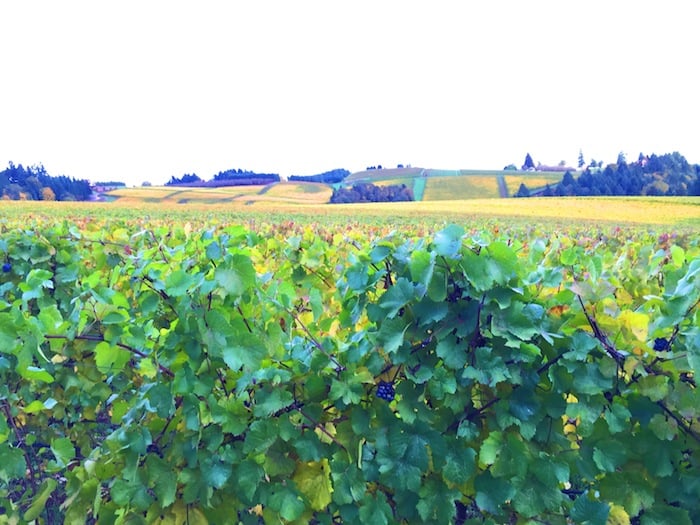 Our last stop was at Erath Winery! Here, we actually tasted six wines with their Pioneer Wine Flight (a steal for only $10 each.) Luckily, they were smaller pours. My favorite wine here was the 2011 Prince Hill Pinot Noir (from the Dundee Hills.) We split the Vintner’s Tray as by that point, we were extremely hungry! 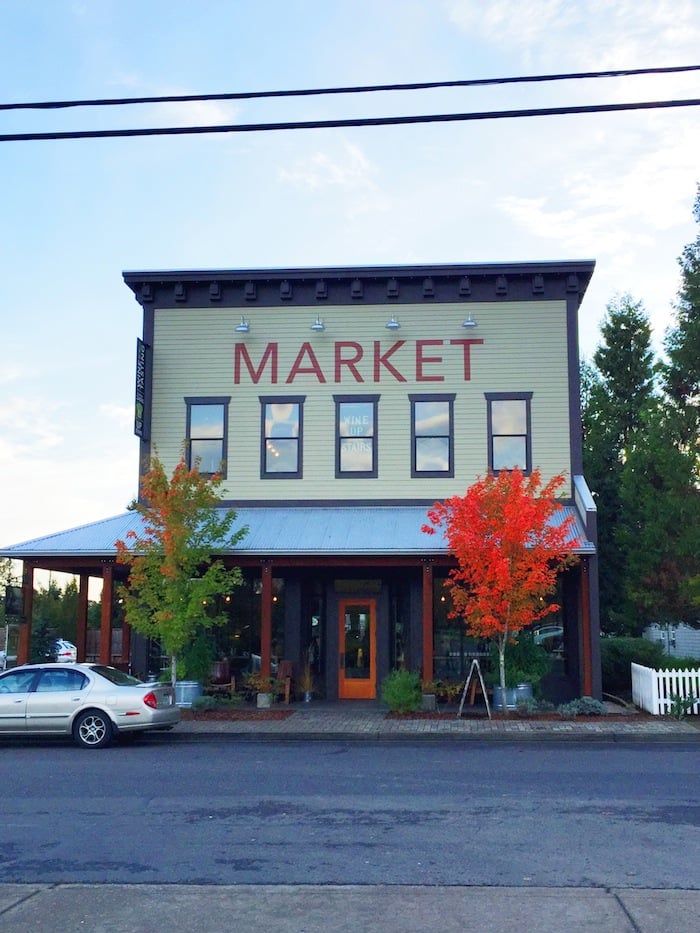 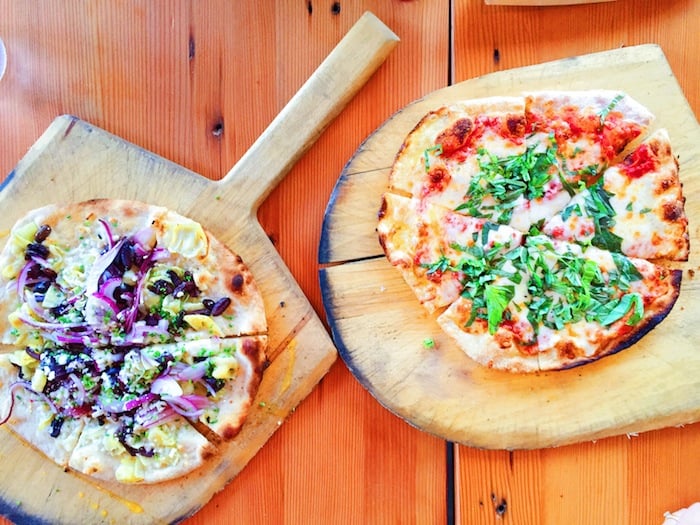 We ended the day with some very necessary feasting at Red Hills Market. I highly recommend this place if you are looking for lunch or dinner while in Wine Country. The three of us split the Margarita + Artichoke wood-fired flatbreads and they were absolutely amazing. It’s a cute, low-key spot with really great food.